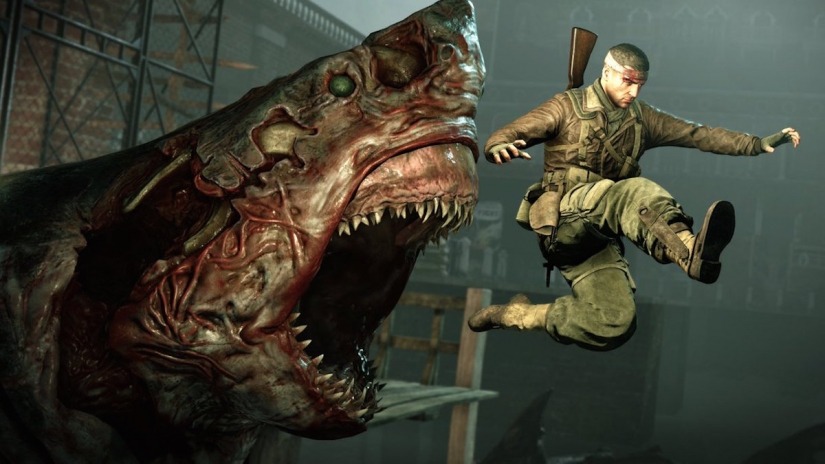 Zombie games are fun. Zombie games that have undead sharks and a zombie Hitler that you can completely pwn? Even better. That’s exactly what Rebellion’s Zombie Army 4 has to offer and it’s one of those games that is what it is and what is it offers a really enjoyable co-op experience that is simplistic and with one simple goal in mind: unfiltered fun.

In recent years, the gaming community has adapted this “all or nothing” mentality when it comes to how we receive and perceive games. If it’s not instant Game of the Year worthy it’s seen as somehow “not worth it” but not every game has to be the best of the best, sometimes it’s just about enjoying the ride and having fun. That’s exactly what the studio behind Zombie Army 4 had in mind and it’s exactly what they delivered and with Valentine’s Day coming up … I mean, we are not saying you have to play with a partner but nothing quite says Amore like killing hordes of heinous zombies together. That’s love, my friend, that’s love.

Breaking down what Zombie Army 4 has to offer

It’s definitely possible to play solo in Zombie Army 4 but where this adventure truly shines is in its co-op. Personally speaking, this is one of those co-op experiences that resonated really well with me and it instantly gave me flashbacks to really good memories playing games like Left 4 Dead and Killing Floor with some of my closest friends. One thing I love to tell people when I’m describing the latest Zombie Army is that it plays like if Left 4 Dead had a drunken bar love affair with Killing Floor 1 and shipped off their lovechild to study abroad and came back sporting a renewed love for espresso and adventure.

That’s it, that’s the entire franchise in a nutshell.

The combat in Zombie Army 4 is incredibly straight forward with a pretty clear cut objective to either smoosh or be smooshed by feral zombies. Not being smooshed is a pretty good goal and this invariably sets up for some pretty hilarious scenarios when playing with friends.

The mechanics of Zombie Army 4 are designed around co-op enjoyment, and this is definitely evident in the campier 80’s horror aspects of the game. One such example is seemingly having zombie parties on top of your face while desperately clinging to life after getting knocked down. It’s possible that this was a glitch but if it was, I hope to god Rebellion keeps it because watching a group of zombies and their sick dance moves on top of my dying face was a real treat – let me tell ya.

Remember friends: it’s a feature, not a bug.

The Turtle Beach® Stealth 300 gaming headset for PS4™ Pro, PS4™ and officially licensed for Xbox One, delivers powerful amplified sound to immerse you in your games, movies, and music.

As for how the play experience unfolds, it allows up to four players to go toe-to-toe against the undead with various weapons found throughout the map. Players can upgrade said weapons in between waves, and that ability to upgrade adds an immersive layer that lets the experience feel much more tailored.

Assuming you’ve got a similar taste to me when it comes to the ability to customize your loadout, you’ll find that the weapon attachment and upgrade systems are pretty satisfying and straightforward. It’s intricate without being confusing, so it doesn’t end up feeling like a chore which is an easy trap to fall into. From functional changes to cosmetics (golden pistol, you betcha) – and of course the skill upgrade system, there are many ways to improve the situation in-game when taking on the undead. Sure, you can just blindly shoot into the hordes, but trust me – that method will only get you so far, especially when playing the game’s Horde mode.

Zombie Army 4 has the traditional archetypes found in these sorts of games including Karl the sniper, June the healer, Shola the explosives expert, and Boris who fills the traditional tank role. Personally, I like to go full bore so I went Boris 90% of the time so I could just dive right in and cause mayhem. That being said, Shola was pretty fun to play too, who doesn’t want to make things go boom?

The Horde mode equal parts campy and terrifying, which is pretty funny if you’re like me and are weak in terms of being a panic shooter to the point of hilarity. If you’re familiar with Call of Duty’s Zombie mode, then Horde will feel very comfy because it operates much in the same way with a few differences.

How it works is that the Horde mode will pit players against waves of zombies scaling which end up scaling up in difficulty. While trying to take as many out with you as you can while just trying to stay alive, players will also find themselves in a rush to get different weaponry, which can also be found throughout the small map area. Usually, you’ll start out with Not The Best (TM) weaponry, but that can change if you don’t mind hunting around for a bit.

Death is not the end…

Zombie Army 4 isn’t trying to be Game of the Year. While it’s easy to compare this game to titles like Left 4 Dead and the Killing Floor franchise, Zombie Army 4 more stands on its own two feet. From the various maps found with over 30 missions to play to its Mortal Kombat-Esque kill cams…to undead sharks just chilling around AND the upgrades system, it’s not trying to be anything it’s not – it simply is what it is and that is a very fun co-op experience. Players will get exactly what they think they will get, no hidden surprises and no false promises. Just zombies, bullets and the occasional shark.

Oh, and we did mention zombie Hitler? Because, yeah … It looks like someone got back from hell(where we specifically went and sent him LAST time…) and needs to be filled with plenty more holes again for his return trip.

You can check out Zombie Army 4 for yourself on Xbox One, PlayStation 4, and PC! 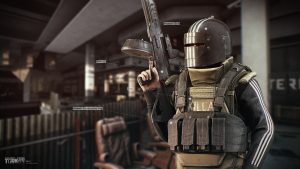