Exploring the post-apocalyptic world of Far Cry New Dawn can be lonely, so why not spice it up with some music? The Audiophile mission in Far Cry New Dawn is a collectible quest that tasks games with finding music players around the map. To start the quest, players will simply need to find one of the MP3 music players, at which point the mission will unlock.

There are 10 music players in total to find in Far Cry New Dawn. For each music player you find, a new track will be added to the Survivor Radio playlist. The Survivor Radio only unlocks once the Homebase reaches level 2, so take the time to make the necessary upgrades! These music players will be playing music, which makes them pretty easy to find. That is some crazy good battery life right?

One of the first music players can be found north of Prosperity in Bradbury Woods. Head to the river and look for the building, inside you’ll find the music player on a shelf.

Another music player can be found east of Prosperity near a river. This location is called Big Mike’s Dale, and around the back is a hatch in the ground surrounded by garbage. Go down the hatch to find the MP3 player on a table near a toolbox.

This music player can be found at the lake at Deadgas Crossing, just below the mountain. Look for the boardwalk leading to a little cabin. Inside this cabin you’ll find the music player on some shelves. This building can also be entered through the back using the grappling hook.

Another music player can be found in the east of the map, to the north east of the main mountain. Look for an area called the Forgotten Barracks to find an overgrown cottage. Head inside and collect the barracks key from on top of a broken crate. Open the locked door using the key to spot the music player in the next room on top of some drawers.

To find this music player, go to the western side of the map to find a cave called Frobisher’s Memory. Go inside the cave and follow the path down to a little living area. Climb to the upper level to find a backpack and the music player on a table.

This music player requires a lock pick to retrieve, so make sure you’re all set. Go to the eastern side of the map to find an area called Rotgut Pass. There is an old dilapidated house with a weapon table nearby. Use the window on the side of the house to gain access and then pick the lock on the door. Search the toilets to find the music player.

There’s a mountain on the eastern side of the map, on top of which is an area called Sein’s Sanctuary. Look for the garden out the back of the houses, there is a hole in the ground covered with wood. Break the wood to reveal the music player on a rock near some loot.

Follow the traintrack down the western side of the main river to reach a location called Surgey’s Place. You will come across some train cars, with one all boarded up. Break down the boards and go inside to find the music player on a box.

This music player is located in the northern side of the map to the south of the little island that is connected to the main area by a bridge. Here you’ll find a location called Tombwater. Enter the building nearby, pick the door at the back, and look for the music player on the sink.

With all the music players collected, the Audiophile Achievement or Trophy will unlock and you can get back to business. Finding the best guns to help you survive the wasteland… 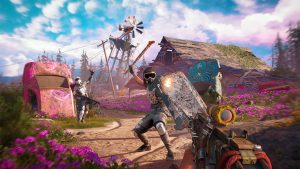 Hope County calls again, except this time things look a bit different. Far Cry New Dawn sees players return to the world they explored back in Far Cry 5, but instead of rolling green fields, a post-apocalyptic wasteland awaits.