Let us help make your loops a little less lethal - for Colt, that is

If you’ve spent any amount of time on the internet recently, you’re probably getting a feeling of déjà vu from how often Arkane’s new time-looping shooter is brought up. In the cat and mouse game between two assassins, weapons are inevitably an important part of the gameplay and the right choice of firearm can make all the difference between a final winning flourish or ending up face down on the streets of Updaam. As luck would have it, here’s a guide to the best weapons in Deathloop to help you out of such sticky situations.

Colt and Juliana are big fans of pointing guns at each other.

First thing’s first: let’s talk rarity. Ordinary weapons have four orders of rarity as distinguished by what colour background they have and the number of corresponding Trinket slots. Grey weapons have no Trinket slots, greens have one, blue have two, and purple have three plus a Perk. The cream of the crop, however, are gold weapons.

These aren’t just rare — they are one of a kind. These weapons have three Trinket slots, a Perk, and an additional feature. As they’re only available in a particular location and time in the game, you’ll have to complete their associated side quests (known as Arsenal Leads in Deathloop) in order to get your hands on them. 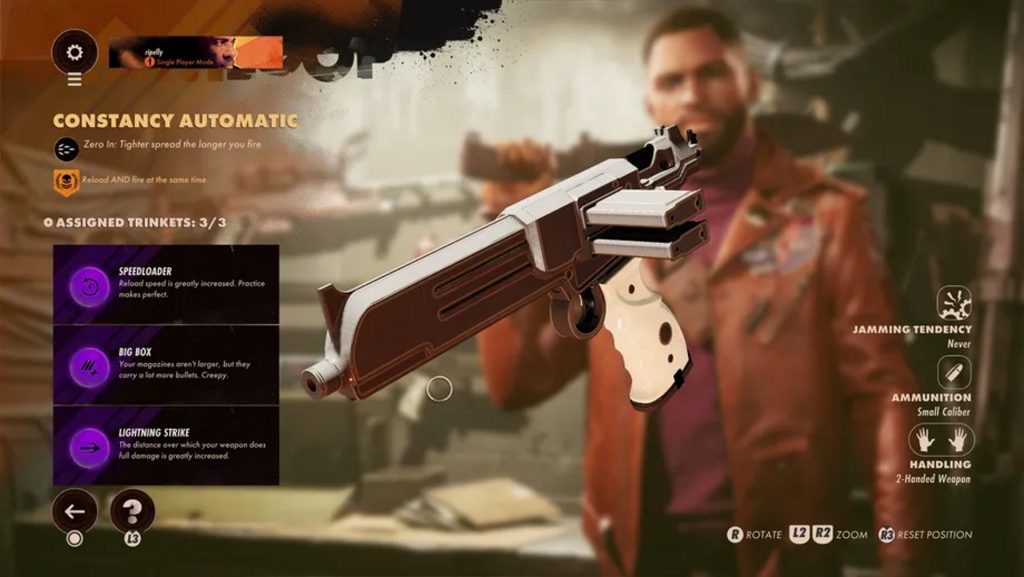 The Constancy Automatic is perfect for players who never want to stop shooting.

The first gold weapon we’re going to look at is the Constancy Automatic. The USP of this custom, two-handed SMG is that it has two clips, so you can fire and reload without pausing. If you want to save time and go on a shooting spree, this would be a good choice.

Unlike other Gold weapons, the Constancy isn’t actually earned through an Arsenal Lead — it requires a Visionary Lead instead. You’ll need to take out and loot Ramblin’ Frank Spicer. More specifically, you’ll need to visit Fristad Rock in the morning and follow  “The Ballad of Ramblin’ Frank” Lead. 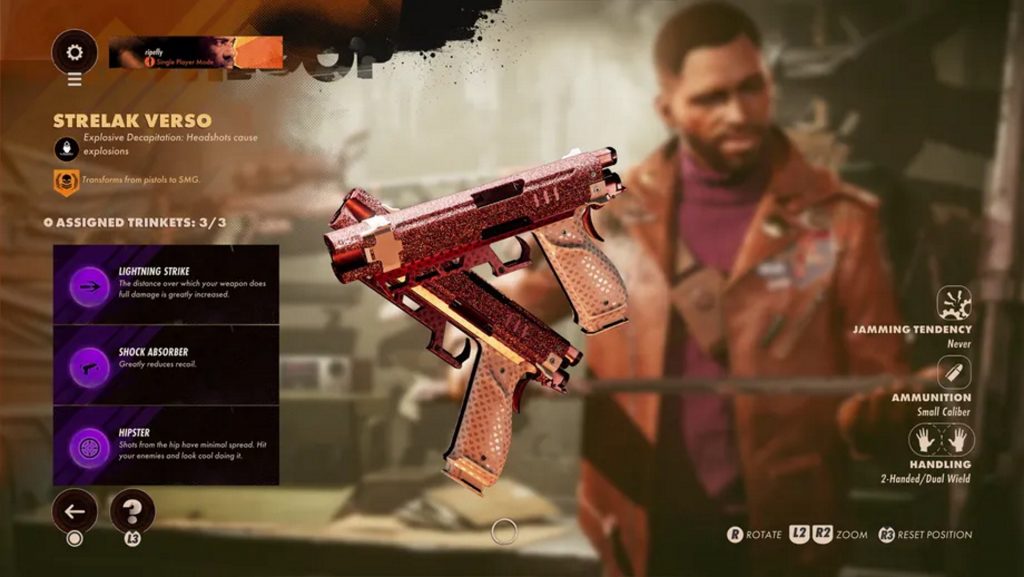 The Strelak Verso is a flexible option for trigger-happy players.

The next gold weapon on our Deathloop roster is the Strelak Verso. If you want to go all-in on gunfights and not fiddle around with the magical power of Slabs, this will likely be the weapon for you. It’s also very versatile as you can dual wield it as handguns or heft it as a two-handed machine gun. In either case, you won’t be able to combine it with Slabs. To get the Strelak Verso, you’ll need to visit The Complex at noon and complete the “In This Together” Arsenal Lead. 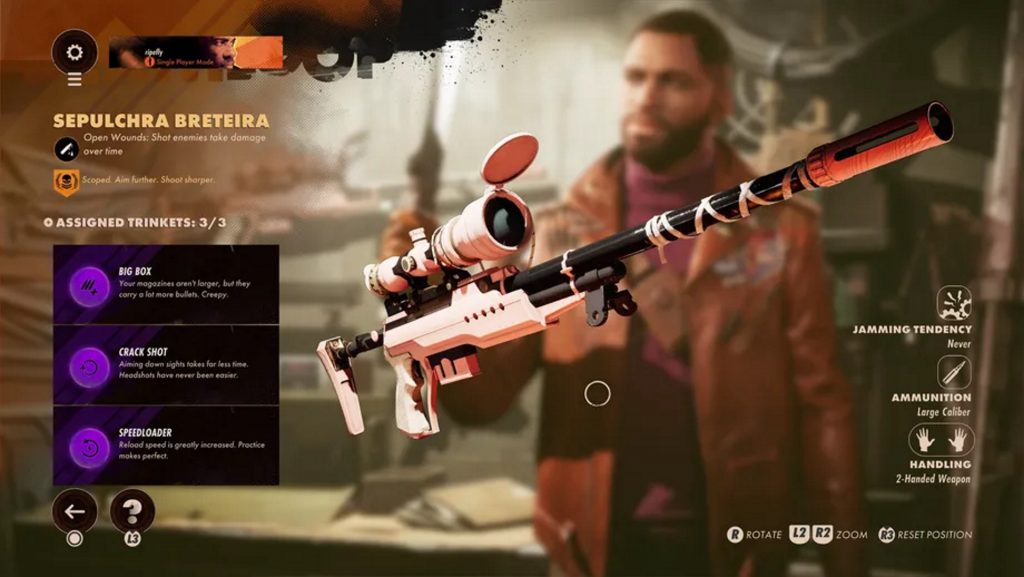 Prefer dealing death from a rooftop in the distance? The Sepulchra sniper rifle is for you.

The Sepulchra is a sniper rifle, so you’ll want to bag this if you prefer to take out your targets at long-range. It’s quite similar to other sniper rifles in the game in that it has a one-shot-reload, so you’ll want to factor that in. Still, the Sepulchra has added accuracy over greater distances — this is the Rolls Royce of long-range weapons in Deathloop. If you want to nab it, head over to Updaam in the afternoon and challenge the “Keep on Giving” Arsenal Lead. 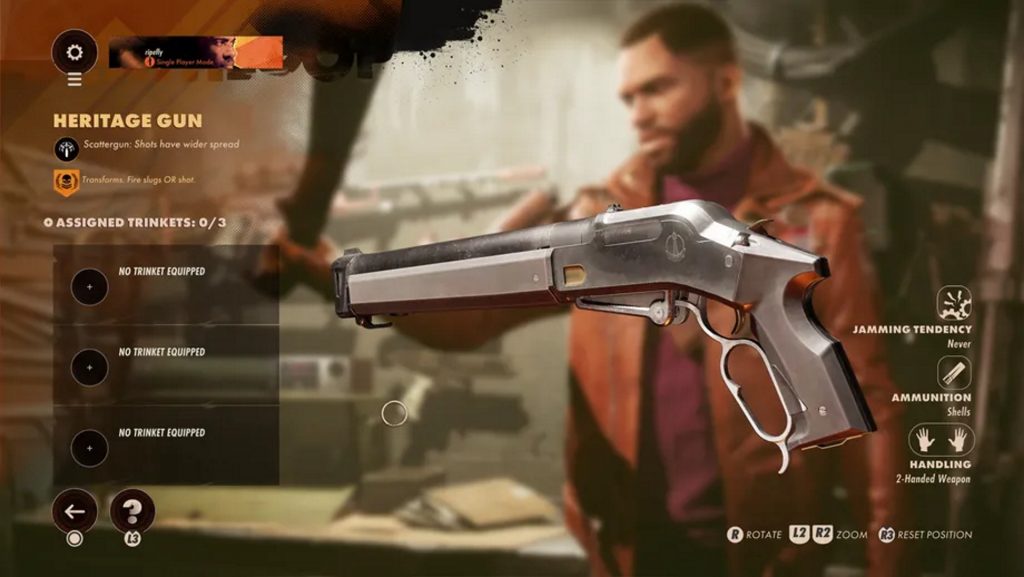 It may be hard to obtain, but the Heritage Gun is well worth the effort.

The Heritage Gun will likely live up to its name by being part of some legendary gameplay moments in Deathloop. It’s both a shotgun and a rifle, and its versatility between these different modes makes it highly desirable. Perhaps this is why it is likely the hardest gun to acquire in the game: you’ll need to take on the appropriately named “Super Shifty” Arsenal Lead in Karl’s Bay during the evening in order to get your hands on it.

If you’re playing as Julianna in PvP mode, you’ll be able to pick three weapons out of a roster of four in her loadout. You’ll unlock more as you improve your Hunter Rank, but which weapons you receive is entirely down to chance.

Probably the most important thing to keep in mind is to choose guns with different ammo types so that you don’t rely too much on one. If you’re playing as Colt against Julianna, your best bet is to combine the Havoc Slab with a shotgun — Havoc will reduce the damage you take, allowing you to rush her down more effectively.

With these tips in mind, you can hit your enemies in Deathloop with your best shot!