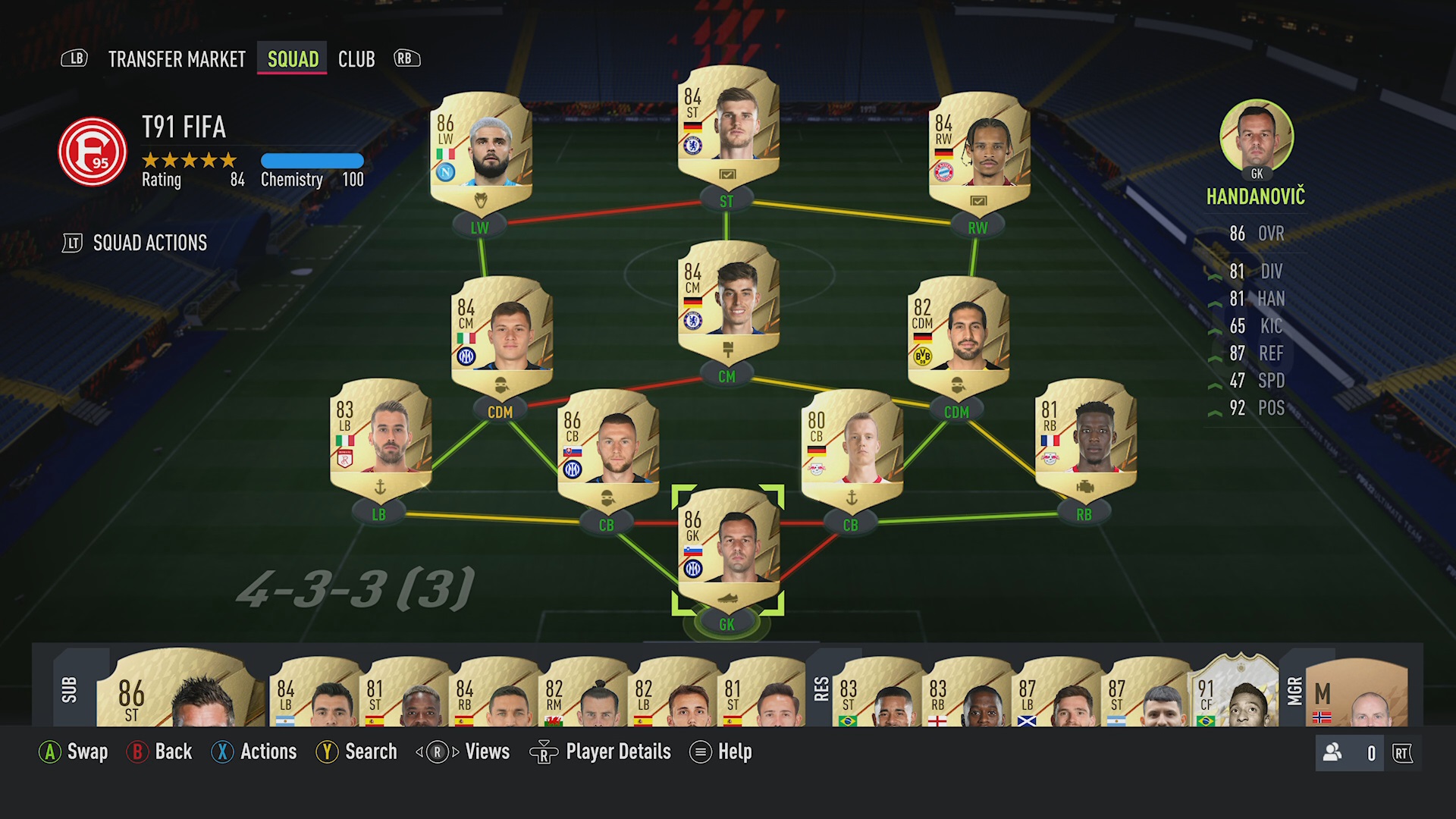 FIFA 22 has launched and the football simulator brings a lot of familiar mechanics, but also introduces some new ones! No matter whether you’re a novice or expert, there’s a number of things you can learn in and out of the game to improve your efforts. If you’re just getting into the game, you may find yourself behind the curve as players have had access to the game early.

We’re here to help make your first few games on FUT a bit easier. Here are our tips and tricks to improving in FIFA 22’s Ultimate Team.

Every year, there are one or two formations that tend to work much better than normal. I would always advise you to pick a formation that compliments your playstyle:

Your formation is only one part of the puzzle because you’re going to need to pick a formation and corresponding tactics to go with it. Finally, you need to ensure you have the personnel to fit that style of football! There’s no use picking a defensive formation if your defenders and midfielders have high attacking work rates and low defensive work rates. 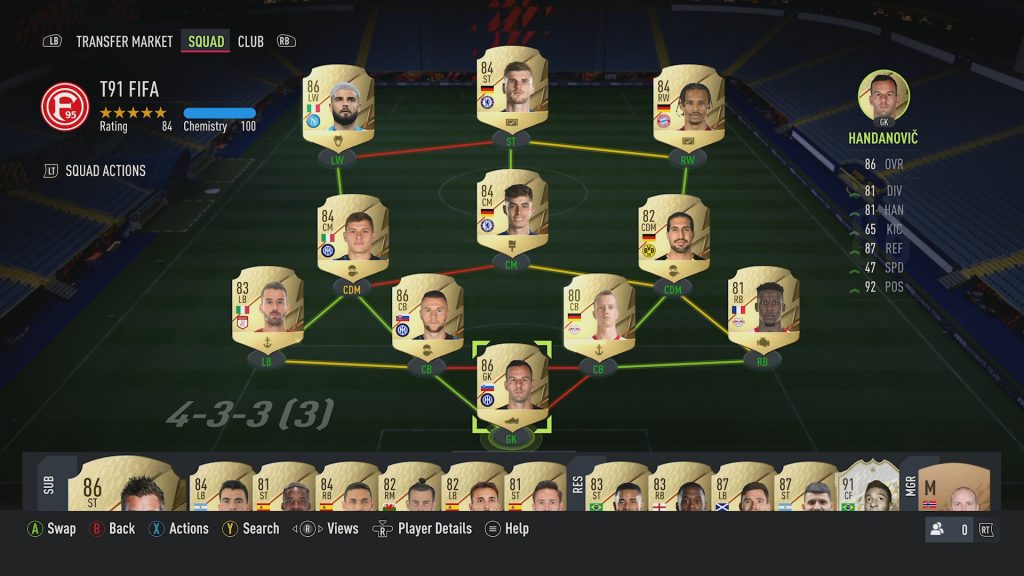 Be sure to play to your team’s strengths!

I think 4-2-3-1 is again the best formation for overall play. The two defensive midfielders provide you great protection while your four attackers get busy behind the lines and overloading in the final third. It also gives you a lot of options when playing the ball out. Not only that, it stretches the defence and opens up pockets of space in between the defenders. 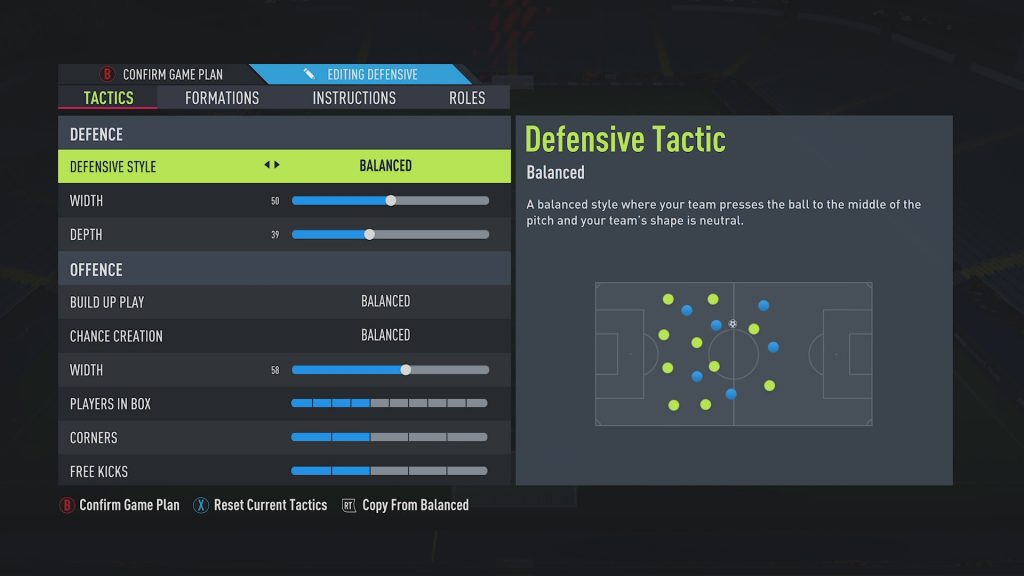 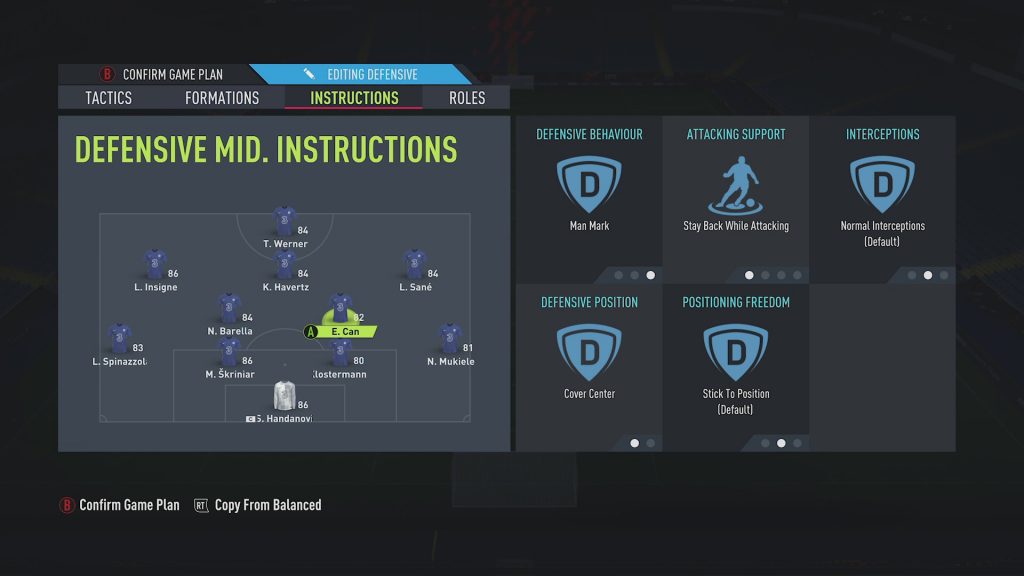 Take the time to apply instructions to your players

It’s important to assign the correct instructions to your midfielders. I ensure I have one midfielder with high defensive work rates and set to stay back while attacking to ensure I’ve always got someone breaking up play in front of the defence. I’ll then ask them to Man Mark to prevent any passing opportunities.

My second midfielder has high-high work rates, creating a box to box midfielder that can get up and down to support attack and defence. This player has the cut passing lanes instruction so I have one player who’s aggressively forcing the issue and trying to win the ball back.

Chemistry And The Best Styles

If you know how Chemistry works, this isn’t for you, so feel free to skip this.

There are two types of chemistry in FUT, Player Chemistry and Team Chemistry:

There are 4 main factors that affect a players’ chemistry in FUT 22:

These factors will determine the overall player chemistry out of 10. You want to get as much chemistry as possible to improve your player’s performances – they will get a stat boost as well! But, if it’s low, their stats will suffer a decrease from the base number. 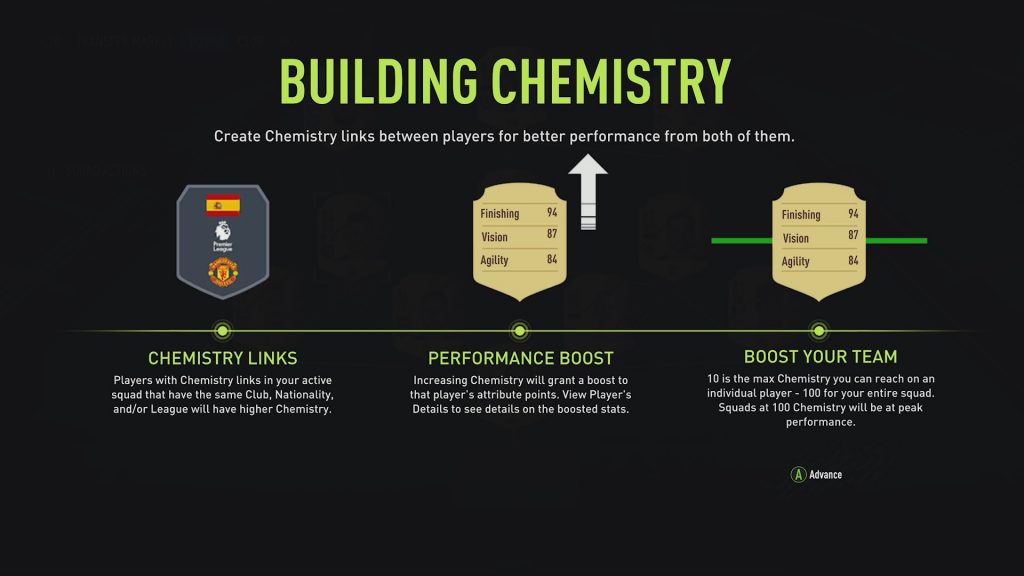 It’s all dependant on their position and the stats of the player, but generally, the best ones are used for almost all scenarios.

Complete SBCs To Get A Better Team

Before you even get started, you should be looking to complete the default SBCs that are present in the game. This is because they always pay out very handsomely. Yes, they can take a bit of effort to complete, it took me about 4/5 days to complete them. But, once I had done them I had a ton of coins to build a brilliant team (as seen above).

Be sure to save your untradables and be patient buying players on the market – do not use the ‘Buy Now’ option as you can usually save a couple hundred coins on open bids.  If you need to get loyalty with some SBCs, build the team and play some beginners Squad Battles to collect coins, XP and ultimately loyalty!

You’ll want to do this as soon as you can because they will become more expensive as time goes on. During Early Acess, player costs were very low, so this cost even less to do. Not every SBC you do will pay off as nicely as others, but you should walk away with more coins than you went in with. 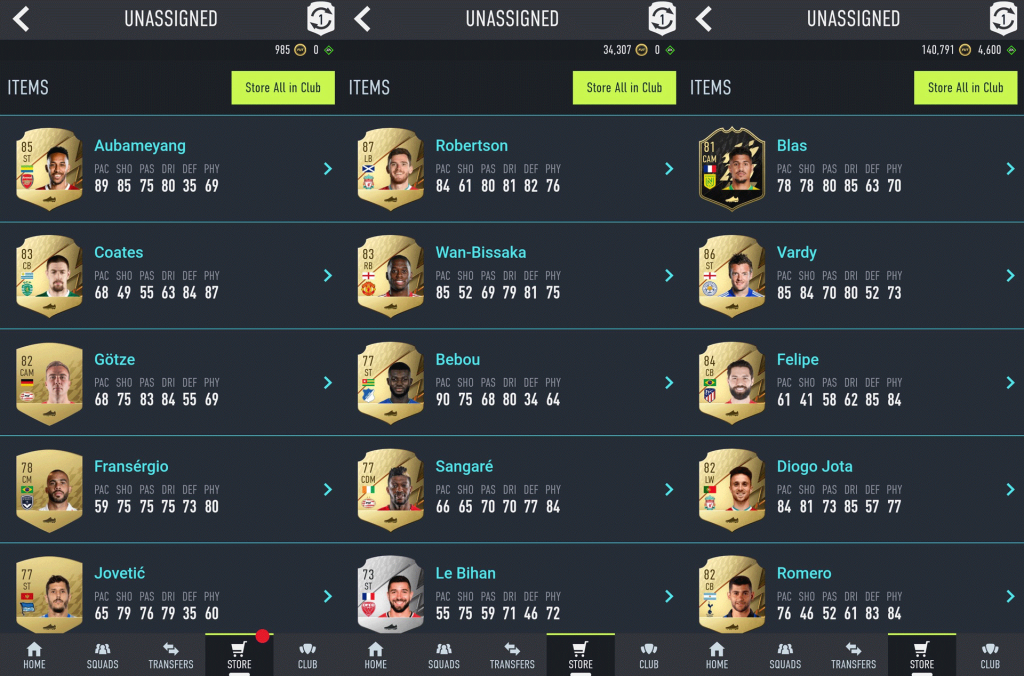 It’s something that has been quite “meta” for a few years now, but getting players with high agility is important. That doesn’t mean you need to get a full 11 with 90+ agility, but it’s helpful to have agile players if they’re going to be turning and moving a lot.

It’s very beneficial for midfielders who will be turning on the ball and looking to spray passes in different directions. It’s also important because the game can feel a bit “clunky” at times and be able to minimise transition times can be lifesaving.

If you’re building a team and your player lacks a bit of agility, no problem! Use chemistry styles such as Finisher, Artist and Engine to improve this stat. 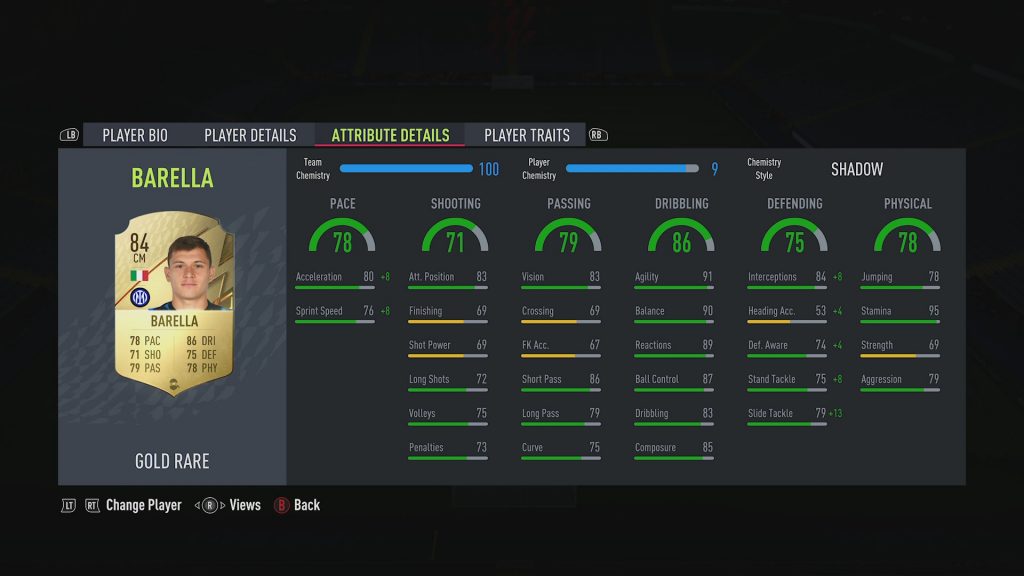 When you’re in attack, you’ll want to exploit areas of weakness in your opponent’s defence.

The best thing to do is use the LB button to initiate off the ball runs from your players. This will give you more options when going forward and can be incredibly effective against someone playing a high-press. In this example, my opponent is pushing up high on the pitch and trying to crowd out my midfield. They’re also using a compact formation, so I used the width to play the ball out from the back and bring it back across to disrupt his shape and create pockets for my midfield to work in. 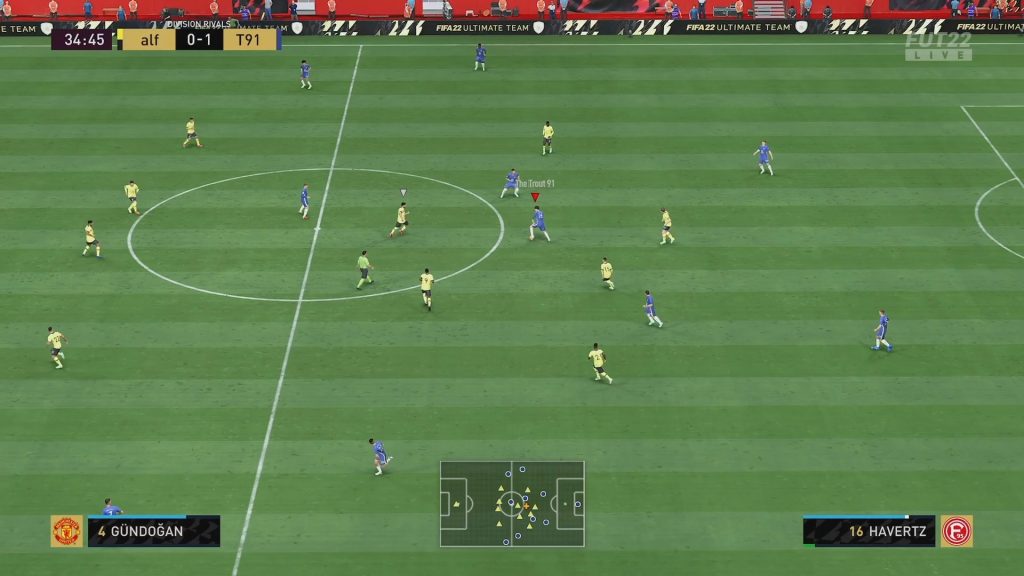 Once I had done that, there was a huge gap between his defence and midfield, so I exploited the space by using LB to push my attackers into it. I also used RB to pull Werner towards me and mask the off-the-ball runs I was committing to. Some quick passing kept the ball moving and left him unsure what to do next. 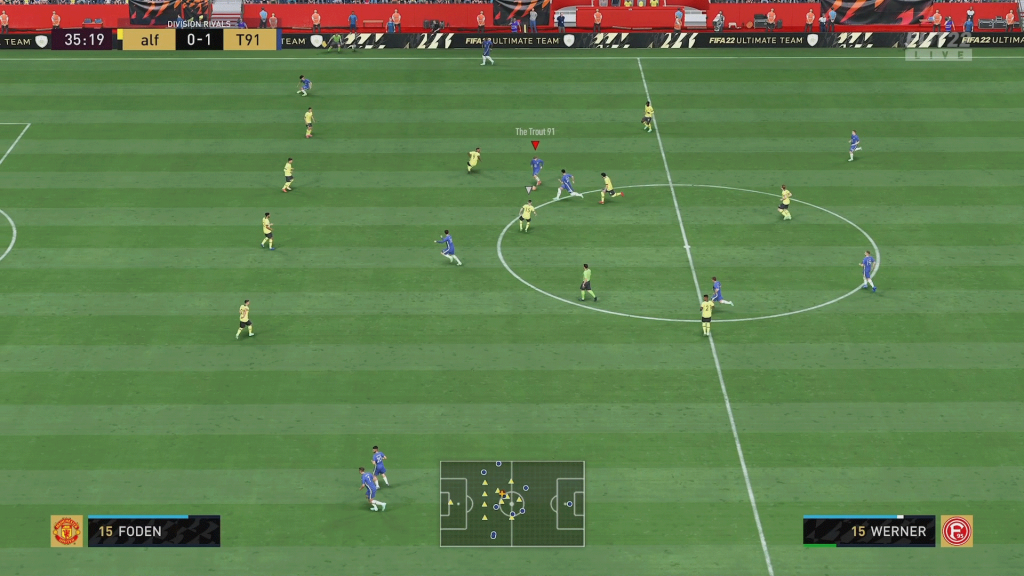 Exploit gaps on the pitch to gain ground and force mistakes

At this point, his defence are left with limited options but to step up and try to stop me from making my next pass. Because he does this, it leaves him, even more, exposes so I play the pass and use LB to continue Can’s off-the-ball run. Once Havertz get it, because I’ve invested in an Artist chemistry style (boosting his agility) he gets the ball and rapidly turns away from the defender to shield the ball, plays it into the path of Can who goes on to score. 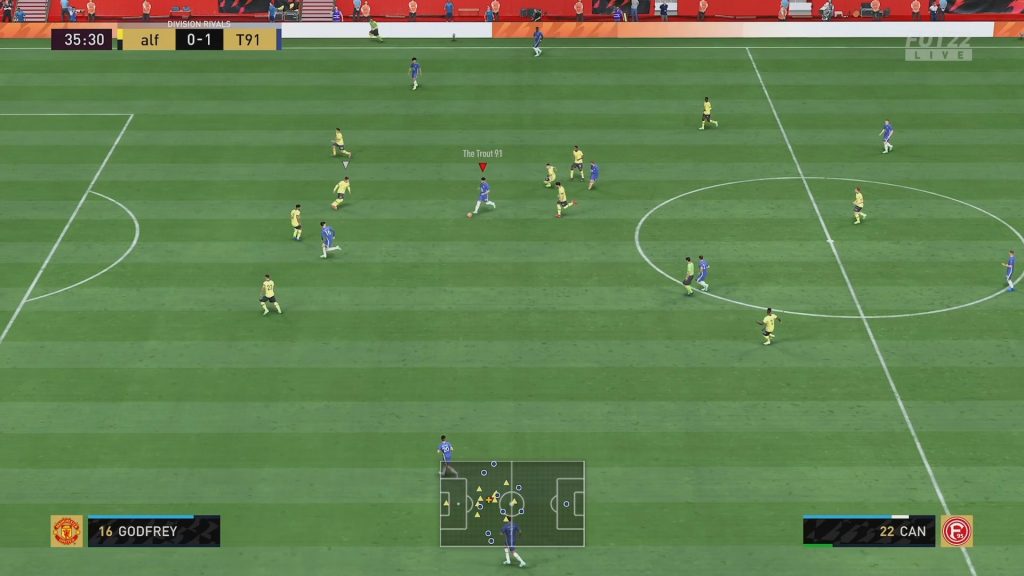 Sometimes you’ll need to show patience and not be afraid to take a few risks if you want to score. It’s important to mix up your playstyle, so having a few formations and styles works a treat to break down a stubborn player. If they’re able to read your decisions, they will get complacent and then throwing a curveball in there can upset them.

Defending requires far fewer actions, but requires so much more concentration. It’s not as simple as pushing a button and winning the ball, you’ll need to outthink your opponent and limit their options.

Why I tend to pick the 4-2-3-1 formation is due to the two defensive midfielders that allow me to break up play. I’ll use these two as my aggressive ball-winners to ensure I maintain shape and balance in defence. Sometimes you may be able to charge at an opponent and win the ball back, but it’s not always guaranteed.

The most effective strategy is to anticipate your opponent’s next move. In this scenario, I’m pinned to my 18-yard box and he has players posted up around me. So I take control of my defensive midfield and track the run of his next pass. This effectively blocks off any other options and he is then forced to pass another way, shoot or run with the ball. If he chooses to shoot or run with the ball, it’s great for me as it gives me the chance to slow him down and potentially make a mistake 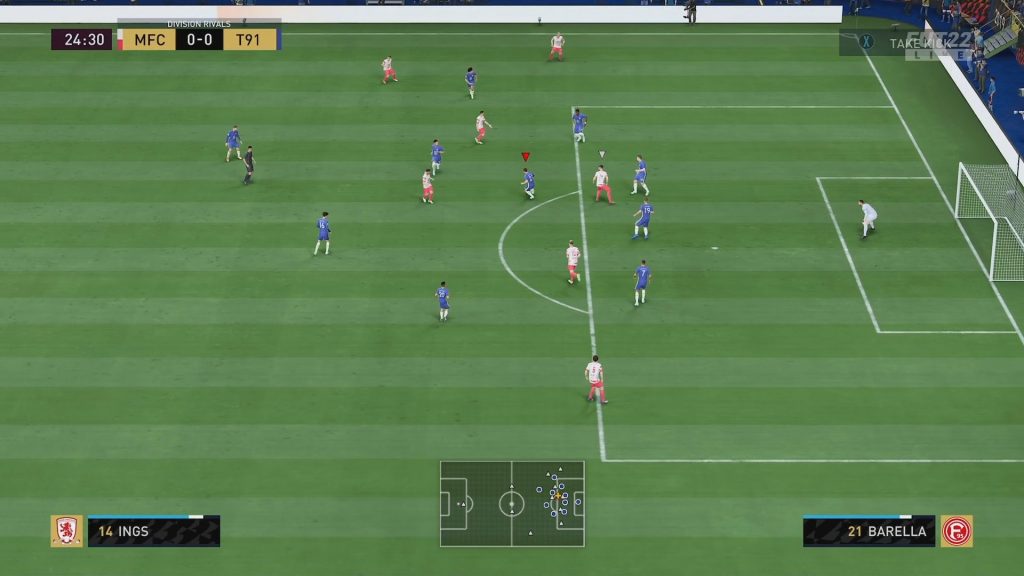 While doing this, I’ll use RB to second-man press (which automatically pushes my spare man to attack the player). Should he pass the ball on, I’ve forced him out wide and away from the danger zone, now limiting his options further. If he holds onto the ball, I can quickly switch and take the ball off him. Use the left trigger to jockey when approaching the ball and to run into the opponent and win the ball. I also use this in conjunction with the contain button to ensure a clean and precise take. Contain is also a good option for a more precise and safer take when in the box.

Here are some of the best and affordable players you can look to grab for your team: 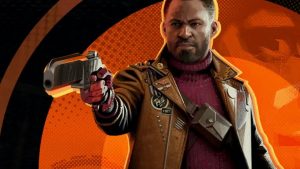