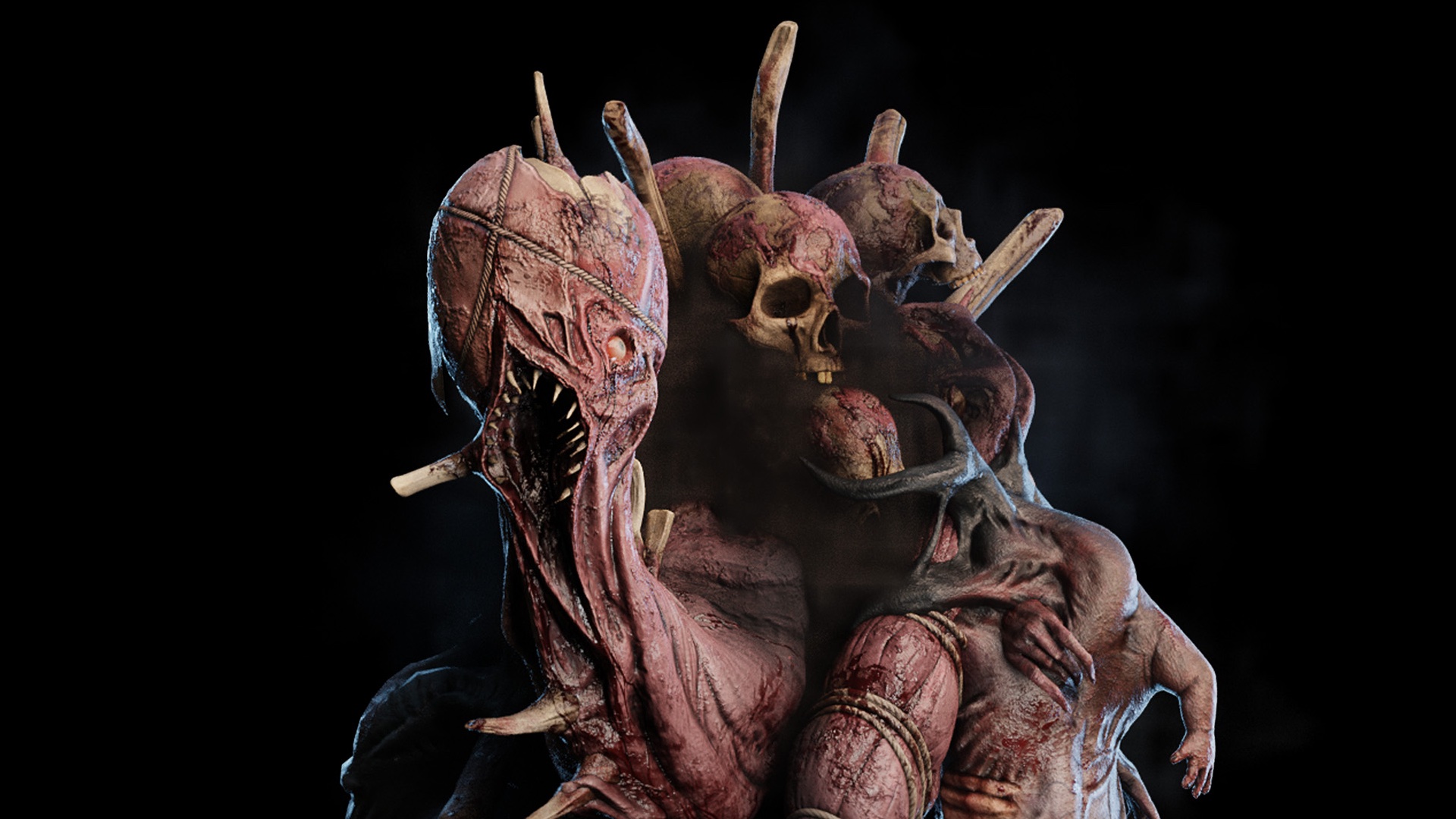 Dead By Daylight’s new Chapter 24 killer looks to have leaked and it allegedly is called The Dredge. The first details about the new killer was supposedly leaked via a PTB build of the game as Behavior Interactive prepares to get ready for its 6th Anniversary event coming later this month.  The leak also gives us a brief look at the new survivor, Haddie Kaur, who we’d heard was coming to the game some weeks ago.

Supposedly there’s also been a few leaks indicating what players have in store for DBD Chapter 25 and Chapter 26 too. Follow the links if you want to know more about those particular leaks.

For now, everything we know about the new killer ‘The Dredge’ can be found just below, so read on.

Here’s what we know so far about The Dredge’s lore:

The Dredge is a manifestation of the dark thoughts of a once-vibrant community and it’s lore is one of the most expansive we’ve seen. To make sure we don’t have you scrolling for ages, we’ve popped the official lore into this handy drop down menu, so if you’re not interested you can skip right over it.

The Fold was founded on a private American island in the 1960s by a group of anonymous philanthropists. Their goal was to establish a peaceful society free of dark thoughts and emotions, attracting the dismayed, disenchanted, and disillusioned from all over the country.

This peace-loving community thrived over the years, and members freely followed the dictates of its charismatic leader Otto Stamper who taught his followers the secret of maintaining happiness through joy-talk, meditation, and the endless reciting of ‘good-thinking’ mantras.

But not all was bliss within The Fold, and Otto swiftly banished anyone who confessed to having dark thoughts or speaking dark words. Those he appointed as guardians of The Fold were quick to root out malcontents, banishing anyone who thought or spoke against the almost perfect community he had established.

In this way, Otto had conditioned Ottomarians to believe dark thoughts were the root of all discontent. He spoke of an ancient god called, Druanee, telling them how this god fed on dark memories and desires and how they needed to expel any and all manifestations of darkness from their hearts for fear of summoning this horror from the Land of Shadows.

Life was more or less a Utopian dream on the island until, that is, the darkness began to slowly leak through the cracks of their spiritual dam and members began to mysteriously disappear.

It wasn’t long before fear closed its septic jaws on the island and refused to let go.

The once happy community now gathered in a few homes chanting all the ‘good-thinking’ mantras in a desperate attempt to rid their lives of this formless creature that seemed to stalk them in the shadows and consume them in their sleep.

Otto tried to quell his followers, telling them that there were malcontents among their ranks and that they alone had summoned the Druanee to their Garden of Joy.

As The Fold bleated fear, Otto evoked desperate measures. Ottomarians were restricted to their homes to prevent the spread of rumors and dark-talk while sleep was forbidden to prevent anyone from releasing dark dreams into the world. Freedom and sleep would return just as soon as the Druanee was no longer upon them.

But when Ottomarians continued to disappear, Otto assembled his followers near the beach where he placed a screaming woman on a wooden stage. There, in the rain, Otto explained to his drenched, alienated, and sleep-deprived congregation that the woman was a journalist here to destroy everything they had created.

As the guardians held the trembling woman, she screamed that Otto wasn’t the savior he claimed to be. He belonged to an ancient cult, an exclusive club of billionaires that took pleasure in corrupting and sacrificing people, towns and even countries to an Elder God. The journalist told them Otto hadn’t banished anyone! He had tortured and sacrificed them and that they would all be next.

Without hesitation, Otto slit her throat before she could continue to spread lies. As she collapsed to her knees with her hands clasped around her neck, he told his confused and terrified herd that she was working with others within their ranks and that they needed to find the impostors before the Druanee came for them all.

Otto’s words shot over the congregation and reached into the murky recesses of their hearts and dredged up dark and fearful things.

Years of suppressed emotions began to bubble up as a thick fog pushed through restless legs and feet. Whispers began, and the whispers became panicked mantras, and the mantras became screams and curses as each member accused the next of malthinking and malspeaking.

Over the howling wind and pounding rain, the screams and curses grew louder and louder as everyone desperately tried to contain the darkness within. But the harder they tried, the quicker they failed, and within moments the dam burst to release a torrent of hell.

Otto watched his once blissful and joyful herd suddenly erupt into violence unlike anything he had ever seen before. The Fold bleated accusations and tore each other to bits and pieces with hands and teeth and never once did they look up to see their kind and charismatic shepherd smiling down upon them with eyes that were cold, bleak and without pity.

When it was all over, Otto felt the creaking, wooden stage shake as a murder of crows circled above. Suddenly, the ground rose and then sank into a thick, oozing black mud like molasses. Moments later, a formless mass squelched out of the muck and rose like a rearing horse to feed upon the writhing mass of butchered humanity.

It was everywhere and nowhere at once as it slowly picked its way through the carnage, absorbing the darkness, savoring the misery, trailing terrible noises. Shrieks. Cries. Whimpers. Pops. Cracks.

It turned slowly to look at Otto for a long silent moment, then the Druanee trudged away through the thick black sludge, disappearing into the shadows from which it had come. 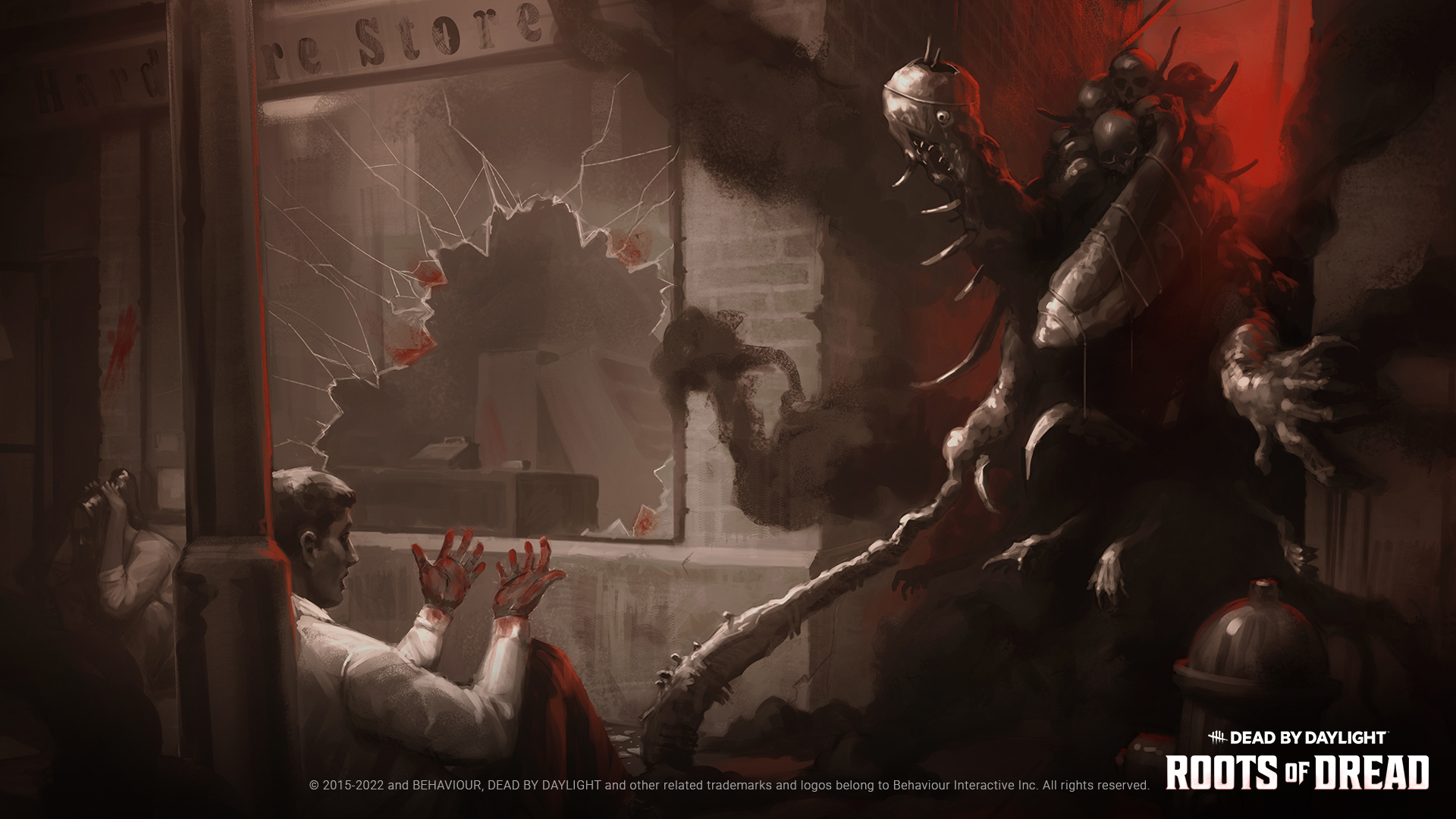 Like a dark thought, the Dredge is difficult to shake. And when night falls, it is nearly impossible.

Press and hold the power button to activate Once activated, The Dredge leaves a Remnant behind. Aim at a locker and press the Ability button to Teleport into it or press the attack button to return to the Remnant. The Remnant is disabled when teleporting to a locker or when a Survivor touches it. While in a locker, aim at any other locker and press the Ability button to Teleport again. Each Teleport consumes a Power Token. Exiting the locker or returning to your Remnant will Activate The Gloaming’s cooldown, after which all Power Tokens are recharged.

Survivors can place locks on lockers to slow The Dredge exiting them. The Dredge can break locks by exiting the locked locker or performing a base attack on the lock. Each locker can only be locked once.

During Nightfall, Survivors must navigate in total darkness, The Dredge’s Teleport is faster with a shorter cooldown, and there is no Terror Radius. Nightfall ends after 60 seconds. Survivors destroying the Remnant also reduces the time of an active Nightfall.

Here’s a look at the new perks coming to the game with The Dredge:

We’ll update this page again with more details once The Dredge is added to the Dead By Daylight PTR.

That’s everything you need to know about The Dredge killer in Dead by Daylight. However, if you’re looking for more Dead By Daylight guides then follow the links below for more helpful tips, tricks and explainers.