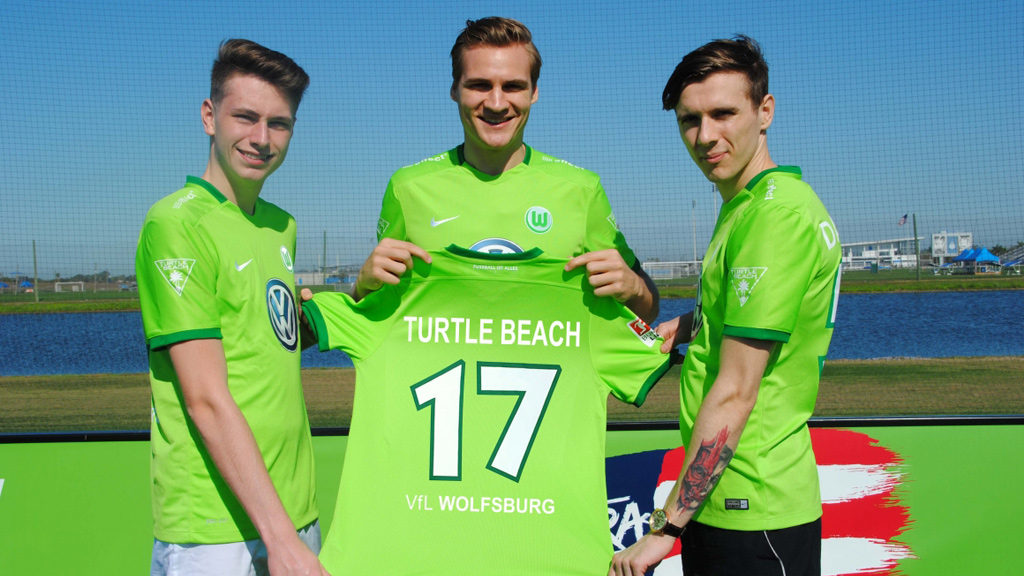 Football – no, not that American Super Bowl thing, real football – is the lifeblood of millions of gamers around the world, and we here at Turtle Beach are extremely excited to announce our partnership with Germany’s VfL Wolfsburg football club!

VfL Wolfsburg was the first major football team to create a FIFA eSports division, so it’s only appropriate that the best club, with the best eSports team, gets the very best audio available.

This partnership will see VfL Wolfsburg’s eSports team donning our incredible ELITE PRO TOURNAMENT GAMING HEADSET, along with other gear and accessories during competitions. There’s nothing quite like having precise audio cues to help give you the edge over the competition, and the ELITE PROs with their 50mm Nanoclear™ technology will be another tool in VfL Wolfsburg’s belt to help them crush their opponents.

Whether it’s on real or digital grass, VfL Wolfsburg is a team that continues to score goals. In the recent Florida Cup, they were able to claim a 2-0 victory and add three points in the FC Challenge standings while VfL E-Sportsman Timo “TimoX” Siep secured second place in the Electronic Sports World Cup at Paris.

Part of the excitement behind Turtle Beach’s partnership with VfL Wolfsburg is the fusion of real and digital football through the introduction of the VfL Wolfsburg Gaming Zone. This new Gaming Zone gives fans the incredible opportunity to play the latest video games while testing out the gear the team uses right after watching a match. Ever wanted to just chill out afterwards, play some games, and test out some sweet audio gear? Well now you can!

So, if you want to see your favorite Bundesliga team, check out the latest and greatest video games, and test out the ELITE PRO headsets that the VfL Wolfsburg eSports team uses, be sure to attend the matches at the Wolfsburg’s Volkswagen Arena.

Turtle Beach will continue to support gamers, whether it’s through partnerships with talented sportsmen like the VfL Wolfsburg football club or through developing FLYTE, the greatest innovation in backpack technology since cavemen learned to stitch animal pelts together. We here at Turtle Beach are excited for what 2017 has to offer, and look forward to sharing more info in the months ahead.