Turn the odds in your favor by crafting the best Elite guns in Far Cry New Dawn. 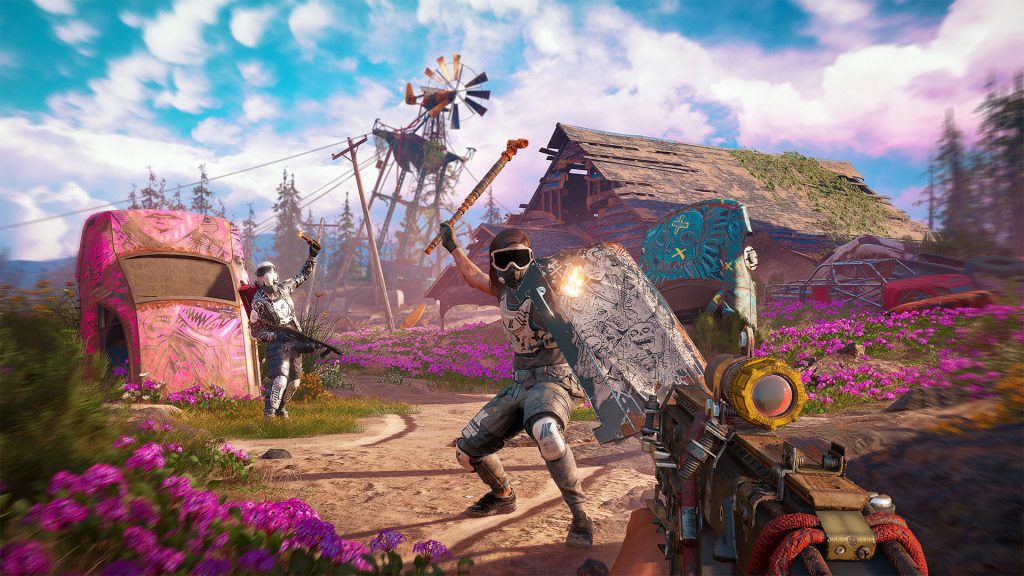 Hope County calls again, except this time things look a bit different. Far Cry New Dawn sees players return to the world they explored back in Far Cry 5, but instead of rolling green fields, a post-apocalyptic wasteland awaits. Surviving these hostile conditions is going to require more than just moxie and smooth talking, you’re going to need guns – the best guns. You’re also going to need to know how to upgrade them. Fear not, because we’ve got you covered! 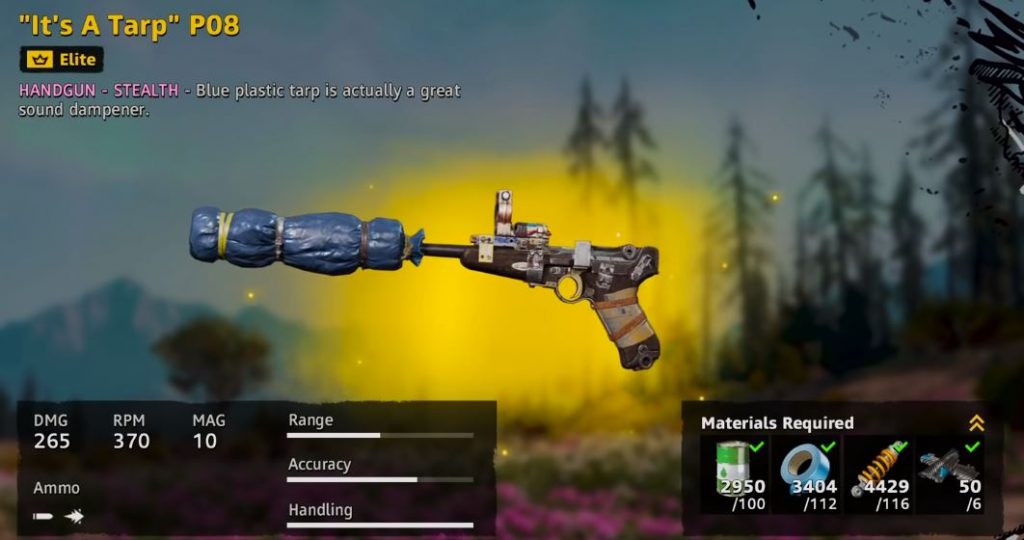 Having a trusty handgun by your side is the first rule to surviving a post-apocalyptic world. It’s A Tarp is a stealthy handgun that will keep you safe and…sound… in many different situations. Because of its silencer, it allows you to get into those outposts without being detected, which should result in some greater rewards. Plus, it’s got a blue tarp wrapped around the muzzle, pretty cool, right? 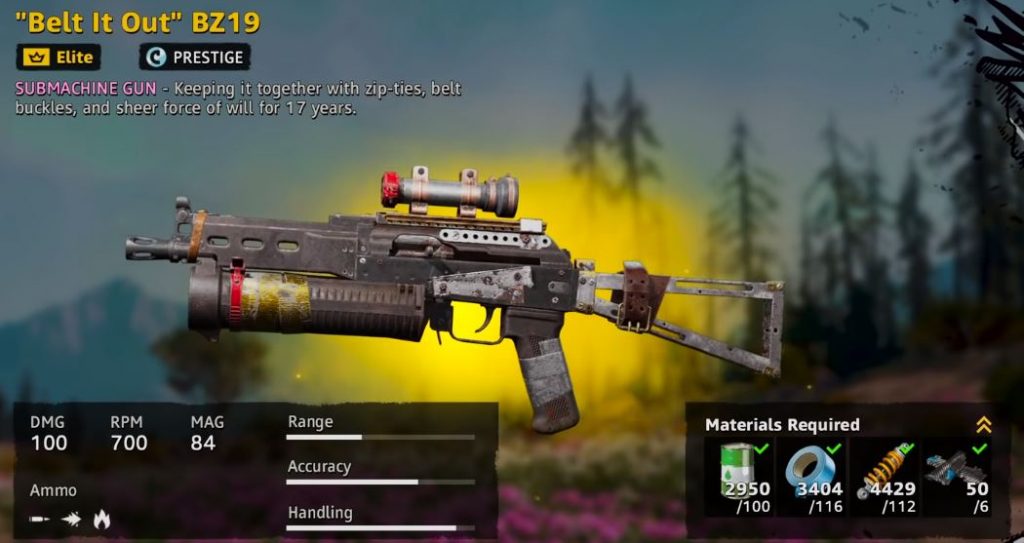 Though it might not be as powerful as an assault rifle, the Belt It Out sub machine gun can still hold its own. This compact SMG has it all, zipties, buckles, and a snazzy scope. It’s not as stealthy as the X-Mas TAPE, but what it lacks in stealth it makes up for in its magazine size. Keep its range limitations in mind, as you won’t be hitting anything if you’re too far away. 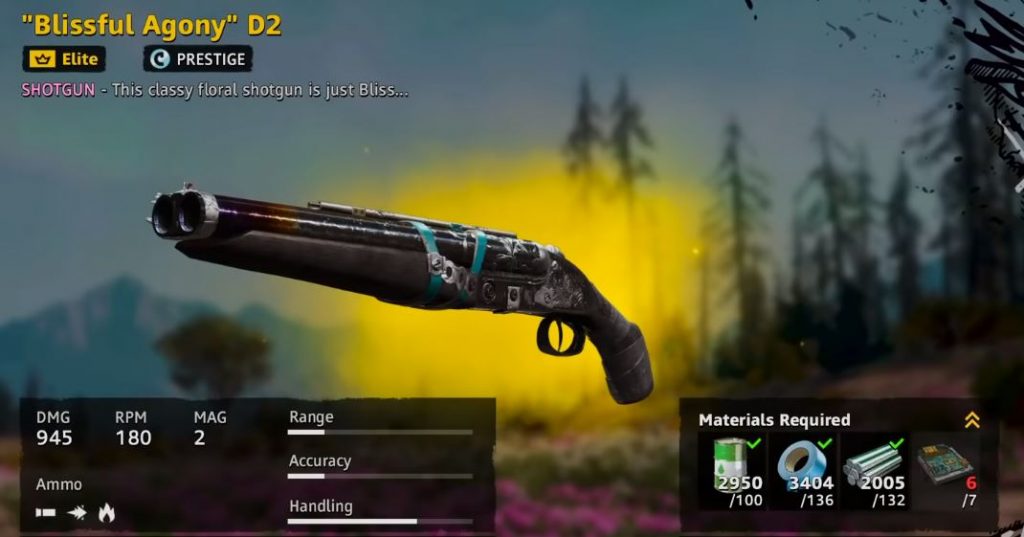 This double-barrel sawed-off shotgun is perfect for those close-range encounters where you need to deal a lot of damage very quickly. While the only difference between the Blissful Agony and the Such a Boar is its design, we think the floral design is the perfect accompaniment to total destruction. What better way to destroy the morale of your enemies than by attacking with a flowery gun? 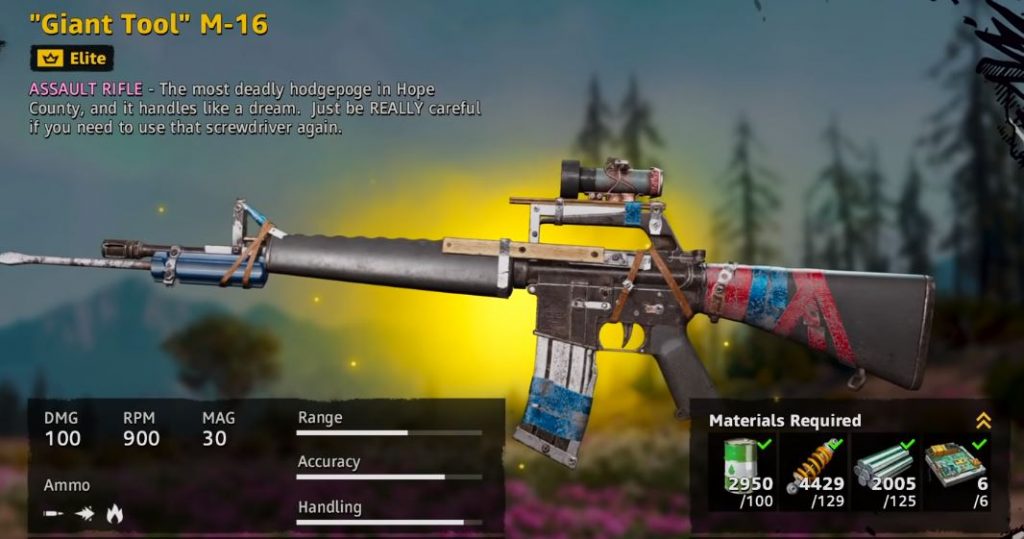 The M16 is such an iconic weapon in video games and it continues to be a fantastic even in the post-apocalyptic world of Far Cry New Dawn. The Giant Tool is an interesting take on the M16. Typically, an M16 is a burst-fire weapon in most games, but in the wasteland of Hope County, this beauty fires in full-auto. Despite the full-auto firing rate, it handles extremely well, and the range is decent to boot. 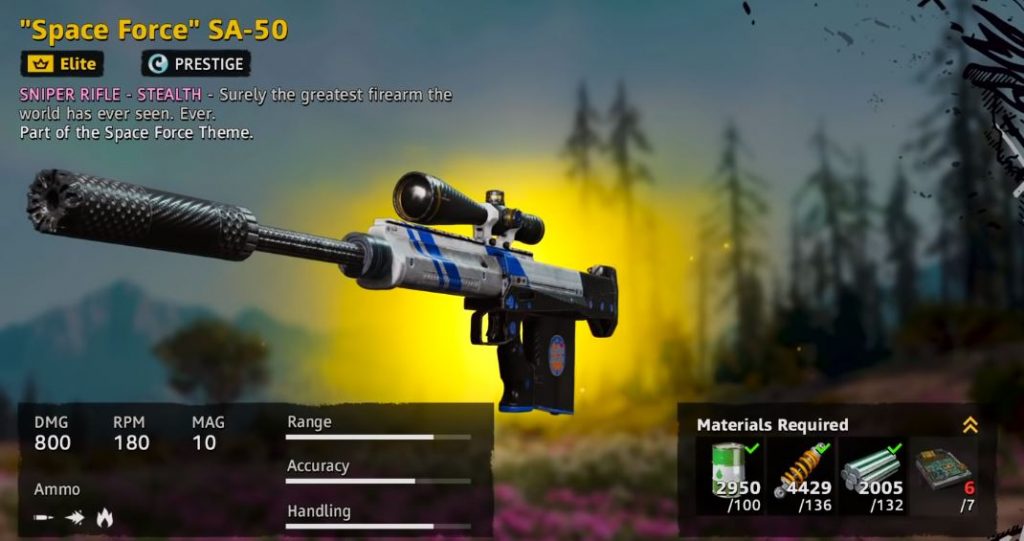 Sniper rifles are always extremely useful in Far Cry games. These long-range weapons allow you to take out entire outposts and enemy patrols without them ever knowing you were there. The Space Force is the same archetype as the Length of Pipe, just with a different paint job. The Space Force does come with a silencer, making it all the more deadly in the right hands. 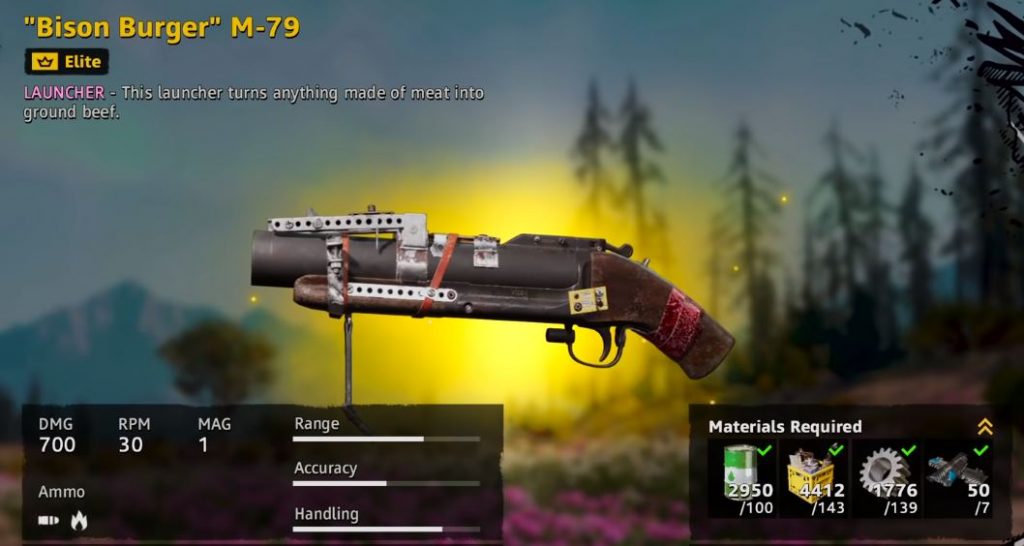 If you’re going to head into battle, you’ll want something that can make mincemeat of your enemies – literally. It’s right there in the Bison Burger’s description: turns anything made of meat into ground beef. This bad boy offers decent range and handling, however, unless upgraded, it’s not going to deal much damage. The Bison Burger is best used to knock enemies away from you or towards other environmental hazards.

Of course, if you want to get your hands on Elite weapons you’ll need to upgrade your weapons bench. To do this requires quite a bit of ethanol. Thankfully, it’s super easy getting your hands on ethanol. The precious liquid is awarded for clearing outposts, can be found in supply drops, and can even be stolen from trucks. If you see something with the word “ETHANOL” scrawled on the side, stop and liberate it from the enemy.

How to Upgrade Weapons

After upgrading the bench and getting some sweet Elite weapons, the next step will be to upgrade them. To update a weapon in Far Cry New Dawn, simply head to a weapon bench and select the weapon you want to upgrade. A few resources and materials will be needed to bump the weapon up to a new damage threshold, but it’s worth it. The further you get into the story, the more heavily-armored troops you’ll likely encounter, and your rusty gun from the start won’t be looking so good!

Picking the right weapon for the job in Far Cry New Dawn is no easy feat, especially early on. All those rusty weapons will only get you so far before you start wondering what else is out there. With so many Elite guns to craft, you’re spoiled for choices! 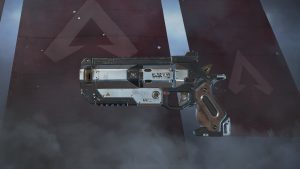