Sea of Thieves is going from strength to strength and now that it’s starting to find its feet through its seasonal content model, we’re starting to get a lot more lore mixed in with the enjoyable gameplay.

With the launch of Season 6 Rare has also looked to introduce a greater evolving narrative, while also giving players more ways to play with Sea Forts and more recently with mysteries. Next up for wannabee pirates is Sea of Thieves Season 7 which should be dropping in the next couple of weeks. Keeping reading for a closer look at when Season 7 starts, as well as an overview of the confirmed features coming in Season 7 as well as a few teasers of what else to expect.

With Season 7 fast approaching we figured this would be a good spot to bring you up to speed on any new developments and leaks, especially those from some of the games community like YouTuber Falcore. So read on, and get up to speed!

Unfortunately Rare have had to postpone the launch of Sea of Thieves Season 7, with the release date pushed back to August 4.

Hi everyone, I just wanted to share an update on the progress of Season Seven with you all. As we revealed during the Xbox & Bethesda Showcase in June, Captaincy is at the heart of Season Seven, and this is an update we are hugely excited about.

We believe Captaincy will transform the experience of playing Sea of Thieves, adding deeper meaning and history to every session and every encounter out on the seas, along with the much-requested ability to own and finally name your ship.

However, with such a fundamental update to the game, there is a lot of hidden work to be done in the background. This is an update that brings in a vast range of new stats to track, and has required a complex partnership across our Game, UI and Services teams to bring it to life.

As we started getting closer to the originally stated release date, it became apparent that things were coming in hotter than we liked and there was a real risk of not delivering to the quality and polish we expect, as well as putting undue pressure across the team to get it all over the line. Subsequently, we have made the decision to shift the release date back slightly to August 4th.

We understand this will be disappointing for those of you who are eagerly awaiting this update, and we appreciate your patience with this change. We know Season Six has been a looooong one, but we are super-excited about Captaincy and we hope you are too. Not too much longer to wait, we promise! We also want to make sure that with Season Seven arriving a little later than planned, you’ll have plenty of time to play through this new Season when it arrives and enjoy levelling up your Renown.

Sea of Thieves Season 7 is coming NEXT WEEK on Thursday July 21!

Stay tuned for all the latest news and server downtime details in the lead up to launch.

A very musical Sea of Thieves trailer was revealed during the Xbox Showcase this weekend. Not only did it confirm that Season 7 is coming on July 21st, 2022, but also plenty of new features. Here’s the full low down from Rare’s blog post:

“Season Seven arrives in July, and with it comes a whole set of Captaincy features that will not only allow you to name your ship and emblazon it on the crest for all to see, but customise the ship’s interior to your heart’s content and earn a whole host of new progression rewards too. Miss the Showcase event? You can watch the trailer right here.”

You'll be able to buy and name a ship from July 21st! #BeMoreCaptain in Sea of Thieves Season Seven. pic.twitter.com/XJHj9yboGI

Will we get our first look at the new season for Sea of Thieves? Here’s hoping.

Sea of Thieves has confirmed that Season 7 has been delayed. Season 7 was set to launch in June 2022, but the timer in-game has been updated to reflect an additional 5 weeks which have been added on. The Rare team has confirmed this change on their Discord server (see below).

Sea of Thieves Season 7 will now launch towards the end of July.

The next Sea of Thieves adventure ‘Lost Sands’ is now live and lasts until June 9. Could that be when Season 7 goes live? And how will this new adventure feed into the next season? Hopefully, we’ll get some more answers soon enough.

Help determine the fate of Golden Sands: the next Sea of Thieves Adventure, 'Lost Sands', is now live! From now until June 9th, side with Merrick and secure vital supplies to help restore the stricken Outpost, or ally with the Servant of the Flame to ensure it remains in ruins… pic.twitter.com/ynUwMqA2MJ

It looks like DeMarco has been killed, with players now able to find his Skeletal remains on Sea Dog’s Rest. We wonder if this is going to be part of a new mystery coming next season?

There’s recently been a few subtle updates to the Sea of Thieves. Thankfully Falcore has tracked them all down, including the boring ones, like the newly updated bookcase. Don’t worry though, it does get better. Now watch!

At the time of writing Rare has not announced an official date for when Sea of Thieves Season 7 starts. Despite this, we do know that Season 7 is “launching June 2022” as confirmed by the Sea of Thieves 2022 roadmap.

In addition, past seasons have typically lasted somewhere between 9 to 14 weeks, so we can probably give a good prediction as to when the season starts. To help, take a look at the table below.

Given that we know Season 7 is starting in “June” we can make a fairly solid guess as to when Season 6 ends and Season 7 starts.

If Sea of Thieves Season 7 was to start on June 2, it would be 12 weeks since the start of Season 6. Likewise, June 9 would be 13 weeks and June 16 would be 14 weeks. So really we’re looking at a launch date for the next season somewhere between June 2 and June 16.

As we’ve noted though, this is just a rough prediction on our part, so take it with a pinch of salt until Rare provides an official announcement.

According to the Sea of Thieves 2022 Roadmap, Season 7 will arrive with the following updates:

UPDATE – The Xbox trailer for Sea of Thieves Season Seven might have distracted you what with it’s musical wizardry, but if you concentrate you can see a bunch of ‘features’ listed on the scroll midway through. Here’s a roundup of what it showed: 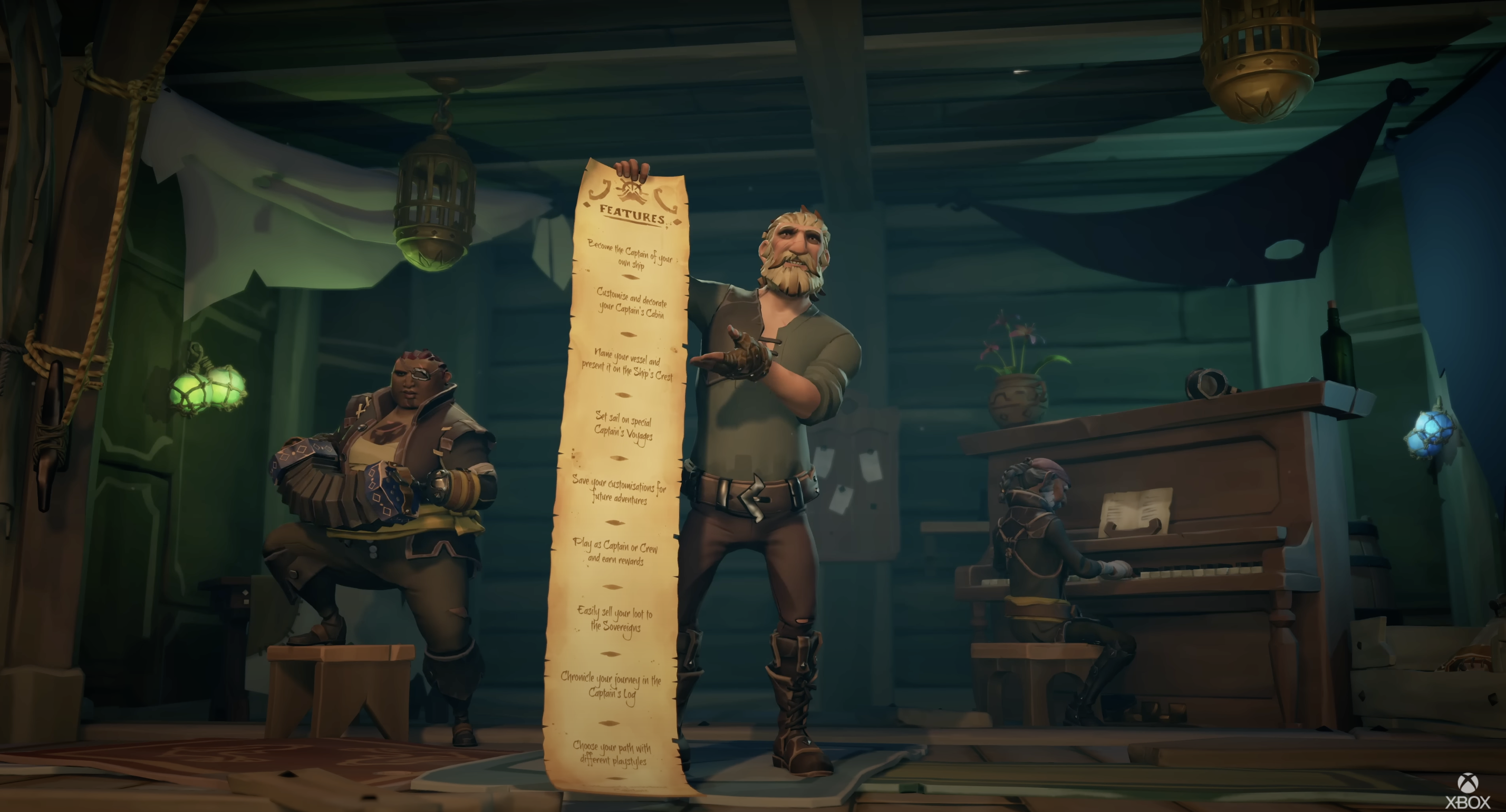 For the time being there’s not been many Season 7 leaks, but we have had plenty of teasers of what to expect.

Thankfully for us, the all-knowing Sea of Thieves YouTuber Captain Falcore has compiled a bunch of the most recent theories and teasers into one handy Season 7 video. You can watch it just below.

The TLDR is that there are several teasers pointing towards a potential new dry dock building, ship nameplates and also a mysterious new area which has been spotted near Arena Tavern.

That’s everything you need to know about Sea of Thieves Season 7 for the time being, but make sure to check back for the latest news, leaks and updates as they become available. 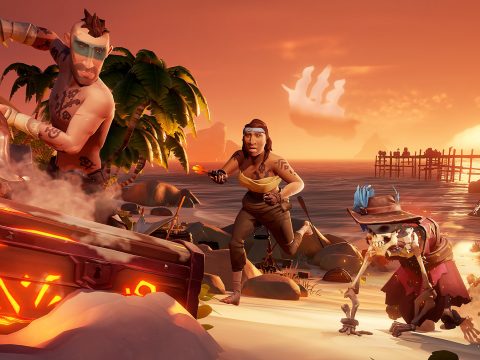