Our Favorite Board Games Adapted From Video Games

Wondering about board game versions of your favorite video games? Here are some of our favorites! 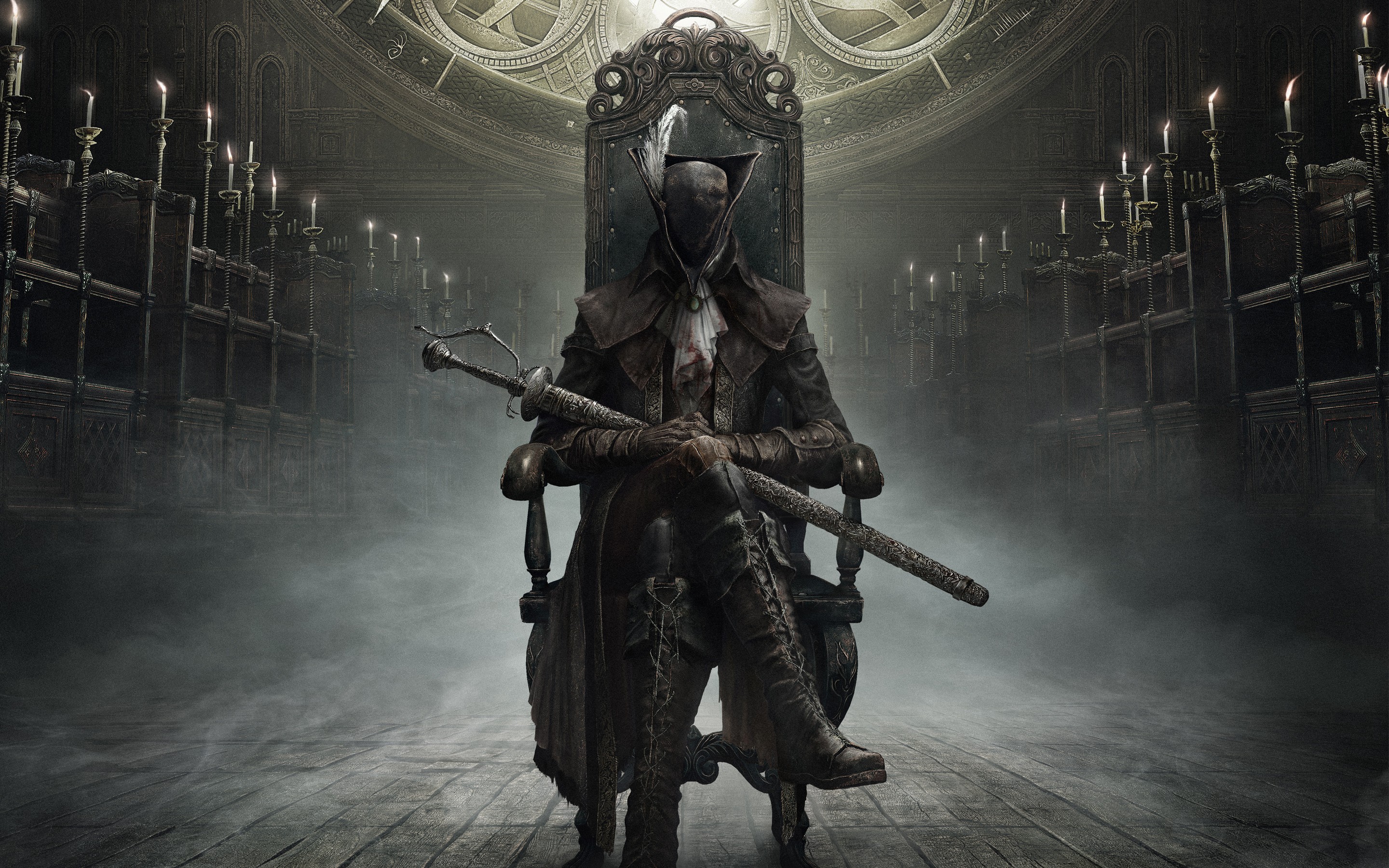 Film and television aren’t the only places where you’ll find creative adaptations of video game properties like Resident Evil and The Witcher. Over the years, board game companies have begun churning out video game adaptations of their own as well.

Think about your favorite video game series. Chances are, it’s already been made into a board game. Dark Souls? Board game. Fallout? Board game. With so many different video game-themed board games to choose from, it can be hard to pick one out based on your interests.

If you’re wondering which ones are worth your time, or are simply curious to learn more about these adaptations, we thought it’d be fun to take a closer look at some of our favorite board games that have been adapted from video games! 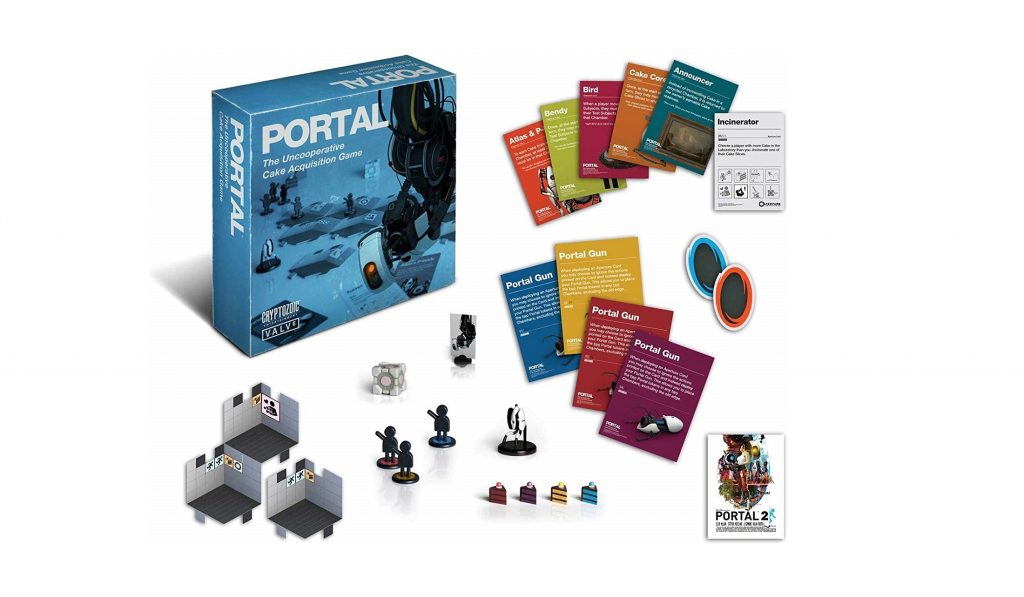 First up, there’s the board game adaptation of Portal, from Cryptozoic Entertainment. Designed by Valve staff, the Portal board game is a must-have for fans of the series. One thing we found interesting about this adaptation is how it acknowledges its roots by including a free Steam code for Portal 2. Even if you already own Portal 2 yourself, you can always give the code away, or hook one of your friends into Portal if they’re not obsessed already. Due to its simplicity, Portal: The Uncooperative Cake Acquisition is both fun and addicting to play.

It’s got a modular board and includes miniatures of Portal characters and items like the Companion Cube. Trust us when we say that the adorable mini Cake slices are most definitely NOT a lie. As its name suggests, the entire game is based around the Cake.

Essentially, you’ll recruit and use Test Subjects to earn Cake. You can also continue to add Test Subjects to your arsenal. The goal is to have more Cake than the other players at the end of the game, and you can do this by eating away at their supply of Test Subjects as you move around the Laboratory (board). We won’t go into too much detail, all we’ll say is that it’s not only one of the best board game adaptations of a video game, it’s also one of the best board games we’ve played period!

DOOM: The Board Game 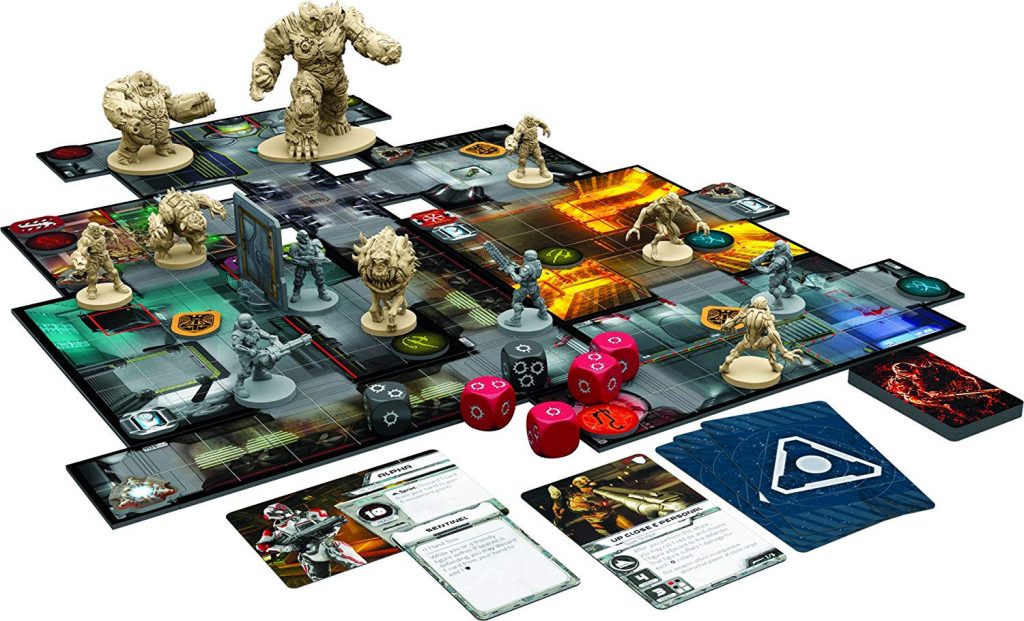 DOOM is one of the most well-known first-person shooters in all of video games, but did you know it also makes for an incredibly fun board game? That’s right, you can actually play a board game version of DOOM and it’s an absolute blast. Featuring asymmetrical gameplay and a fun deck-building element, the DOOM board game makes for an interesting evening with friends to say the least.

You either play as an elite marine for the Union Aerospace Corporation, or as a demon working to take over the place and slice any marines that get in the way. To complement all of the action, there are demon figurines included that almost make it way more satisfying to play the Invader role. You can call upon Imps, or even use a Cyberdemon to body your way to the top.

It can feel similar to other board game adaptations of video games, but is worth it for DOOM fans and anyone looking for something a little “edgier” to play on a game night. 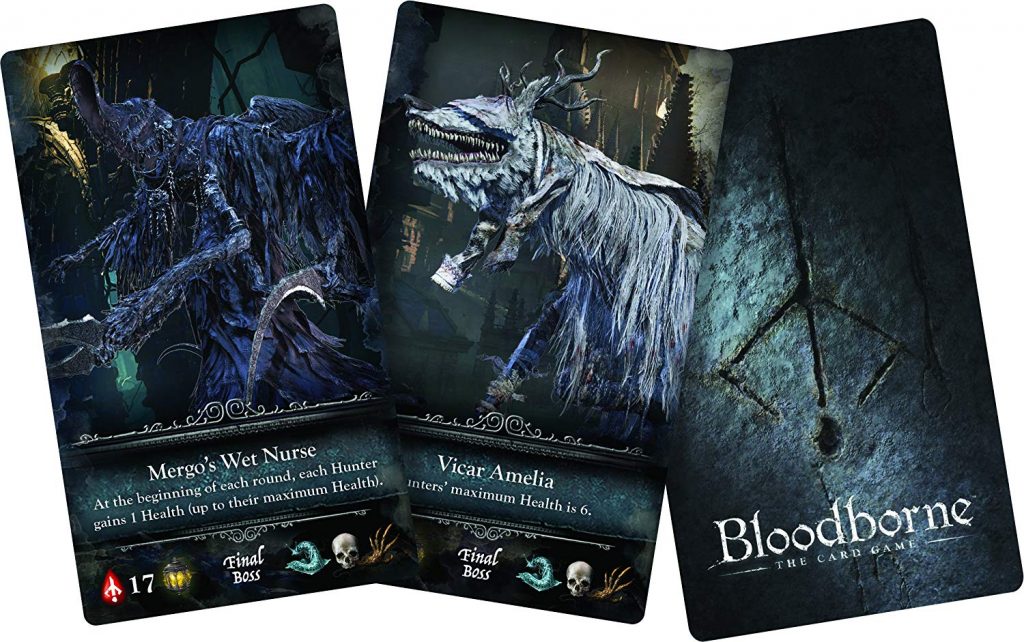 You may have successfully struggled your way through Bloodborne the video game, but have you ever played Bloodborne the card game? For many, the answer is no, to which we’d reply that you absolutely should check it out if you’re a fan of card games, or a fan of Bloodborne in general.

In Bloodborne: The Card Game, you’ll work with other players as a team to clear out the Chalice Dungeon, while also collecting yharnam’s blood. At the end, you’ll face off against the final boss, and the Hunter with the most trophies wins it all.

What’s nice about this card game in particular is your ability to work together and strategize, even as you also hope to beat the other players and prove you are the greatest Hunter of them all. The card designs are also just stunning to look at, all with the same aesthetic found in the video game itself.

For the real hardcore fans of From Software, there’s even a board game adaptation of Dark Souls, though it’s much, much pricier than Bloodborne: The Card Game. Depending on your preferences and your wallet, you could always get both and call it a day!

XCOM: The Board Game 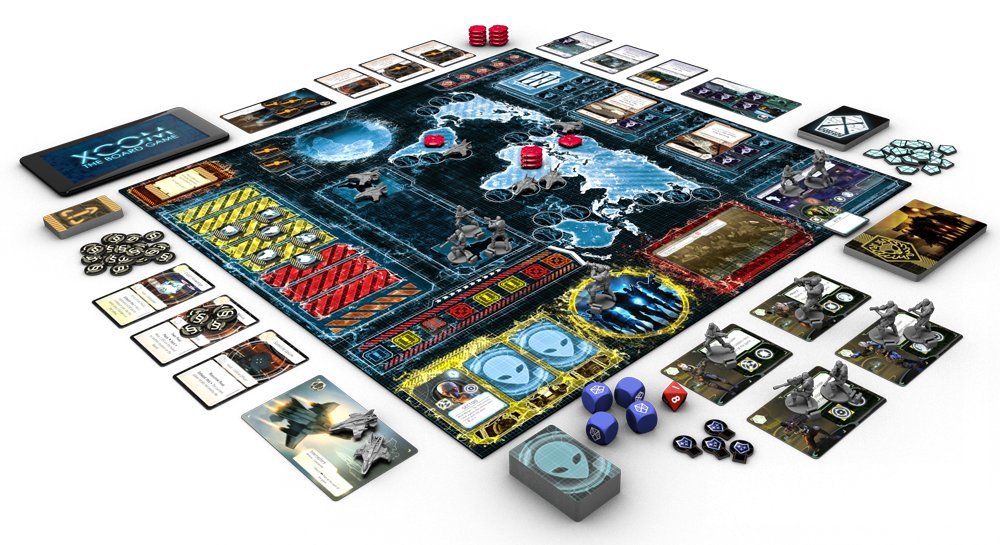 XCOM is a series that has long dominated the turn-based strategy scene, so it makes sense that it’d also make for an amazing strategy board game experience. Similar to the game, you’ll work together with other players as leaders of the XCOM organization. Together, you’ll fight back against the growing alien invasion which, in XCOM: The Board Game, is generated and coordinated by a free companion app. Ah, the beauty of technology! Well, except when it’s alien technology, in which case you’re going to want to destroy it as you work to defend and fortify your base.

The board game brings the feeling of the original IP directly to your tabletop, and offers endless replayability thanks to the randomization of its encounters. The only downside is when you do everything right and still lose, but at the end of the day, that’s XCOM. You’re fighting highly intelligent alien beings, after all. You aren’t guaranteed to win!

Plague, Inc. The Board Game 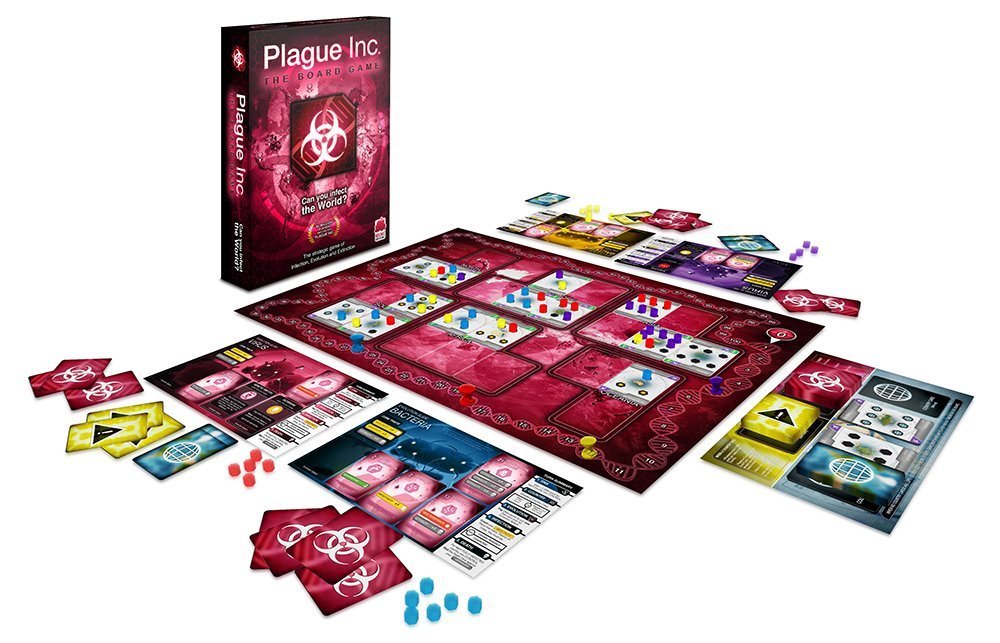 If you’ve ever played Plague, Inc. the video game, you’ll know that your main goal is to create a virus powerful enough to destroy the world. The concept is the same in Plague, Inc. The Board Game, though in some ways it can feel more fun thanks to the element of physical interaction. You’re free to name your virus anything you like and using that virus, you’ll work to infect your first country as Patient Zero. As you place your tokens in cities of your choosing, you’ll earn DNA points, though you’ll also have to contend with the viruses of other players.

To ensure your virus is the strongest, you’re going to want to add new symptoms and fortify it, while also anticipating the world’s response and attempt at control. What’s nice about Plague, Inc. The Board Game in comparison to other games on this list is how simple it is to pick up and play. If you’ve already played Plague, Inc. before, you may have a slight advantage, but you’ll be surprised at how quickly your fellow players get the hang of things. Although, there are downsides to this of course, like getting owned by your parents in a game they’re likely playing for the very first time. 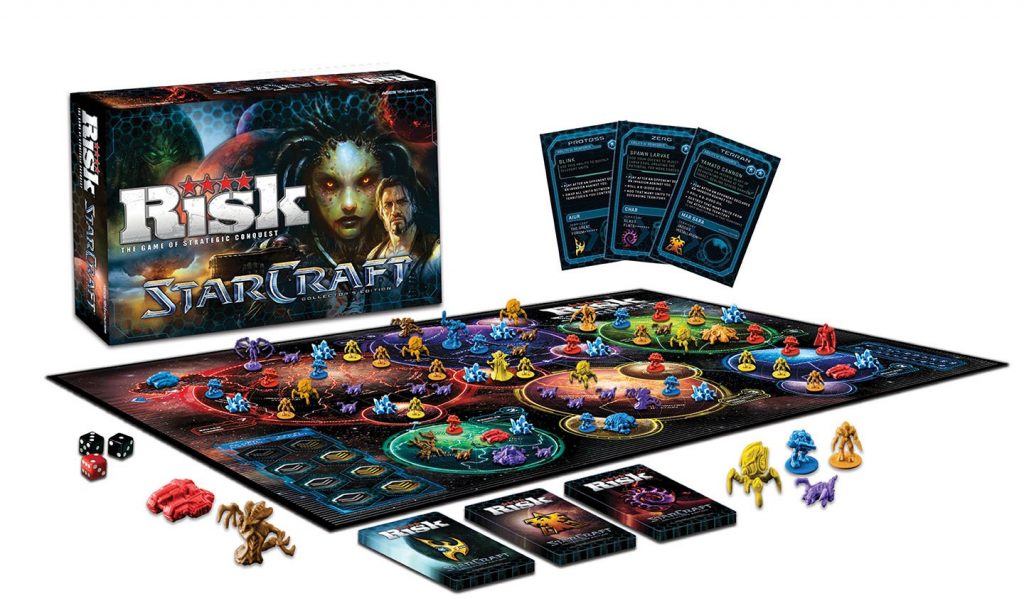 Last, but certainly not least, we have the StarCraft Collector’s Edition of Risk. While this one isn’t a new game as it’s based around the established game of Risk, it’s notable in how it combines Risk with concepts unique to StarCraft.

In RISK: StarCraft Collector’s Edition, 2-6 players will control the three StarCraft factions (Terran, Protoss, Zerg) and fight for control over the Koprulu Sector and to stay alive. Included are custom game pieces with designs based around StarCraft, along with a unique game board featuring the planets of the StarCraft universe.

Those who’ve played it remark that it’s more thoughtful – and even more fun in some ways – than the classic version of Risk.  There are a lot of elements at play in the game from faction Heroes to Mineral Fields and Command Centers. If you can manage everything perfectly and out-think your fellow players, you win it all. If you love StarCraft, or love Risk and want a different take on the original game, we can’t recommend RISK: StarCraft Collector’s Edition enough.