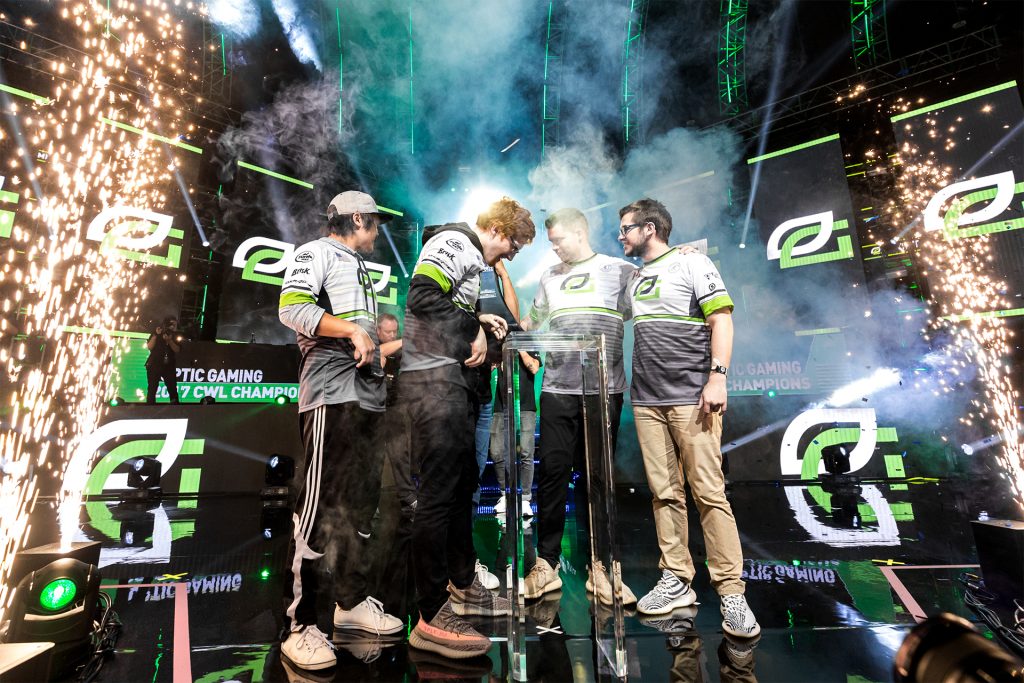 The Call of Duty World League Championships have wrapped, with teams from all around the world battling for their spot as the undisputed COD champs. Among the top caliber competitors were #TeamTB members OpTic Gaming, Splyce, Lethal Gaming and Supremacy.

OpTic Gaming blasted out the gates with a resounding win against Mindfreak Black. In the first game of Hardpoint, OpTic took the lead 250-148, while in Search and Destroy OpTic displayed why they’re considered one of the best and secured a 6-0 victory. This left Mindfreak Black going into the last game 2-0, and unfortunately, facing one of the best squads in the world was too much. OpTic walked away with a clean 3-0 sweep.

Over in Splyce’s camp, the team took on Enigma6, one of the hottest teams in Infinite Warfare, and a team that OpTic have had some trouble facing in the past. This was all white noise for Splyce though, as they managed to sweep E6 down in to the Loser’s Bracket after three close matches.

That’s how you make a statement to kick off a championship bracket run. We take it 3-0 over @Enigma6Group. #OnTheHunt #CWLChamps pic.twitter.com/10QfHM3RLL

Retaliation Uplink started off the Splyce versus Enigma6 battle, with Splyce cinching the win 250-217 after Engima6 tried to pull ahead. S&D on Crusher followed, with another close match for Splyce, but they walked away with a 6-4 win, putting E6 in a similar position to MF Black. Wrapping up the series would be a match of Uplink, and try as they might, Enigma6 couldn’t push back against Splyce, as our boys won 7-4. This left Splyce in an impressive 3-0 position and heading into a match-up against OpTic Gaming.

The tension in the Amway Center was high as both teams, who had just gone 3-0 in previous matchups, squared off against one another. What followed was one of the most memorable battles during the Call of Duty World League Championship.

The first match was Hardpoint, which OpTic managed to snag thanks to FormaL, despite Zer0 throwing everything he had at the match. This had OpTic in the lead 1-0 going into a game of Search and Destroy. Splyce wasn’t going to give up easily, taking the game 6-3, tying the matchup 1-1.

That FTL was FILTHY @jurd!

Uplink followed, with Splyce taking a victory and bringing the tally to 2-1 in Splyce’s favor, but it was OpTic Gaming who came back in another round of Hardpoint, pushing the series into Map 5. As the round of Search and Destroy loaded on Throwback, each team was sitting pretty with 2 wins, making this the decider.

Though they fought hard, Splyce would fall to the power of OpTic Gaming, but not without a fight. The two teams fought back and forth, with OpTic eventually securing the win 6-4. This plunged Splyce into the Loser’s Bracket where they would fight Epsilon.

WHAT A SERIES. GGWP to both squads! @OpTicGaming continue their winners bracket run while @Splyce will battle on in the LB. #WeAreElite pic.twitter.com/1zQ1jwigoF

Breakout Hardpoint was first, and despite an early lead by Luminosity, Splyce fought back tooth and nail, but it wasn’t enough. This followed through Search and Destroy as well as Uplink, with Luminosity taking the cake 3-0. Well done to Splyce for fighting to the very end!

A 0-3 loss to @Luminosity eliminates us from #CWLChamps.

2017 is an amazing year for Splyce Call of Duty. Our hunt doesn’t stop here. pic.twitter.com/94EZCH9IDD

This brought Luminosity back out of the Loser’s Bracket to face off against OpTic Gaming, but the Green Wall did what it does best and completely blocked any further advancement, knocking their enemy away with a sweep of 3-0.

OpTic Gaming marched on to face FaZe Clan and, yet again, showed why they are the crowd favorite and a force to be reckoned with. On Hardpoint, OpTic put FaZe in the under-100-point club, claiming a crushing 250-82 victory. The following match was Search and Destroy, and much to the chagrin of FazE, OpTic played near perfectly for the clean 6-0. The following match was Uplink, where FaZe started to bite, but it was nothing OpTic hadn’t seen before, as they retaliated and secured the victory, bringing their win 3-0.

.@OpTicGaming have secured their spot on Championship Sunday! #GreenWall #WeAreElite

This slight dip into the Loser’s Bracket meant that, going into the Grand Finale, OpTic Gaming would need to win two matches in a row, against the very team that just kicked them down into the dirt: Team EnVyUs. It was time for #eClassico again.

The time has come. OUR TIME HAS COME. pic.twitter.com/N3RKzYTNS2

Just when EnVyUs thought they got rid of OpTic, the Green Wall springs back up and then it was off to the races with both teams. The first match was Hardpoint, with OpTic barely breaking a sweat as they finished 250-117.

Search and Destroy belonged to EnVy, bringing the match 1-1. Uplink was next, and much to the surprise of everyone in attendance (both online and in-person), OpTic beat down EnVy at Uplink, being the first team to do so all weekend. Hardpoint followed, and much to the dismay of Team EnVyUs, OpTic Gaming reset the bracket with a close 250-204.

Clearly rattled at this reset, Team EnVyUs entered Hardpoint on shaky knees. OpTic capitalized on their momentum and crushed 250-171. Another match of Search and Destroy, and a performance unrivalled at the Call of Duty World Championships, as EnVyUs found their feet and OpTic refused to budge. The back and forth was spectacular, and the roar of the crowd was unmatched. In the end, OpTic claimed the victory and headed into what could be the final map.

Uplink followed, and judging by Team EnVyUs’ performance over the weekend, it could very well be theirs for the taking. OpTic wasn’t having a bar of it as they kicked it up a notch, landing dunks, throws, and an unbelievable intercept. OpTic Gaming sealed the deal with a final dunk, winning the match, winning the reset Bracket, and securing the title! Congratulations to OpTic Gaming for earning the title of Call of Duty World Champions as well as a hefty $600,000!

Thank you for being a part of our journey. pic.twitter.com/pJHeJgjCPW