Change can be a real struggle, hey? While Jin Sakai is learning how to bend the rules he’s spent a lifetime with as a Samurai, some of us are just trying to swing a sword about without stabbing ourselves. Ghost of Tsushima’s combat can prove pretty punishing at first, as even weak enemies are capable of downing you in just a few hits. To help those of you just setting foot on the island keep your necks intact, we’ve put together a quick list of combat tips for Ghost of Tsushima that’ll give your blade the edge over your Mongol foes. 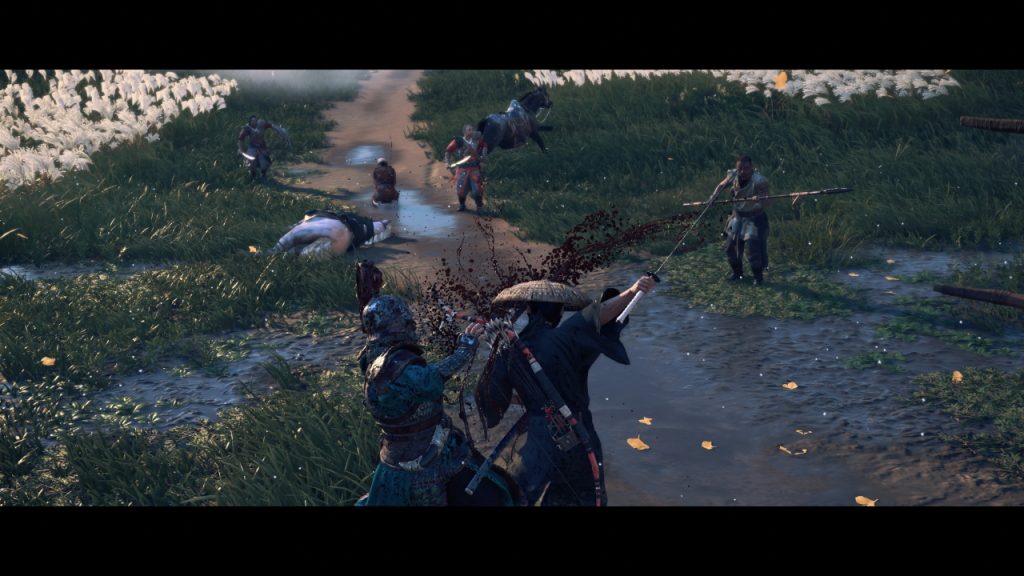 It may seem like an odd first combat tip, but Jin’s toolset starts off pretty basic in Ghost of Tsushima. The first few story missions (marked by golden icons on the map) are essentially tutorials and will equip you with several tools to make fighting that much easier. You’ll also gain major Legend increases, unlocking powerful Ghost Weapons (more on those later). We recommend plowing through the story at least until you unlock the bow, as that’ll come in handy for both starting and ending many fights.

Take out the archers first 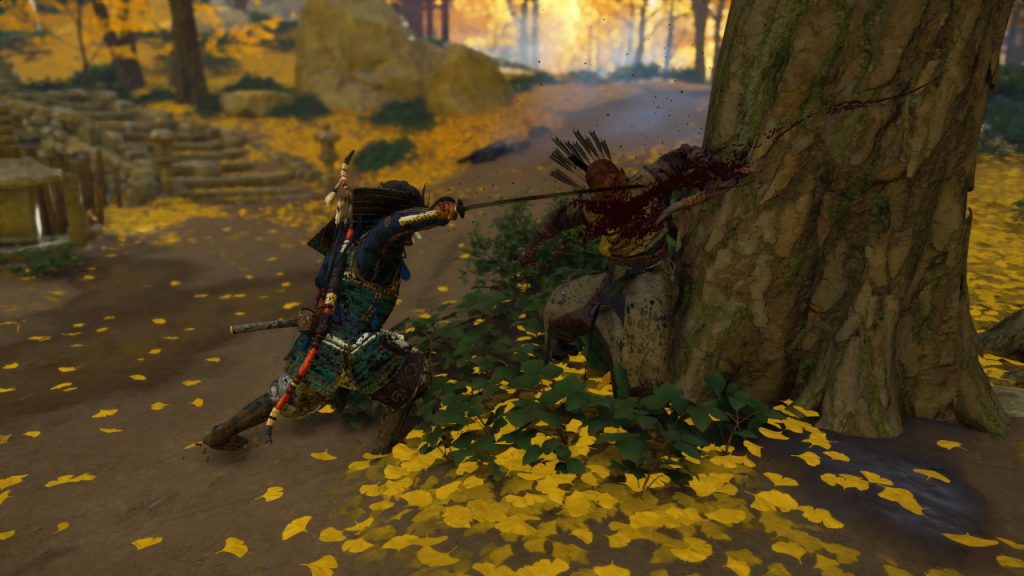 Speaking of bows, enemy archers are lethal shots in Ghost of Tsushima, capable of hitting Jin mid-sprint. You can spam the dodge button (circle) to make sure they miss, but listening out for their calls while you’re fighting another foe can be really tricky. If possible, it pays to sprint away from melee enemies and attack archers early instead. They go down in just a couple of swings, making them easy prey for a nimble samurai.

Jin is a trained samurai at the start of your journey, but as you take down Mongol Leaders, you’ll unlock new stances designed for use against different enemy types. If you’re having trouble with shielded enemies, you should try to complete some Mongol encampments (or story missions) in order to unlock the Water Stance. This specializes in breaking the defense of shielded foes, making it incredibly useful. 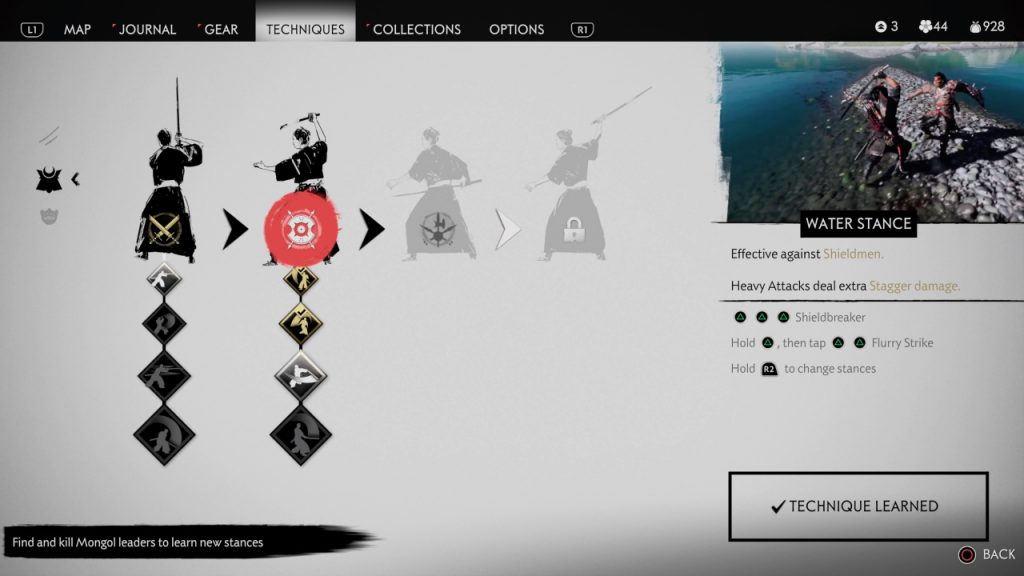 Once you have multiple stances, don’t forget to swap between them as you take on different enemies during a fight. You can swap Stance by holding R2 and pressing the corresponding button shown in the bottom right of the screen. You can also earn extra points towards new Stances by observing Mongol Leaders first. To do this you need to sneak through the camp and find the leader. Watching them from somewhere nearby, you’ll be prompted to press R2 to study them, gaining a bonus point towards a new stance.

It’s all about the parry

Similar to Sekiro: Shadows Die Twice (but a whole lot easier), the sword combat in Ghost of Tsushima is built largely around the parry system. You’ll want to practice tapping L1 to parry just as your opponent strikes, because doing so will usually let you hit back with a couple of cuts of your own. Unlock the Perfect Parry and if you time it just right, you’ll be rewarded with a moment of slow motion, and an opening to tap Square or Triangle to dish out a powerful return strike. There’s little advice we can give regarding parrying besides suggesting you practice a lot, but you can make it a more powerful tool in your arsenal…

Upgrade your parry as soon as you can 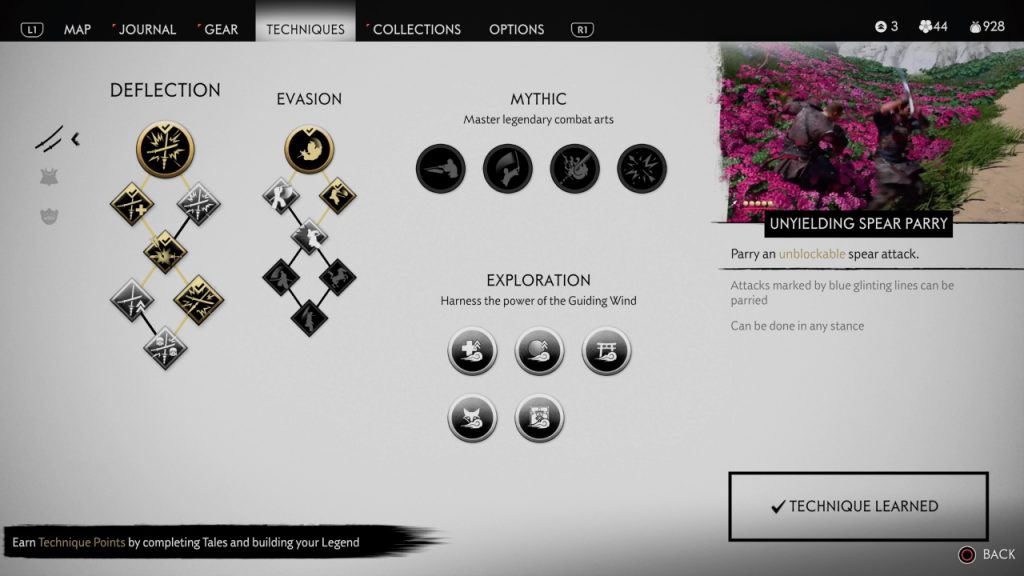 There are a few features in Ghost of Tsushima that aren’t explained all too well early on, one of which being that enemy attacks marked by a red tint are entirely unblockable. Or at least they are until you obtain a few upgrades for Jin. Putting a few Technique Points into the Deflection path on Jin’s Samurai page will allow you to parry unblockable attacks from both swords and spears. This will make your life infinitely easier during hectic battles, as tapping L1 will allow Jin to block these deadly strikes and hit back at his enemy.

Walking brazenly to the gates of a Mongol stronghold and throwing down a challenge to their best fighter feels incredibly cool. However, if you want to live life solely as a samurai, then you’ll need to back it up with some seriously impressive swordsmanship skills. Taking on an entire army in a duel of swords isn’t meant to be easy, which is exactly why Jin develops the way of the Ghost. 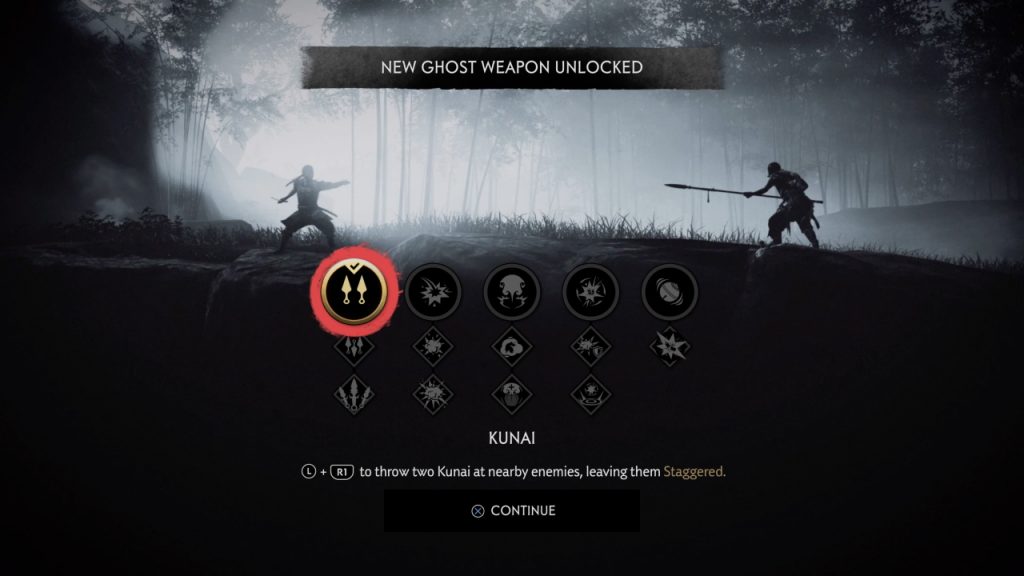 Starting with the Kunai, you’ll unlock Ghost Weapons as you increase your Legend status. Each acts as a powerful tool on the battlefield, capable of evening the odds when you’re outnumbered. Kunai can be thrown with L1 and the analog stick to stun or kill groups of enemies. They’ll stagger even heavy, shielded enemies, opening them up for several attack with minimal effort.

Of the remaining abilities (Black Powder Bomb, Smoke Bomb, Sticky Bomb, Wind Chime) we recommend grabbing the Smoke Bombs first. Toss these down in the midst of a fight to either run away or surprise enemies with assassinations. Once the skill is upgraded, you can even chain assassinations to wipe out several enemies at once.

The armor you wear matters 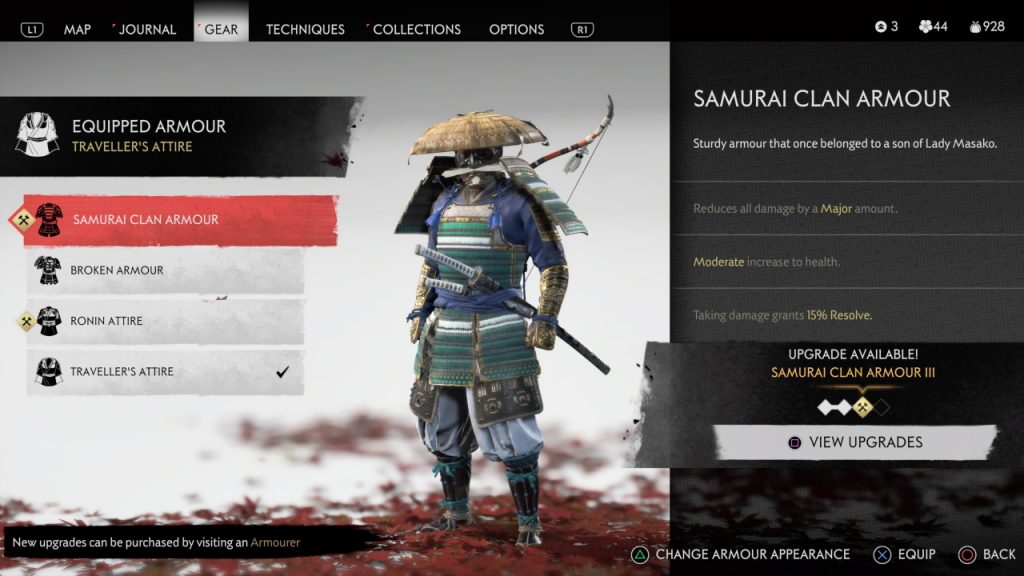 We all have a favourite look, but in Ghost of Tsushima, the armor you equip can have a large impact on your combat prowess. The Samurai Clan Armor will reduce the damage you take and boost your health and Resolve gain, while the Ronin Attire will increase your Melee damage and reduce detection speed. Depending on the fight you’re planning to take, make sure you’re dressed appropriately.

Finally, while not a direct combat tip itself, it’ll make your fights so much easier if you spend a bit of time exploring between each bout. Shrines will offer charms that can boost damage or defence, Bamboo Strikes increase your resolve, and Hot Springs will boost your maximum health. Finally, spend time sucking up Iron, Linen and other resources from your environment and you’ll be able to upgrade your swords and your armor, making you an even more formidable opponent.

The tips above will set your budding samurai skills on the path to mastery, but you’ll need to put in the practice to really see your talents flourish.