It's time to get excited because Call of Duty: Black Ops 4 is coming this year, and we've got a wishlist of things we want included in the game!

Do you hear that? It’s the sound of millions of gamers cheering as Call of Duty: Black Ops 4 was officially announced! Activision dropped the proverbial bombshell when they released the first teaser trailer for what is likely going to be one of the most popular games this year, that’s right, it’s launching October 12, 2018. In the spirit of all things Blops, let’s talk about our wishlist for Call of Duty: Black Ops 4.

Call of Duty: WW2 offered something never before included in a Call of Duty title: a social space where players could hang out, tinker with loadouts, and flaunt their loot crates. After experiencing this new feature in a Call of Duty game, we think it needs to become a staple for the series.

Walking around headquarters, looking at other players and checking out their setup, offers a little break between the nonstop action of multiplayer and the campaign. Being able to spectate people in a 1-on-1, speak with the quartermaster, check your stats, and collect new bounties would fit right at home in the world Call of Duty: Black Ops 4. In the event the game is set during the Cold War, a setting such as a Vietnam forest would be an incredible place to house a social hub.

It seems like the days of experiencing a storyline with a group of friends is slowly fading away. Some of our fondest memories are getting together with three other friends, whether it’s on a couch or online, to play through an entire campaign together – not swapping the controller around, but actually everyone playing at once. It’s a feat that the previous Black Ops titles managed to achieve, so it only makes sense for it to be included in this latest entry into the series. 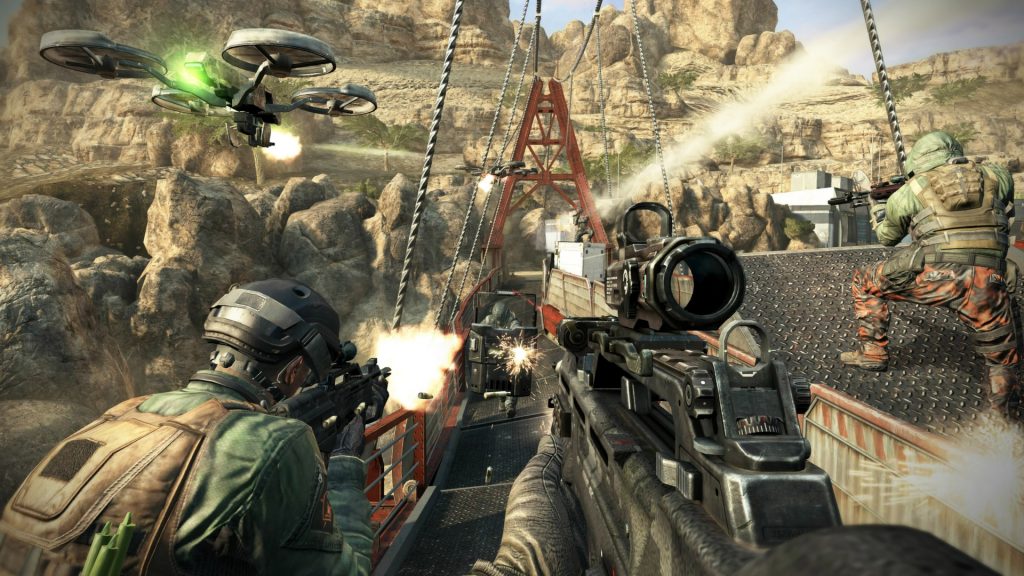 Though Call of Duty: WW2 has been a massive hit, the only modes that feature cooperative gameplay are the zombie and multiplayer segments. We’ve had a blast teaming up with friends for this, but we’d love to be able to share a campaign with them as well.

Speaking of campaign, the story in Call of Duty: Black Ops 4 needs to be phenomenal. Call of Duty: Black Ops has always offered a deeply engrossing story, whether it’s fighting through the Cold War of the ‘60s or jumping forward in time to the Second Cold War. In saying this, some of the best stories were included in the first two Black Ops titles, so perhaps revisiting this era – or even another major conflict of our past – would be a good idea. The story in Call of Duty: WW2 was outstanding, so there is an excellent foundation to build on and a long history of war to draw from for inspiration.

Each of the Black Ops titles has created a story that not only engages us from a narrative standpoint, but also blows us away with its audio design. There’s nothing quite like running through the streets, gunning down baddies while wearing a pair of Stealth 700s. The PlayStation version offers DTS Headphone:X 7.1 surround sound and Bluetooth connectivity, so you’re not tied to your console. We can’t wait to see what Treyarch delivers with Black Ops 4 storyline.

The last Call of Duty title to grace a Nintendo product was Call of Duty: Ghosts on the WiiU, so it’s high time Activision’s flagship shooter makes another appearance. The Switch has gone from strengths to strengths with the likes of DOOM and Skyrim being ported to the console, and after seeing them up and running, we’re keeping a close eye on Activision’s next move.

As the Nintendo Switch and its online component continue to evolve, an online-heavy franchise like Call of Duty could do very well on the hybrid device. Whether you’re traveling or just visiting a friend’s place, being able to take Call of Duty: Black Ops 4 with you without lugging around a bulky console, PC, and the necessary cables, would let players get into the action sooner.

It just would not be a Call of Duty game without the incredibly addictive zombie mode. Zombies have been kicking around in Call of Duty since World at War was released back in 2008, and ten years later, it’s still going strong. In fact, we’ve been thoroughly enjoying the latest content drop and even have a few tips on surviving The Darkest Shore. With the release of Call of Duty: Black Ops 4, we’d love to see Treyarch take another stab at the iconic zombie mode, perhaps mix it up and surprise long-time zombie fans with a new take on the game mode.