How to Beat the Valkyrie Queen in God of War

Stop letting Sigrun the Valkyrie Queen make Kratos look like a chump, take action and learn the best strategy to take her down!

God of War has totally dominated our game time over the past two weeks, and while the fight through the campaign had its difficulty spikes, Sigrun the Valkyrie Queen really put us through our paces. The Valkyrie Queen is fast, fierce, and without a doubt the most challenging boss fight in the entire game. Beating the Valkyrie Queen is going to require a lot of effort, a bit of grinding, and some knowledge of her moveset. For those not yet up to the Valkyrie Queen, check out our beginner tips for God of War to help get you started!

How to Beat Valkyrie Queen

After freeing all the Valkyries from their mortal forms and placing all their helms at the Council of Valkyries, Sigrun the Valkyrie Queen will be the final test. Before you even think about touching the realm tear and summoning forth Sigrun, there are a few things worth doing first. 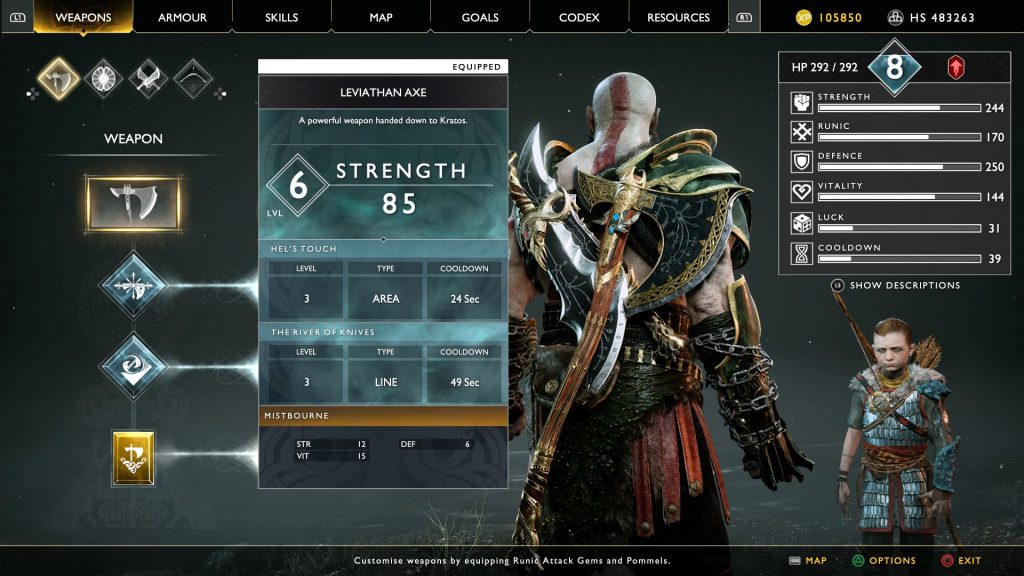 Because she is such a fierce warrior, Kratos and Atreus can’t just waltz in wearing whatever armor they want, they’ll get annihilated. Equipping the best possible gear is the first step in successfully defeating the queen. Ideally, Kratos should be level 8 and perhaps even level 9 if all of the side quests have been completed and the Shattered Gauntlet of Ages has been upgraded with the dragon tears.

Being level 8 ensures that the Valkyrie Queen’s health bar isn’t purple, signifying she is too strong. The higher Kratos’ level, the more damage he will be able to deal and the less damage he’ll take from Sigrun’s attacks.

The best set of armor to use is a fully upgraded set of Ivaldi armor, which is easily earned by completing the Niflheim labyrinth for mist echoes. This is the highest level armor in God of War, offering one of the best perks in the game: constant health regeneration. With Ivaldi armor upgraded, each piece of armor will be able to house three enchantments, and all of these should be epic, high level enchantments. However, a level 6 enchantment that boosts all of Kratos’ stats is going to be better than a level 7 enchantment that gives Kratos a boost of defence when his health drops to critical levels. The reason for this is that if Kratos’ health drops to a critical level, you’re already in trouble, so it’s better to opt for something that will increase your power throughout the entire fight. 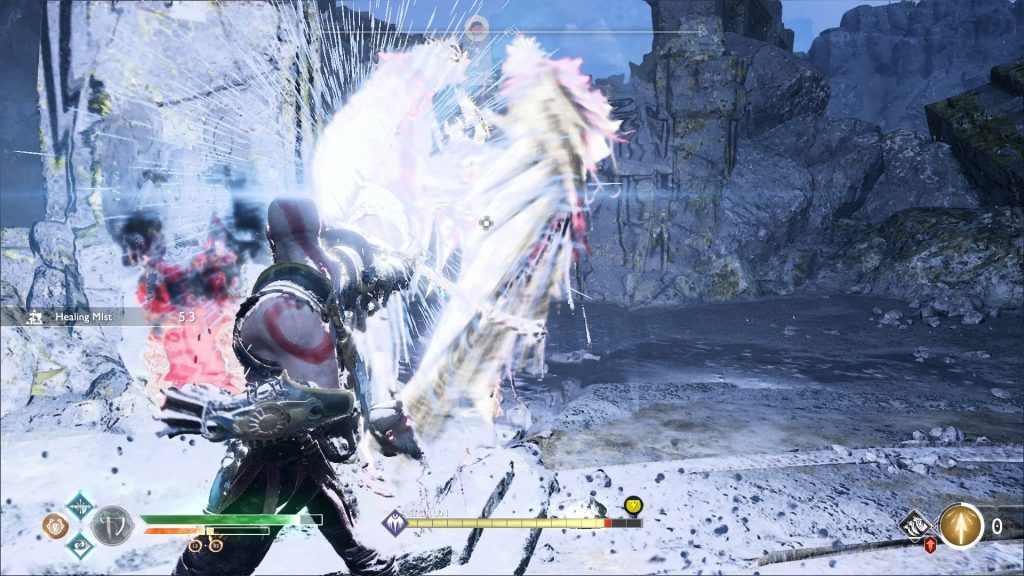 As for the actual skills worth using during the fight, it can come down to personal preference. We opted for Hel’s Touch and The River of Knives for the Leviathan axe, Rampage of the Furies and Hyperion Slam for the Blades of Chaos, and Wrath of the Wolf for Atreus’ runic summon. These skills give a nice coverage of damage and stun. There are skills that deal more damage but they lack any stun functionality, and stunning the Valkyrie Queen or just pushing her away, is a key part of the fight.

In terms of the talisman, it doesn’t really matter too much, so long as it doesn’t drop Kratos’ level below 8. The Shattered Gauntlet of Ages offers a nice burst of damage, and every little bit counts. Another item to consider bringing is a resurrection stone, because there is nothing more frustrating than getting the Valkyrie Queen close to death and then suddenly dying and not being able to continue the fight.

Now that Kratos and Atreus are ready for the fight, it’s time to actually get to the Council of Valkyries and touch the realm tear. Sigrun the Valkyrie Queen uses almost every single one of the previous Valkyrie’s abilities. This means she will slam her weapon into the ground and blast light everywhere, perform three barrel rolls trying to grab Kratos, rain down fire from the sky, and even fly up into the air while screaming “Valhalla” to try and pounce on Kratos’ head. 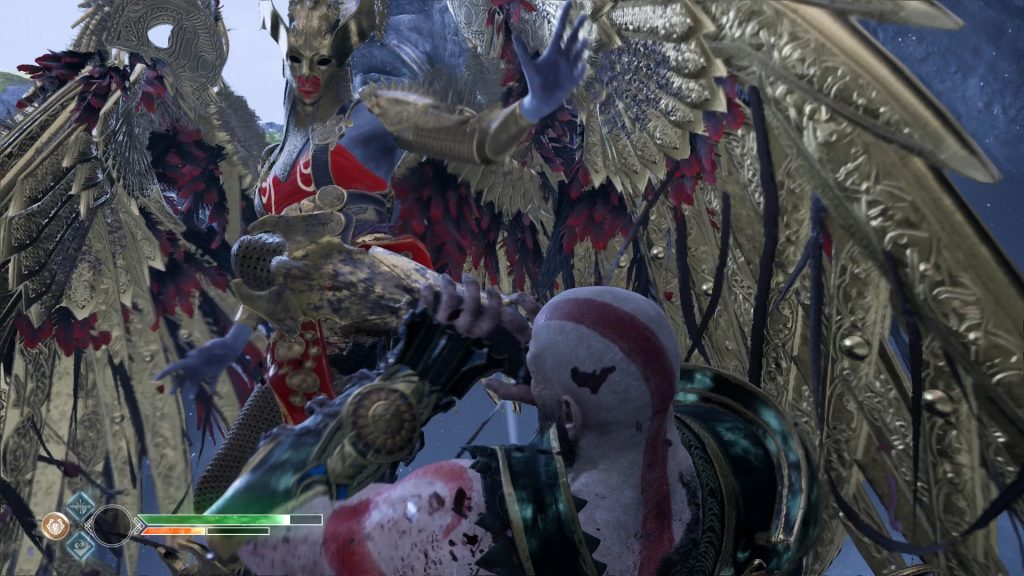 This last move is absolutely critical to avoid, even if you can’t see it begin, which is why a headset like the Stealth 700 for PS4 can be so useful. It allows you to hear the sound of Sigrun launching off the ground, giving you the information necessary to quickly roll out of the way. Even if you’re not facing her, the DTS Headphone:X surround sound will ensure you hear where she is in relation to Kratos and what move she is queuing up next.

When first starting the fight, get into a safe position where all the runic attacks can be blasted in quick succession. Starting out the fight by firing off all five attacks – while also mashing Square to get Atreus to shoot arrows and laying into her with the Leviathan axe – allows Kratos to quickly smack off a large chunk of health. From here, whenever a runic attack goes off cooldown, use it. The only exception to this is Hel’s Touch, an ability which can knock the Valkyrie Queen out of her cacoon-like wing shield. It can also be worth holding onto this light runic attack to interrupt some of her abilities. But if you need a quick burst of damage, don’t be afraid to use it has a fast cooldown. 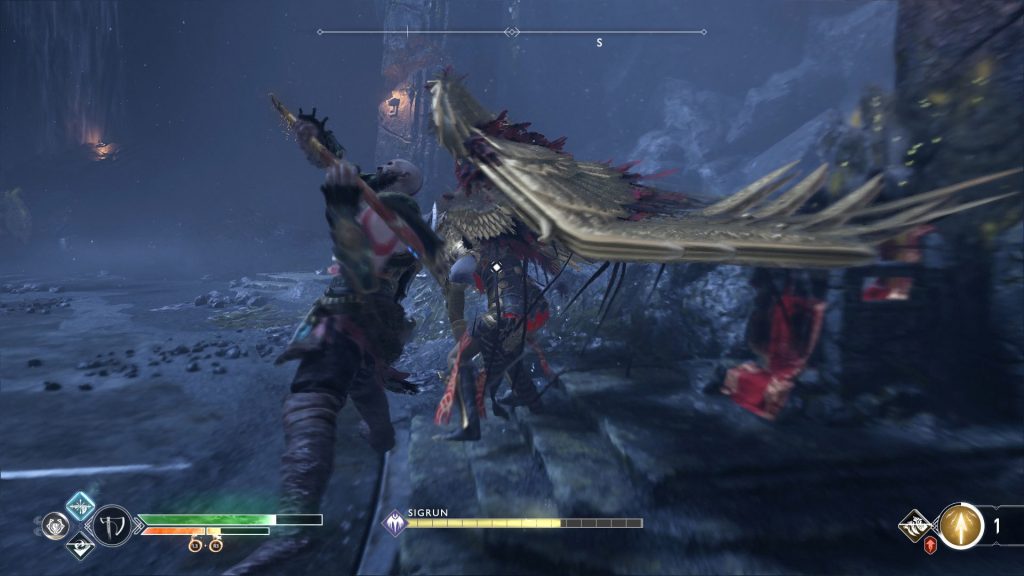 Only really hit Sigrun a couple of times with the Leviathan axe when you get close as over-committing to attacks leaves Kratos open to huge damage. Activate a runic attack, follow up with a few swings of the axe and then retreat. Watch how she moves and try to read the attack she’s winding up to use. Unblockable attacks are always telegraphed by a big red circle and attacks that can be parried are led by a yellow circle. Roll out of the way of red circle attacks and parry or block yellow circle attacks. 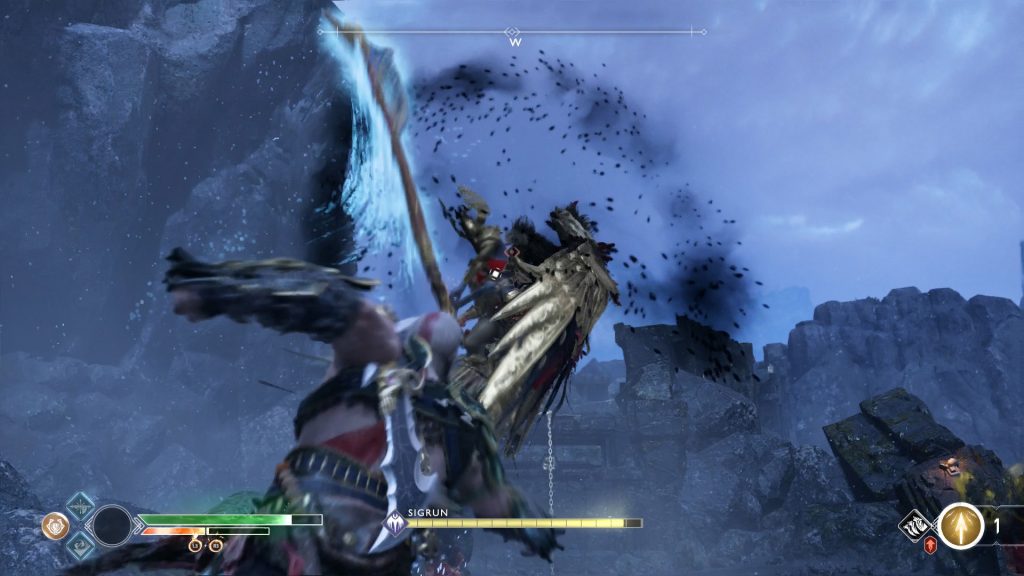 Probably the best tip for fighting Sigrun the Valkyrie Queen is to throw the Leviathan axe at her, specifically, when she’s in the air preparing an attack. Whenever she launches into the air, throw the axe. Whenever she begins floating, throw the axe. Just make sure to hit. Whenever the axe hits her while she’s in the air, she will fall to the ground and be stunned for a few seconds, just long enough to get in some free hits. The only time she won’t fall to the ground is during the barrel roll attack or when she’s trying to pounce on Kratos’ head.

It’s certainly not an easy fight, and stringing all these tips together is only part of the work, the rest is up to you. Beating Sigrun the Valkyrie Queen is going to take time and a bit of practice, but with the right armor, gear, and skills, it should become far easier than running in without a plan.