The upcoming HD version is perfect for newcomers, although it offers little for returning players besides higher fidelity.

Welcome to the world of Lordran. If you’re new to this land of dwindling fire and hollowed undead, then you have a great quest ahead of you. One that will kill you, on many occasions, but don’t worry about that right now. Death is never the end in the world of Dark Souls, and judging from our time with Dark Souls Remastered, it’s never looked more beautiful.

“Beautiful” isn’t a word we’d normally associate with Lordran’s ruined architecture and decaying inhabitants, but that’s the key selling point of the upcoming remaster. Originally released in 2011, Dark Souls has certainly aged over the last seven years, but this new coat of paint almost brings it in line with many of today’s releases.

“Almost” being the operative word. Since this is a remaster and not a full remake, expectations should be managed. Textures have received some vast improvements, particularly on the PS4 Pro edition we played (and, presumably by extension, the Xbox One X version), which outputs at 4K resolution. The PC version of the game will go a step further, offering 2K (read: big) textures, which could make all the difference to an audience that is already used to the improvements found in the unofficial fan-made DSfix patch. 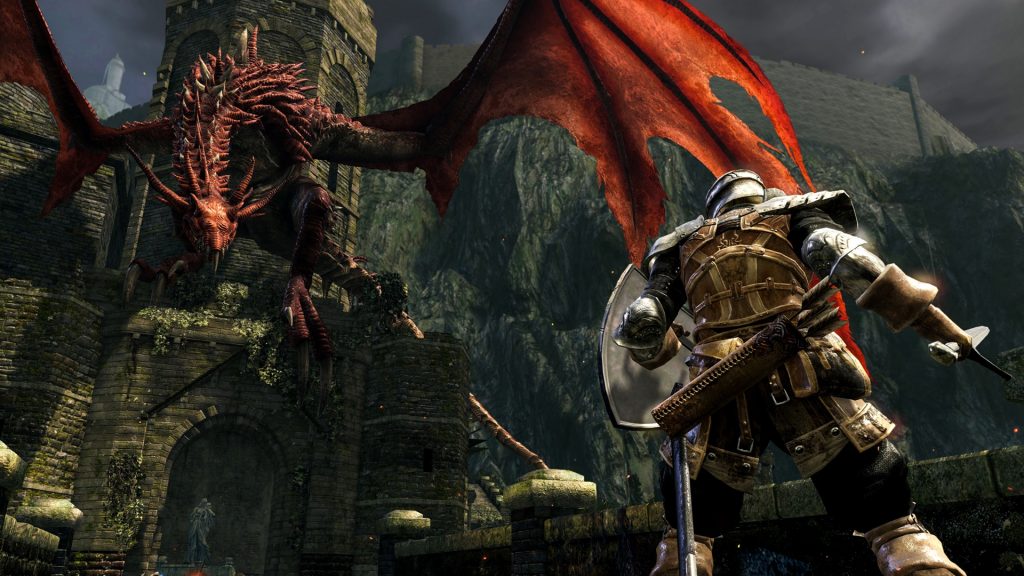 These textures add a new dimension to the world, with gleaming wet stone walls and fluffy parcels of moss popping out from the cracks. Speaking of cracks, the game’s first boss, the Asylum Demon, offers an early look at the extremities of the visual updates with its extra-grotesque booty filling your view as you circle-strafe around it. Details on all the enemies we encountered in the first hour are much crisper, the muddiness of the original game giving way to an extra layer of sharpness, like a layer of vaseline has been removed from the lens.

This will be a boon for Dark Souls newcomers and veterans alike, since a lot of the game’s lore and worldbuilding can be found in the little details around the world. Enemies are not just enemies, but inhabitants of Lordran that betray slivers of insight into the nation’s past, and its encroaching corruption.

While textures have received the full remaster treatment, the underlying geometry of the game’s models seem mostly unchanged. This typifies the Dark Souls Remastered experience, from what we played. As much of the core game as possible has been kept intact, since even small changes to gameplay can destroy the authenticity of the experience. With some fans hoping for big changes and fixes, it appears that the remaster will cater mostly to those new to the game and those returning players looking for the true Dark Souls. Again. As opposed to a freshly remade version.

Which explains the unedited character models, since this would have a cascading effect on the enemy’s hitboxes, which in turn could change the feel and timing of the combat. The last thing players jumping on the game want is to be told that they aren’t playing the ‘real’ Dark Souls. 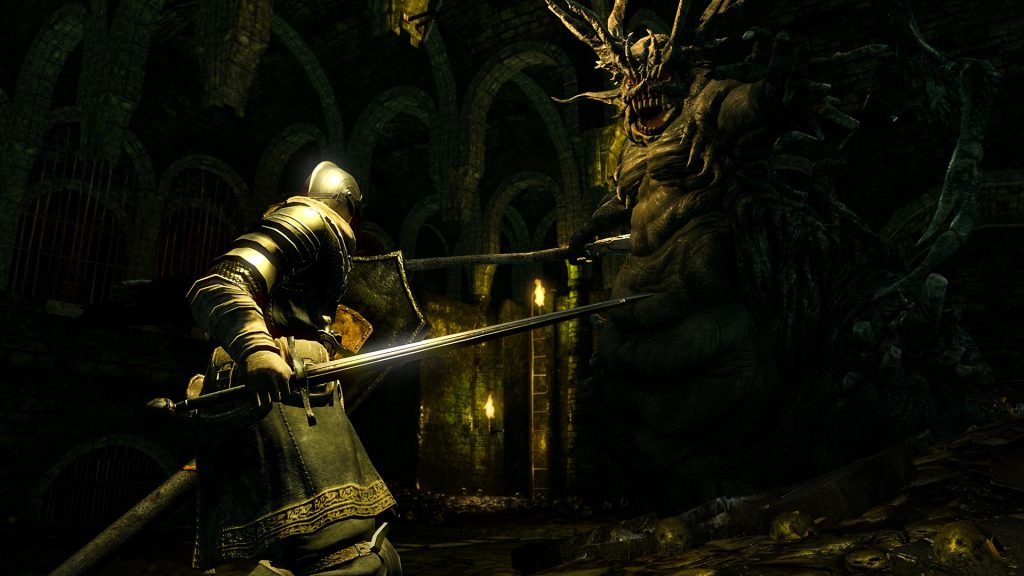 That isn’t to say that there aren’t any improvements. Dark Souls Remastered has some quality-of-life upgrades which won’t break the balance of the experience, but which will save time and maybe even a death or two. In both Dark Souls sequels the jump button is mapped to L3 while running, giving players a little more precision than the original’s ‘hold button to run then tap same button to jump’. This is still the default control configuration for the remaster, but added input options allow you to change a few buttons to whatever you like. An uncommon addition for console games, but a welcome one nonetheless.

Your Estus flask, the game’s upgradable healing item, and one of the few things in the game standing between you and yet another death, is also now always within easy reach. Pressing down on the d-pad cycles through your equipped items, which in the throes of battle against a pernicious boss can be annoyingly unwieldy. Holding down on the d-pad now resets the cycle, bringing you straight back to the Estus flask. This saves you precious seconds and lets you focus on the battle at hand which, in true Dark Souls fashion, is already going to present enough of a challenge without any frustrating UI annoyances.

Consumable soul items which add to your number of souls – the game’s currency and experience points – can also be used in multiples, rather than one at a time. No real added value when it comes to game feel here, it just shaves off precious seconds and button presses. Regardless, this is something fans have been asking for for a while.

Perhaps the biggest improvement in Dark Souls Remastered, however, is the greatly upgraded frame-rate. We’re promised 60fps on PS4 and Xbox One, a vast enhancement on a game which struggled to hit its 30fps goal on PS3. Finally areas like Blighttown will be less of a, well, blight once we’re able to navigate its twisted walkways without wrestling with the game’s engine as well as its enemies. 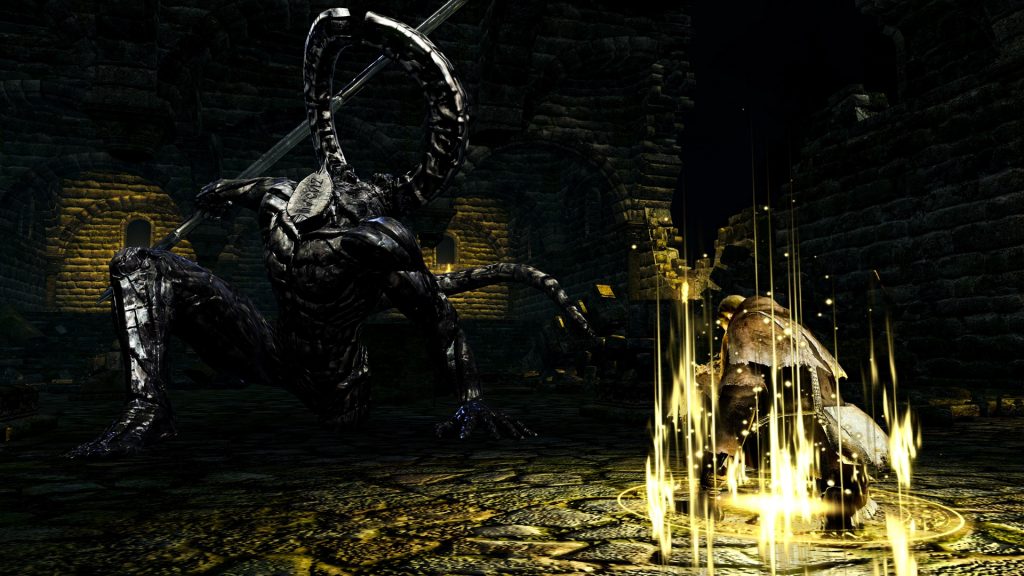 One thing we’re very glad the developers haven’t touched, meanwhile, is the game’s audio. Dark Souls’ soundtrack is moody and unobtrusive for the most part, but sticks in your head, while it’s choral boss melodies always get your heart racing as you size up the latest thing that’s definitely going to kill you. The game’s sound effects, particularly the audio for your medieval arsenal clattering on shields or the telltale sound of a killing blow, are given plenty of room to resound in this epic fantasy..

What remains to be seen is whether the promised 30fps remains stable on the Switch version, which offers perhaps the most intriguing addition to the game: portability. It’s going to be a difficult choice to decide between a zoomy 60fps and the prospect of Dark Souls on the bus. But there are a lot of fans out there who will likely double or triple dip on this release. If you’re new to the series then welcome, you’re about to find out why it has such a large and passionate fanbase. Good luck and have fun dying.