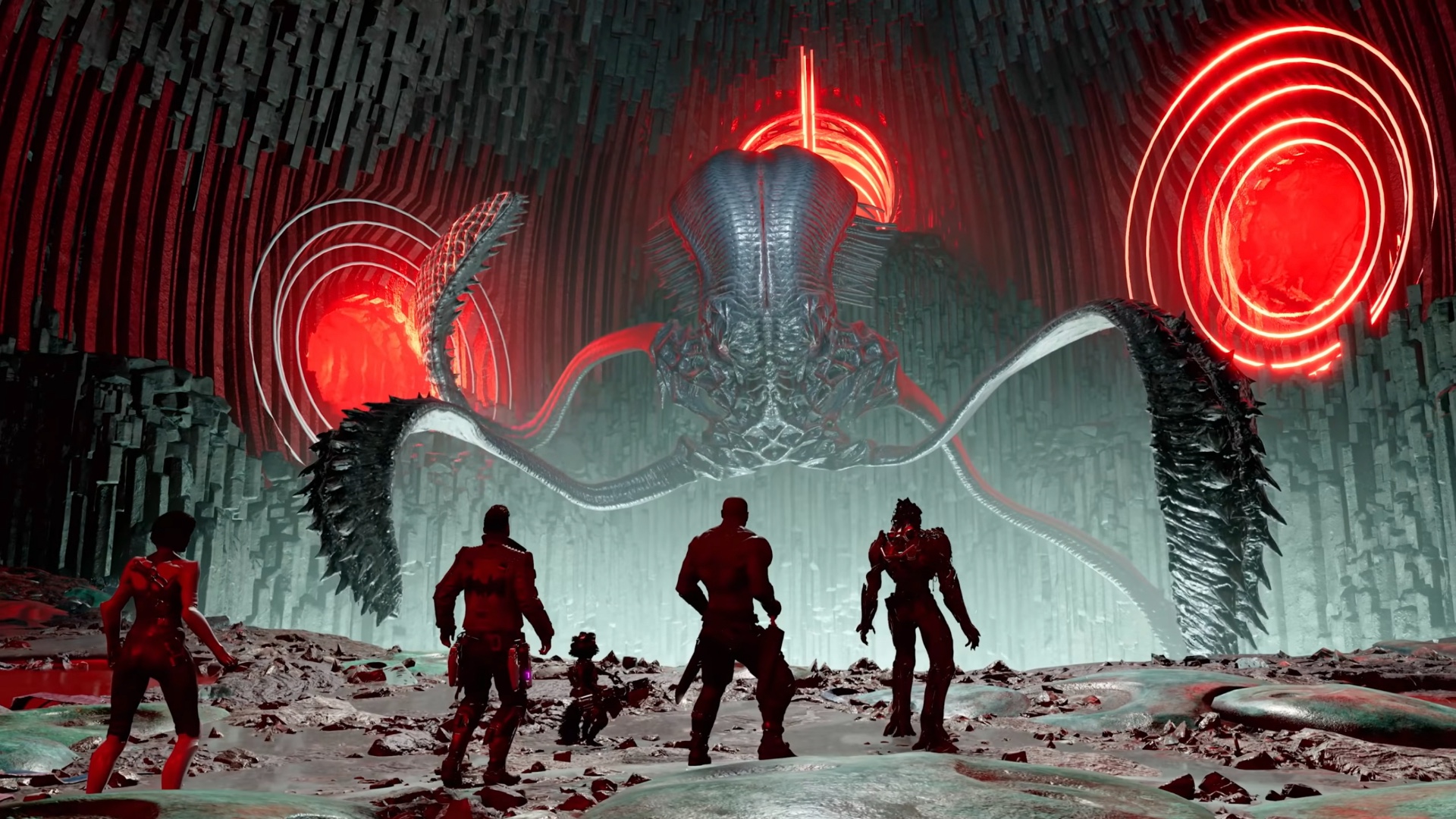 Chapter 4 of Marvel’s Guardians of the Galaxy is called ‘Monster Queen’ and towards the end of the chapter players will need to defeat Lady Hellbender’s Monster known as the ‘Dweller-in-Darkness’.

When Peter uses his Tactical Scan of the large squid-like creature, the description reads: “Appendages vulnerable when within range. Tentacles could be severed if frozen. Expelled projectiles can be reutilized as weapons.”

During the first phase players need to avoid the tentacles bashing into the ground, which is easy enough to do as you need to avoid any areas of the ground which are glowing a red colour.

Whilst the tentacles are on the ground, attempt to use Groot’s Entangle ability to trap them a little longer. It won’t cause much damage itself, but will allow you and the team a bit more time to damage the monster itself.

Keep going until the monster is staggered and glows red. Once this happens it will keep both tentacles down giving you and the Guardians enough time to really go to work on it. Pick one tentacle to focus on and give it everything to bring the health bar down. Eventually you’ll do enough damage that the Monster will dip its tentacle into a nearby red jelly pool as it attempts to regenerate health.

When this happens you should receive a Call-To-Action button prompt. Press the button to freeze the tentacle in the jelly, giving Gamora the opening to slice it off with her sword.

Do this for two tentacles before the second phase of the fight starts. 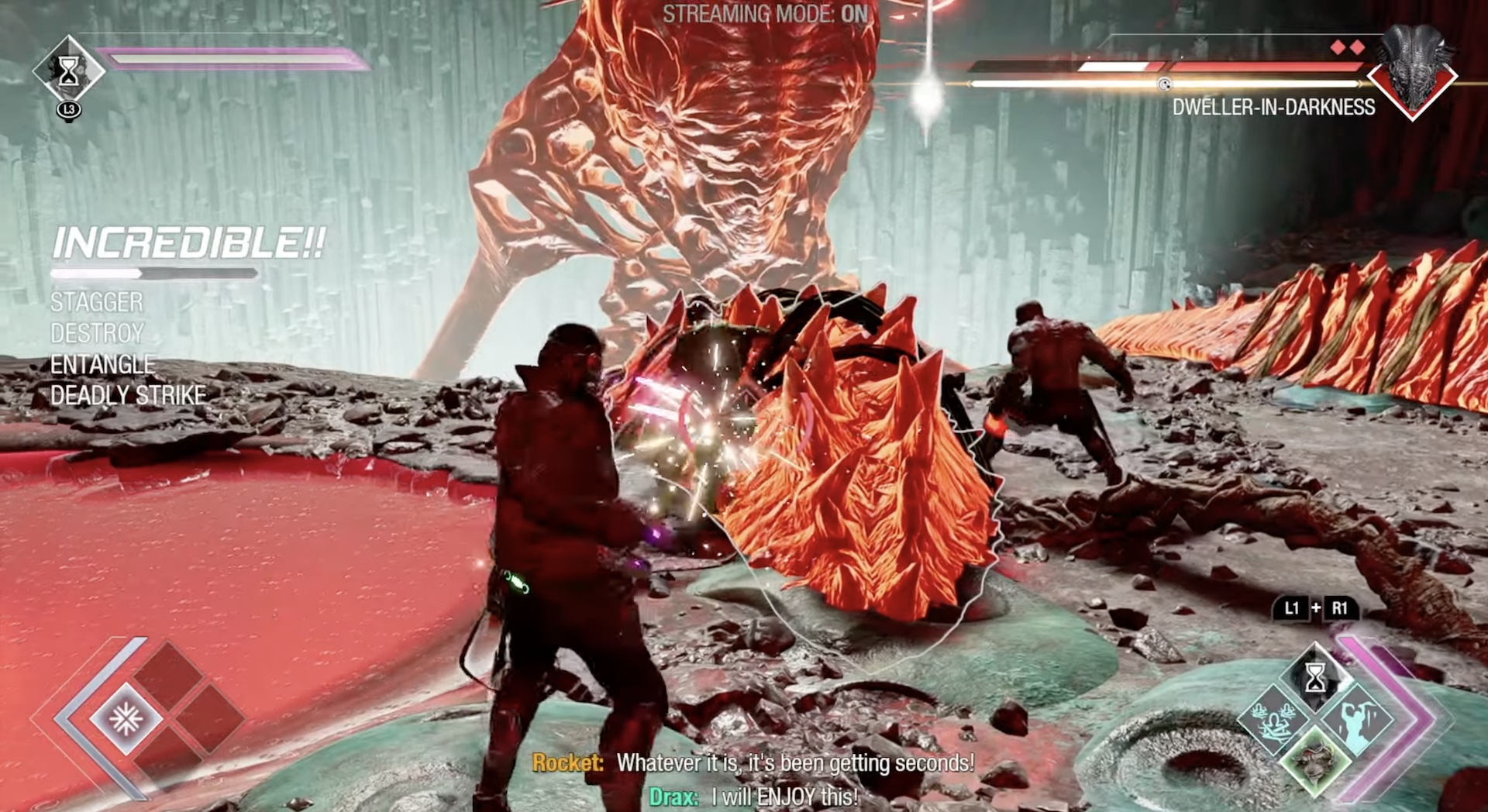 In the second phase of the boss fight with the Dweller-in-Darkness, the monster will also spit out jelly cubes which will attack the team on the ground.

But generally speaking, this phase of the boss fight is the same as the first. You need to avoid the tentacles, stagger the monster, damage the tentacle and eventually freeze it so Gamora can slice it off. You just need to do this whilst also dealing with the threat of the jelly monsters too.

Also note that when the Monster attempts to dip its remaining tentacles in the red jelly pools, it will do so on the pools on the left and right of the monster, not on the ground where it did the first two times. Either way it makes not a lot of difference. You’ll get a button prompt and Gamora will slice it off. Just be wary you don’t miss your chance.

When you’ve sliced off the remaining two tentacles the boss fight will move to the final phase. 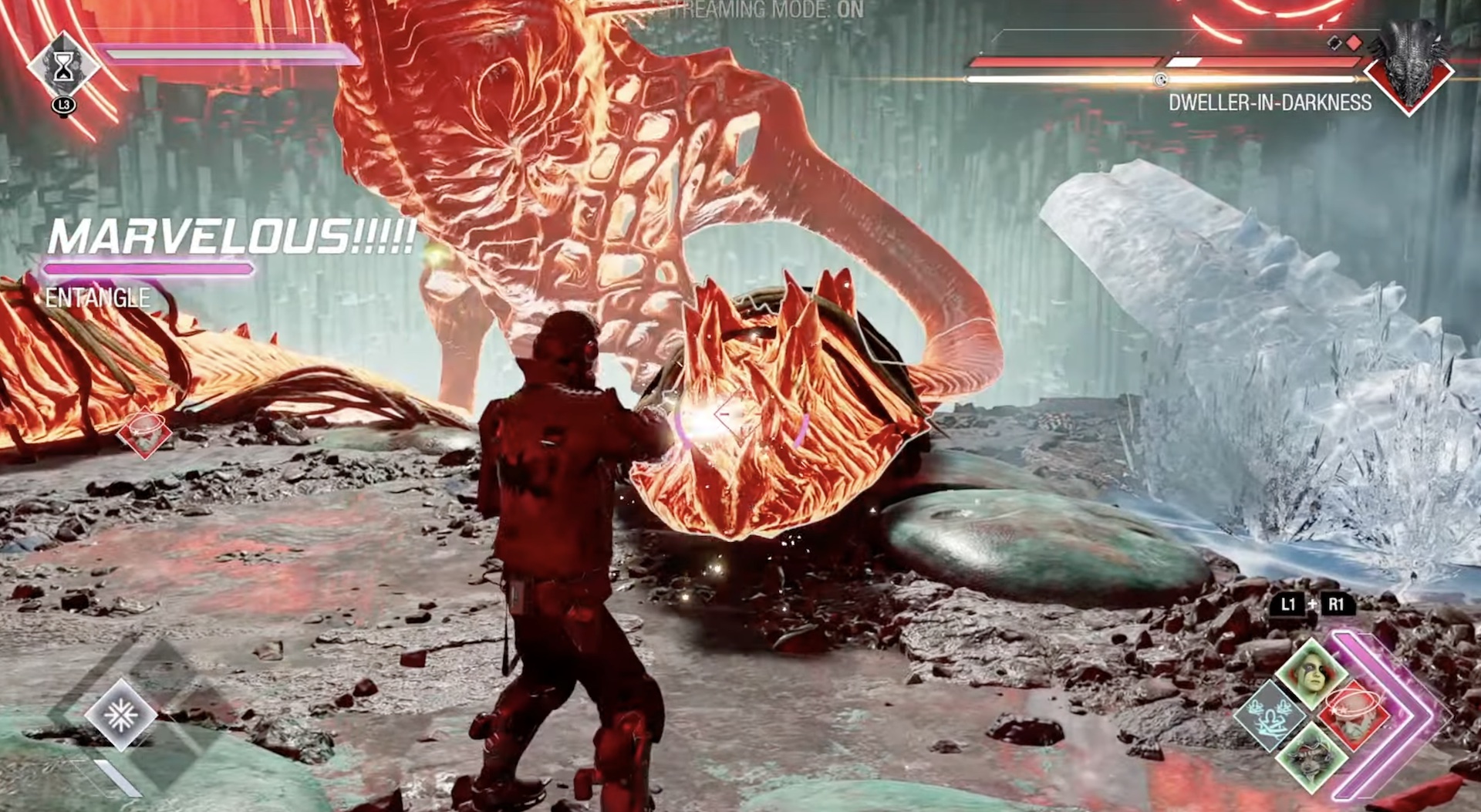 Once you’ve removed all tentacles the boss fight will enter its final phase, with the Dweller-In-Darkness throwing more and more jelly cubes at you.

Eventually, the boss will toss out a larger explosive bomb, and Drax will shout that it could be useful if cooled. This will initiate a command prompt to appear and if you freeze it, Draw will throw the bomb back at the Dweller, filling its stagger gauge. Repeat these steps until the stagger gauge is completely full.

You’ll then receive one final call-to-action prompt, which when pressed will initiate a cinematic where Gamora kills the Dweller once and for good and finishing the chapter.

That’s everything you need to know about defeating the Dweller-In-Darkness in Marvel’s Guardians of the Galaxy. However, if you’re looking for more guides then follow the links below for more helpful tips, tricks and explainers.