Fall Guys: Ultimate Knockout is the hottest game around right now. From social media to subReddits, everyone is talking about this massively multiplayer party game. There’s nothing else quite like it out there!

Inspired by game shows like Wipeout and Takeshi’s Castle, Fall Guys: Ultimate Knockout has you going up against 60 other players to be the last one standing. You’ll take on competitors in battles of balance, platforming, and more in an absolutely hectic setting. Stay on your toes, keep a keen eye on the competition, and utilize your best twitch skills if you want to survive!

Need a bit of help hanging in there until the final round? We’ve got a 5 tips and tricks that should make your battle royale experience a bit more manageable.

There are multiple challenges in Fall Guys: Ultimate Knockout that put you in mad dash for the finish line. This causes large clusters of players that make for quite the headache. If you’re not careful, you’ll end up getting trampled and stomped in your rush for the goal. Instead of diving head-first into danger, take a moment to spot the choke points other players are getting caught in. Find a way to sneak around the competition, or jump over the piles of players to come out ahead in each challenge.

Fall Guys: Ultimate Knockout is going to be absolute insanity from start to finish. Racing against 59 other players will make for some truly crazy moments, but there’s a certain type of player you want to keep a lookout for. Some contestants take just as much joy in ruining the fun for other players as they do in winning. Like it or not, you’ll have to deal with players who make it their mission to push you off a platform, out of an arena, or into harm’s way. You can usually spot these troublemakers from a mile away, so do your best to skirt around them! 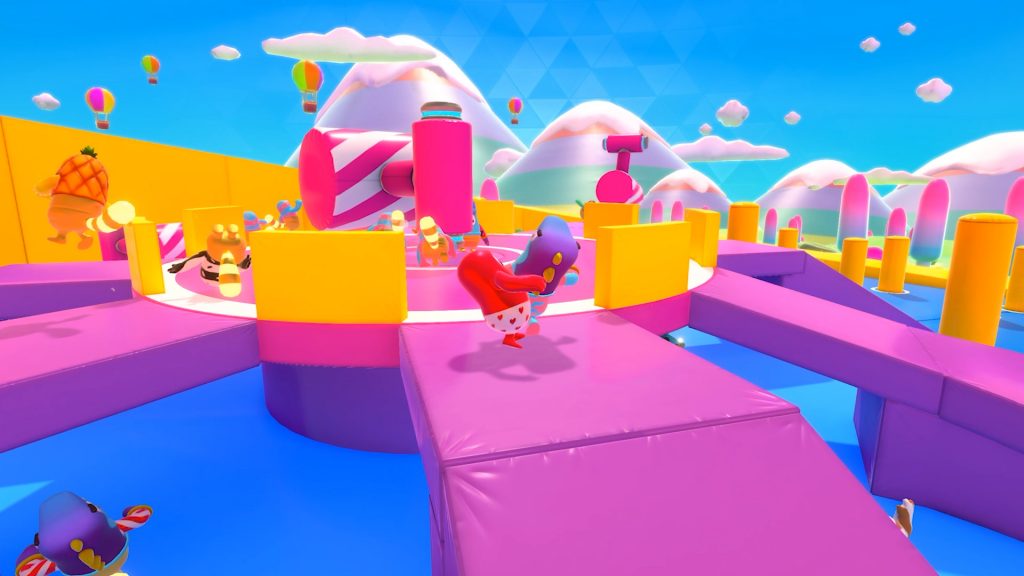 #3. It’s not always about being first

Fall Guys: Ultimate Knockout may make you feel like you need to be #1 in every round, but fighting that urge is a key to victory. Most games will take multiple rounds until they get to the final showdown. You don’t have to land first place in those earlier rounds in order to move on. Pay attention to the ticker in the upper right-hand corner that tells you how many players can qualify for the next round. This will help you know where in the pack you need to fall in order to progress. Hedging your bets and playing smart will help you reach the last round, and that’s where you really want to give it your all.

The mechanics in Fall Guys: Ultimate Knockout are extremely simple. No matter what round you’re in, all you have to do is run, jump, and climb your way through the challenge. That said, there’s one other mechanic you can use to give yourself an edge. You actually have the ability to jump and dive, which lays your character our in the air. Using the dive can be a great way to lunge over chasms, vault past opponents, and make the final push for the finish line. That last little stretch for the goal could be what takes you to the next round!

Turns out the mantra of John Cena are words to live by in Fall Guys: Ultimate Knockout. Every round of play will quickly turn into absolute chaos no matter how hard you try to keep a grip on things. The thing is, this mayhem paves the way for some amazing comebacks. No matter how bad you think you’re doing, someone else in the mix could be screwing up even more. No matter how many times you fall, get back up and keep trying. You might be surprised at how you can eek out a pass to the next round at the last second. 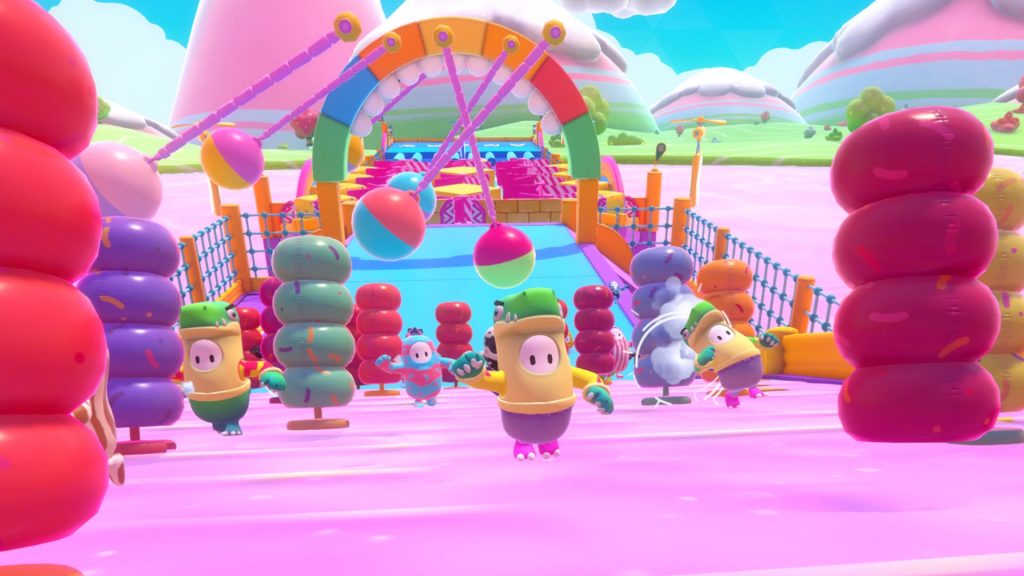 Fall Guys: Ultimate Knockout is over-the-top, silly, rage-inducing, and unbelievably fun. Even with our tips, you’ll have a few victories here and there, and a ton of failures along the way. It’s important to remember that it’s all just a game, so you might as well look good as you’re plummeting to your peril!

Fall Guys: Ultimate Knockout offers a rotating online store that’s full of cosmetic items. The store offers various skins, costume pieces, and emotes that allow players to customize their look. While there are some items that rotate in and out every day, there’s also Featured Items that stick around for at least 72 hours. Here’s the latest round of Featured Items that you can purchase with earned in-game currency, or by spending real cash. 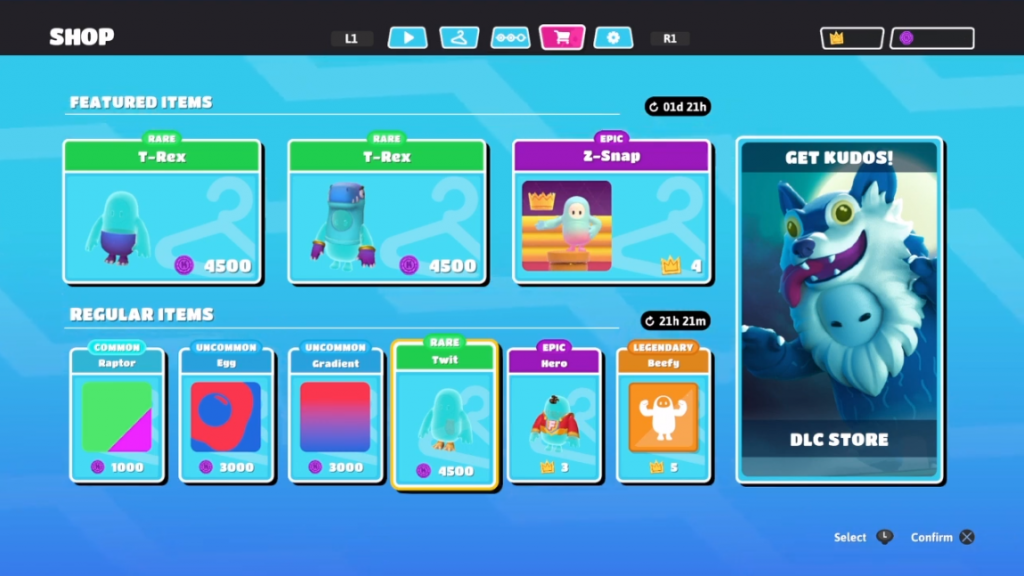 If you’re going to buy the T-Rex Bottoms, you might as well complete the outfit with the T-Rex Top. This costume piece will give you a T-Rex head to wear as a hat, which is sure to instill fear in the competition. The T-Rex Top also comes with a pair of gloves featuring T-Rex claws. The T-Rex Top is priced at 4,500 Kudos.

Fall Guys: Ultimate Knockout rarely gives you a moment to stand still, but if you’re feeling particularly brave, you can take a second and taunt the competition with an emote. The latest Featured emote is the Z-Snap, which is sure to send the competition reeling if they see you snapping in their direction. If you’re feeling sassy, you can snag Z-Snap emote for 4 Crowns.

Kevin Cassidy has been covering all things Nintendo for over 15 years now, and has been leading the weekly GoNintendo Podcast for just as long. Kevin is also quite passionate about pro wrestling, anime, comic books, and more! You can reach Kevin at kcassidy@gonintendo.com, or follow him on Twitter via @GoNintendoTweet.