Everything We Know About Borderlands 3 So Far

To think that just a month ago we knew next to nothing about Borderlands 3. In that time we’ve not only had a walkthrough of the Mask of Mayhem trailer, but two separate gameplay trailers which give us a much clearer idea of what to expect from the game. In short: everything. Gearbox is throwing everything you’ve ever loved in previous Borderlands games (yes, that includes Tales From The Borderlands), plus a ton of new diverse environments and characters. And lots of guns. Over a billion of them, allegedly.

So let’s dive into the Mask of Mayhem trailer, which is made up of assets from the game and gives away a few secrets right off the bat.

The teaser opens with a look at the cultist enemies in the game before swooping around the new main antagonists, The Calypso Twins. At this point you might also notice a blinking light in the top left hand corner. Yep, that’s morse code. Nope, it tells us absolutely nothing. It actually says “Don’t forget to drink your Ovaltine”, according to Gearbox Software CEO Randy Pitchford during the PAX stage presentation.

Of course, Claptrap will also be in the game. Not playable again this time, but he’ll be rolling around the world no doubt annoying everyone he comes into contact with.

In fact, the majority of characters (if not everyone) you loved and/or hated from previous games will be back. That includes Tiny Tina, who’s grown up a bit since Borderands 2 (haven’t we all) and is sporting a new rabbit mask.

Fans of Tales from the Borderlands will be pleased to see Vaughn from the game standing astride a pile of dead bandits. And yes, he’s shirtless. And sporting some new facial hair, too.

Every gun you see in the trailer will be in the game, of course. Though, with over one billion guns it’s possible you may never actually see them.

The section featuring Amara, one of the new vault hunters, features a rakk flying around with a skag on its back, but Pitchford is keen to explain that this will not be happening in the game. As amusing as that might be.

Of course Moxxi the bar owner is back, but her bar in the teaser seems a little run down. Thankfully this is not how it will appear in the final game. Pitchford promises it is “awesome” and “really cool”. We’d expect nothing less.

And what of Handsome Jack’s mask? The antagonist of Borderlands 2 (and ghostly companion in Tales From The Borderlands) can’t be coming back to life, surely? Pitchford quashes any hopes/fears of that happening. “He’s DEAD. You killed him! But we’re jerks, so we put that in there.” Moving on to gameplay trailers, between the two of them we now have a lot of confirmed returning characters and know the names of the vault hunters and the protagonists. There are also a couple of technical details revealed and, of course, the all important release date.

The big baddies of the game have been revealed to be The Calypso Twins and… is that a glowing tattoo we see? Could one, or both, of the twins be an evil siren? With only six in existence at one time, that brings the total we know about to at least five. Lilith, Maya, Angel, Amara and now Miss. Calypso.

Speaking of sirens, Lilith is back and here we get a first look at the new facial animation that you’ll see throughout both trailers. Borderlands 3 is looking far more technically superior to the Pre-Sequel.

The vault hunter names have been confirmed to be Moze the Gunner, FL4K the Beastmaster, Amara the Siren, and Zane the Operative.

There are some blink-and-you’ll-miss-it sections in the latest trailer that show new enemies, like these cat bandits who can wield guns. Those claws and teeth look like they’ll hurt too, for some close-quarters combat.

Split. Screen. Confirmation that the game will feature some couch co-op action for console versions of the game.

The trailer ends with the much-anticipated (despite being leaked yesterday) release date. You’ll be able to jump into the shoes of your favorite new vault hunters on September 13th.

Speaking of leaks, the box art that has been doing the rounds has been confirmed to be likely true, thanks to the artwork being used to close the video.

New worlds to explore! It looks like we’ll be leaving Pandora this time around, which explains the diverse environments shown in the game’s reveal trailer.

The latest trailer also confirms the game will be exclusive to the Epic Games Store on PC, as there’s no sign of the Steam logo. Whether that’s for good or ill, that’s for you to decide.

There’s tons of other hints and reveals throughout all of the trailers released so far, so if you’re a fan of the series be sure to scrub through them all second-by-second to see what else you can find! 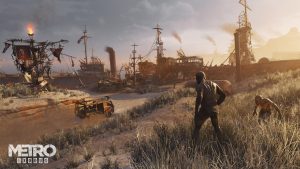