Your Guide To Hacking In Cyberpunk 2077

The world of Cyberpunk 2077 is a dangerous one. Cameras watch your every move, roving gangs wait around each street corner, and an angry police officer might appear right behind you at the worst moment. Night City requires you to be ever-vigilant and always prepared. That’s why it’s so important to get a leg up on the competition and utilize V’s hacking skills.

Hacking and Quickhacking is a key part of your adventure in Cyberpunk 2077, and there’s no doubt it’ll make your time in Night City a lot easier.  Hacking can provide you with countless tactics to set up a fight – or when things go wrong.  Wondering how to make the most of hacking on your journey?  The steps are simple, but the results are invaluable.

While there are plenty of ways to use hacking to your advantage, hacking in and of itself is pretty simple.  There are basically two different ways to hack that’ll earn you benefits.

The more common approach is Quickhacking, which will come in handy during missions and when directly – or indirectly – attempting to deal with enemies.  Quickhacks allow you to connect to random electronics and enemies in order to exploit them to your advantage.  Quickhack a security camera in order to turn it off, a radio to cause a distraction, an enemy’s enhanced vision cybermods to turn off their feed, and so on.  These Quickhacks are perfect for when things get out of control, or they can be used to keep a low profile when trying to sneak through a mission.

The second type of hack is a bit more involved.  Those looking for a bit more devastation will want to utilize Breach Protocol, which is a unique type of Quickhack.  Initiating a Breach Protocol will bring up a mini-game that requires you to shift around bits of code in order to string together command lines.  If you manage to successfully complete a Breach Protocol, you’ll net some major bonuses or reduced RAM costs for additional Quickhacks.  You can access an enemy network to bend the bad guys to your will, enter access points to score eddies and data, or decode encrypted shards. 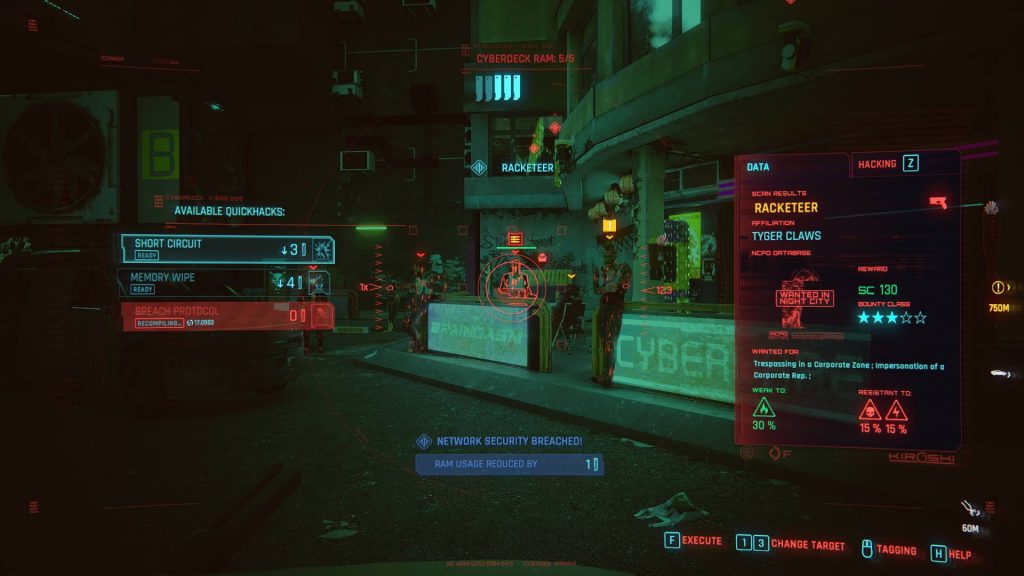 ‘Short Circuit’ is a great way to take out an enemy non-lethally from afar.

Using a standard Quickhack is easy enough. You highlight your target, bring up the hacking options, and choose one based on the cost and your available RAM. Utilizing Breach Protocol takes a bit more patience, but as mentioned above, it can provide some serious benefits.  The Breach Protocol layout can be somewhat confusing at first, and the game itself doesn’t do a very thorough job of explaining things.  Thankfully, this is a situation where the layout makes things look more difficult than it really is.

There are four main components to Breach Protocol; the Code Matrix, Sequence, Breach Timer, and Buffer.  In order to crack the code and complete a successful Breach Protocol, you’ll need to pay attention to each one of these. 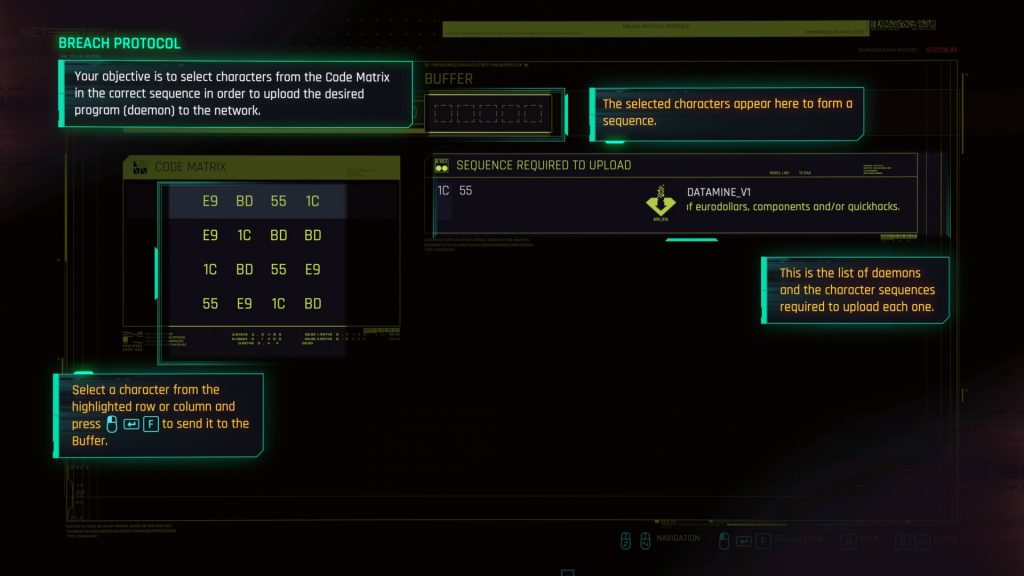 Breach Protocol might seem complicated, but it never really gets too hard.

Here’s where things get a little tricky.  You can’t scan through the entire Code Matrix at will.  You only have access to single rows and columns while hacking, and where you can scan through next depends on the choice you make.  Each letter/number combo selection will open up the next row or column of options, so you’ll be snaking your way through the entire Code Matrix to hopefully lock in a successful Sequence to activate the hack.  If you plan ahead, you might be able to work your way through the Code Matrix and activate multiple Sequences at the same time.

Of course, it’s not as simple as just selecting Sequence bits and locking in a hack.  You’ll have to deal with the Breach Timer and Buffer while you’re hacking.  The Breach Timer is a clock that’s constantly ticking down, meaning you only have so much time to complete a Sequence.  While the Breach Timer is very important, the Buffer might be the most important of all.  The Buffer shows the amount of tiles in the Code Matrix you can select.  In other words, if you have a Sequence that is 3 tiles long and a Buffer of 8 titles, you’ll only have a total of 2 chances to get things right.  If you fail 2 times, you won’t have enough tiles left over in your Buffer to succeed. 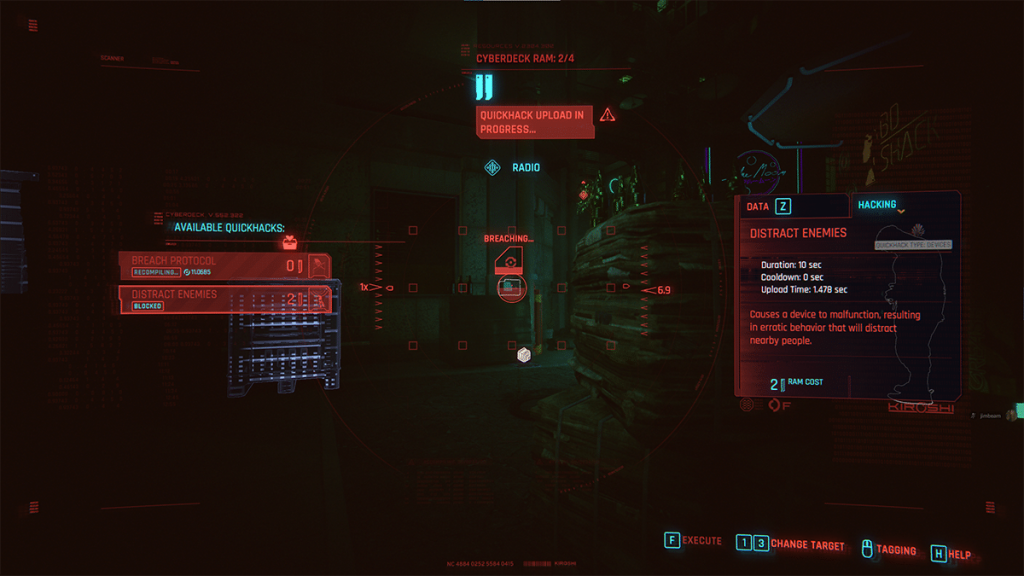 Hacking a radio from across the room so it can distract guards is a MAJOR part of stealth in Cyberpunk 2077.

Through a combination of both Quickhacking and Breach Protocol, you’ll be able to bring Night City to its knees. Smart use of both hacks can make you a silent enemy the opposition never sees coming. Even if things go off the rails, a few Quickhacks can turn the tide in your favor. Just remember to keep your cool, plan things out meticulously, and keep practicing your hacks. The right approach to hacks can take you from the slums of Night City all the way to its upper echelon of edgerunners. 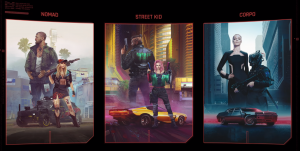 You’ll definitely make a few eurobucks as you play through Cyberpunk 2077, but sometimes you’ll want or need a little more cash than what the standard jobs and gigs dish out. We’re here to help you with that, choomba.