With Hyper Scape, Ubisoft is certainly giving their best shot at the battle royale genre. We’ll let you be the judge of their success; however, as we take you through everything you need to know about the new game.

How is it any different? 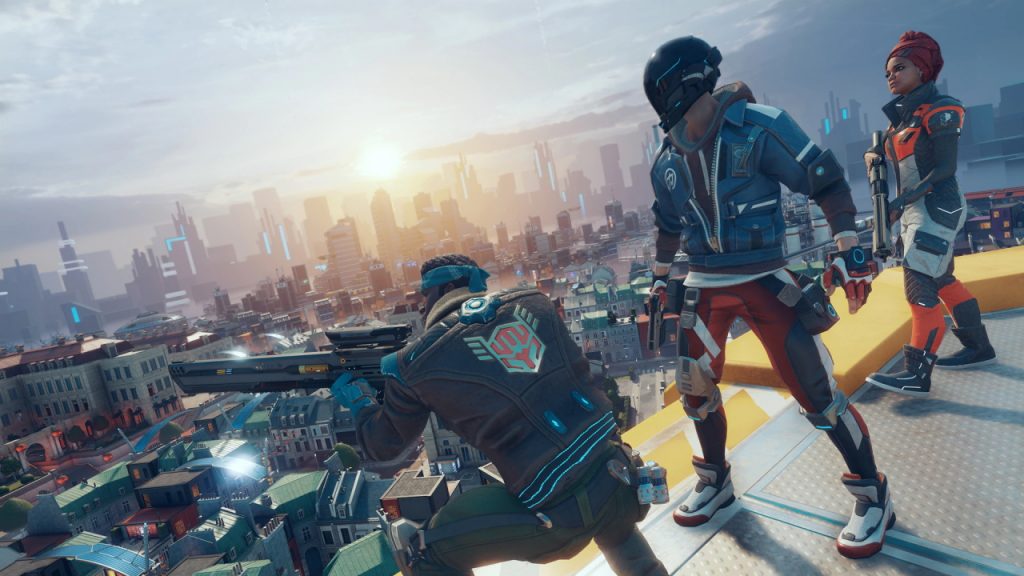 Hyper Scape is the new/upcoming battle royale arena-style FPS shooter from Ubisoft. While set in a virtual futuristic cityscape, the basic formula is one you’ll be well aware of by now – upwards of 100 players drop into an ever-shrinking map, scavenge for loot, and fight to be the last squad standing – but Hyper Scape brings a fair amount of new (and borrowed) ideas into the mix. Hacks and weapon fusions are the biggest elements, but the first thing you’re likely to notice when playing or watching footage is the sheer speed of the action.

Hyper Scape takes it’s movement straight from 90’s PC arena shooters like Quake and Unreal, and aims to encourage mobility, especially of the vertical kind. The core map of Neo Arcadia is littered with boost pads that can launch players high into the air, carrying fights across rooftops, monorails and beyond. The end phase of its core Crown Rush mode tries to make the most of this, spawning a crown that’ll grant any surviving team victory, provided one of their players can hold on to it for 45 seconds. Get ready to duck, dodge, dip, dive, and dodge through the city as all remaining players take up after you! 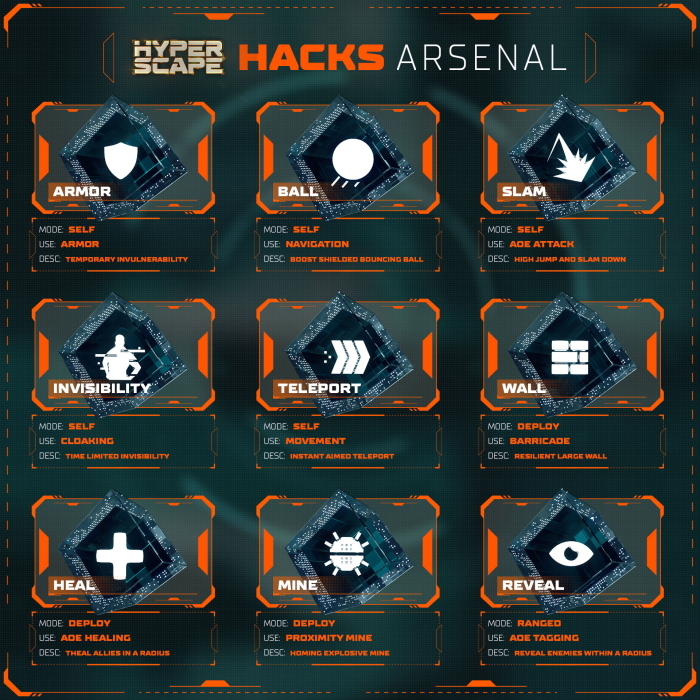 As it’s set in a virtual arena, Hyper Scape gives all of its combatants world-breaking tools called “hacks” to gain the upper hand in a gunfight. These hacks are collected as loot, and act as powers that players can deploy on a short cooldown. Mastery of hacks is as important as precise aim, and using them well makes for chaotic, exciting combat.

Currently there are nine hacks available:

Another layer to this system is hack and weapon fusing. If you find another copy of the weapons or hacks that you already have on you, you can “fuse” the new one into the old one, upgrading into a more powerful version. Hack upgrades typically reduce cooldown times, while weapon upgrades include increased magazine capacity and sometimes even a slight damage boost when upgraded to the max. Through this system, weapons naturally grow more powerful over the course of the match. And speaking of weapons… 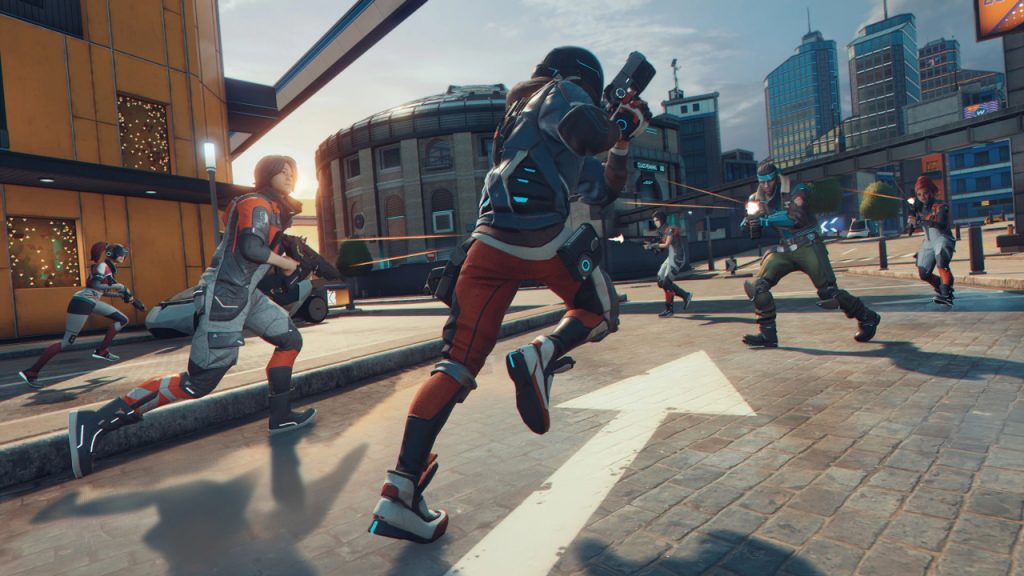 Unlike other BR titles, Hyper Scape’s weapons veer much closer to the guns of those old-school arena shooter mentioned above, than it does with more modern shooters. Right now there’s only one traditional assault rifle, sniper and shotgun. Instead, the arsenal is packed with weapons like plasma and grenade launchers, as well as more outlandish stuff like the Skybreaker energy weapon which deals greater damage the further you cannon its sparking orbs across the map. It takes a bit of time to acclimatize, but once you get to grips with the new toys, hopping through (and over) the streets of Neo Arcadia unleashing blasts of damage is, well, a real blast. 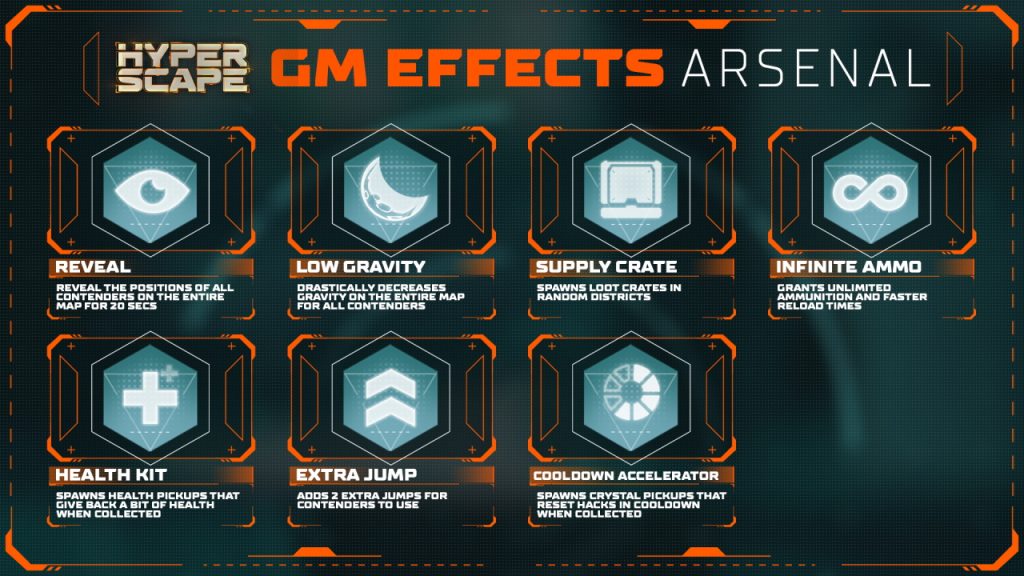 In a neat twist on the genre, Hyper Scape takes the concept of a virtual arena sport to another level by allowing Twitch viewers to weigh in on the match’s action. Broadcasted matches will let viewers vote for in-game events such as periods of low gravity, extra jumps, and even infinite ammo. They might not secure their favorite streamer a victory, but they’ll certainly add more chaos to the mix when they choose low gravity EVERY. SINGLE. TIME.

Hyper Scape has just wrapped up it’s first Technical Alpha on Ubisoft’s Uplay client for PC. Access was initially granted through Twitch drops, earned by watching a selection of streamers. However, you can now also register interest on the Hyper Scape website, as the streams are concluding. While this first PC technical test has ended, there’s already mentions of the next alpha and beta tests, which is coming back to PC on even more regions, and even to consoles, later this summer.

Either way, you needn’t worry too much. Though it’s currently in “technical test” stage, Hyper Scape has already been confirmed for full release soon this year. Keep an eye on the Hyper Scape Twitter account for news on the official release.

A quick glance at Hyper Scape may elicit groans for yet another battle royale joining a bulging market. Take a closer look, however, and provided you can handle the blistering pace, there are plenty of fresh ideas packed into this virtual coliseum. We’ll certainly be keeping an eye on the performance of this new battle royale beast both in-game and online as it gears up for a full release. 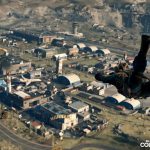 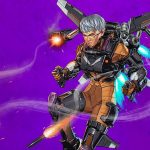