Pokemon Let’s Go! How The World Has Changed Since Red, Blue and Yellow

Pokémon: Let’s Go brings gamers back to the region of Kanto in a new take on a timeless classic. While there are many similarities between Pokémon: Let’s Go and Game Boy titles like Red, Blue, and Yellow, there’s also a plethora of new features to sink your teeth into.

A lot has changed since the 90s. Technology has advanced, and the way we approach games has shifted, with more ways to game than ever before. Pokémon: Let’s Go is a game that excels at blending original Pokémon elements and modern gaming in a way that feels both natural and approachable.

In doing so, long-time fans of the series feel right at home, while newcomers have the opportunity to experience the games that undoubtedly made Pokémon what it is today. Before there were thousands of different Pokémon variants, you had the original 151(152 if you count MissingNo) including the small electric rat who would go on to win all our hearts, Pikachu.

Before there were multiple regions and locations, you had the heart-warming scenery and soundscape of Kanto to explore on your adventure to defeat the Final Four and become a PokéMaster.

How the World Has Changed Since Red, Blue, and Yellow 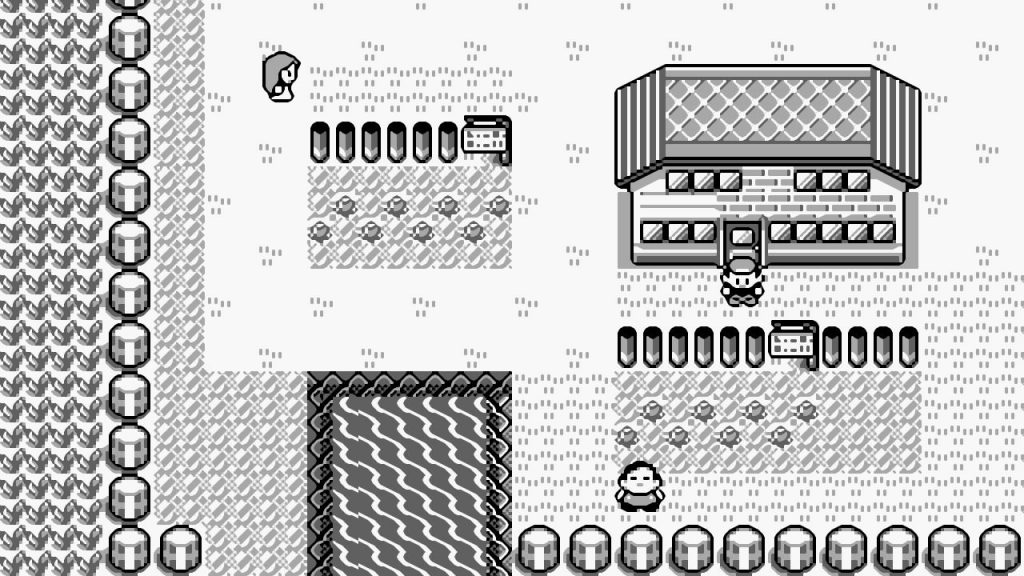 Pokémon Red, Blue, and Yellow were all exclusive to the Nintendo Game Boy. For those unfamiliar, the Game Boy is the predecessor of the current 3DS(and 2DS). It was a small, portable handheld system that used square game cartridges and boasted classics like 1989’s Tetris and of course Pokémon Red, Blue, and eventually Yellow.

Other Pokémon titles released for the Game Boy include Gold, Silver, and Crystal, with the larger Game Boy Advance housing titles like Ruby and Sapphire. Playing Pokémon on the Game Boy was a relatively simple affair. You had A + B buttons, a D-Pad, along with Start and Option buttons. 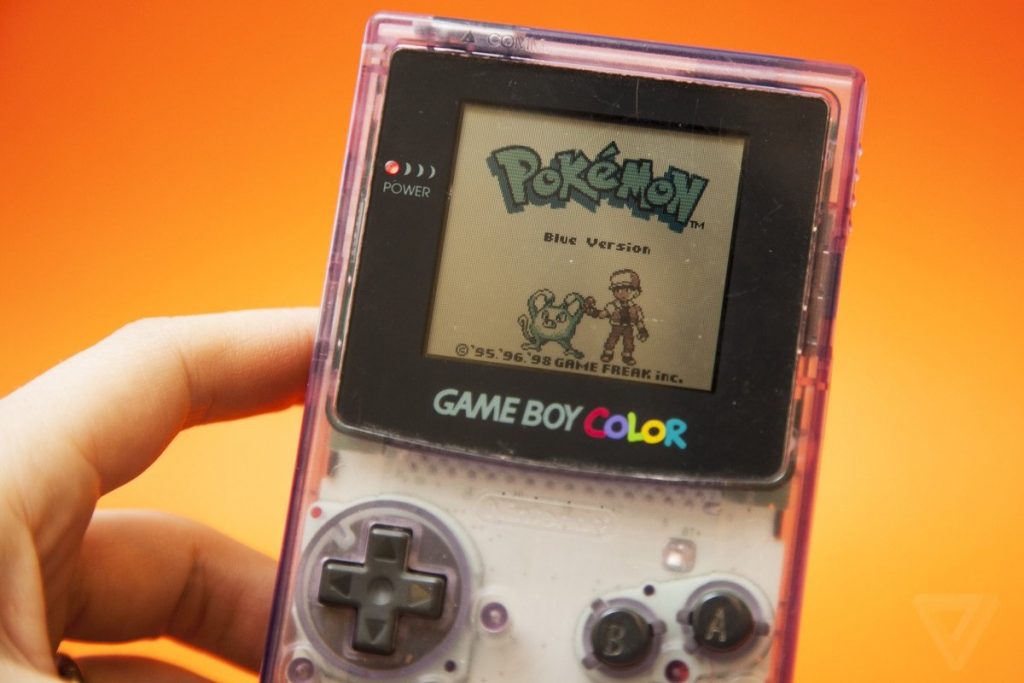 Playing Pokémon on the Game Boy was both limited, and wonderfully simple. © Nintendo, The Verge

Of course, it wasn’t as intuitive as the 3DS is today. You had no backlight to illuminate your character’s pixels on the small screen. Instead, you needed to use an outside light source(Which your mom would catch you playing up late as a result)if you wanted to play at night. To trade Pokémon with a friend, you needed to purchase an attachment in the form of a “link cable” before meeting up with your friend in person and connecting your Gameboys. The world before the Internet was strange indeed!

Nowadays, you have the convenience of internet access, especially on the Switch where you can instantly download a digital copy of Pokémon: Let’s Go. To get Red, Blue, or Yellow, you had to visit your local game store. Even in the games themselves, technology was limited. There’s no better example of this than comparing your Pallet Town bedroom in games like Red, Blue, and Yellow to Pokémon: Let’s Go. 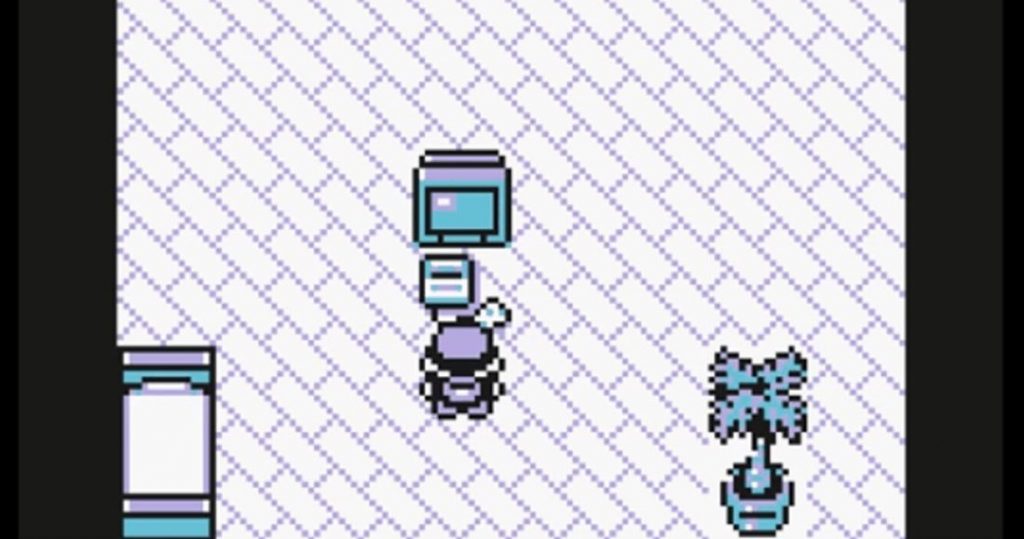 Your character’s Pallet Town bedroom was sparsely decorated with a bed, a tree, and an old box TV. © Game Freak

In Pokémon: Let’s Go, you can see a large TV and Nintendo Switch, along with a modern computer. In the Red, Blue, and Yellow versions, your room featured a huge, old-school box TV, a bed, a tree… and that’s about it. While this may seem sparse, it’s not a far cry from what our own bedroom looked like back in the 90s.

Despite growing up in the 90s, games like Pokémon Red, Blue, and Yellow feel strange to play in 2018. They’re like mini time capsules that seem ancient to gamers of today (particularly those born in the 2000s). This is one of the main reasons why Pokémon: Let’s Go is so brilliant, as it bridges the generational gap between games like Pokémon Yellow and today’s Pokémon GO and Ultra Sun/Ultra Moon variants. 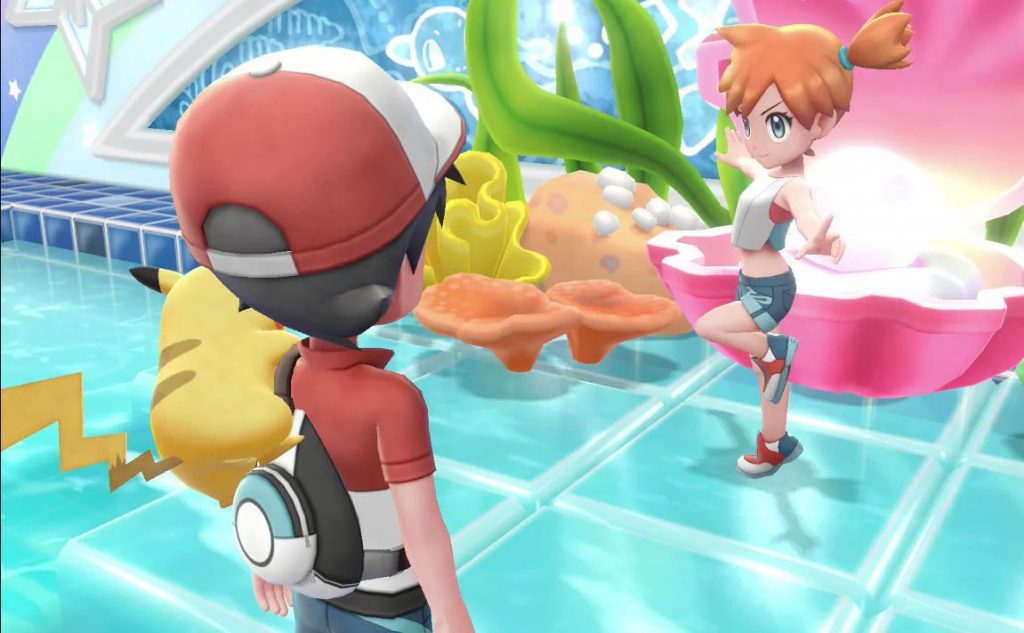 If you want to catch a wild Vulpix or Meowth, you’ll want to purchase Pokémon: Let’s Go, Eevee. If you’d prefer catching a wild Sandshrew or Growlithe, then pick up a copy of Pokémon: Let’s Go, Pikachu. Among the new features in Pokémon: Let’s Go is cosmetics, with collectible Outfit Sets for both you and your Pokémon.

In Pokémon: Let’s Go, Eevee, you can unlock Outfit Sets based on all of the Eeveelutions from both original Generation games and new ones like Sylveon and Leafeon. The graphics of the game are absolutely stunning, with attack and battle animations giving us a nostalgic Pokémon Stadium vibe. The better the move, the more visually impressive it looks on screen. 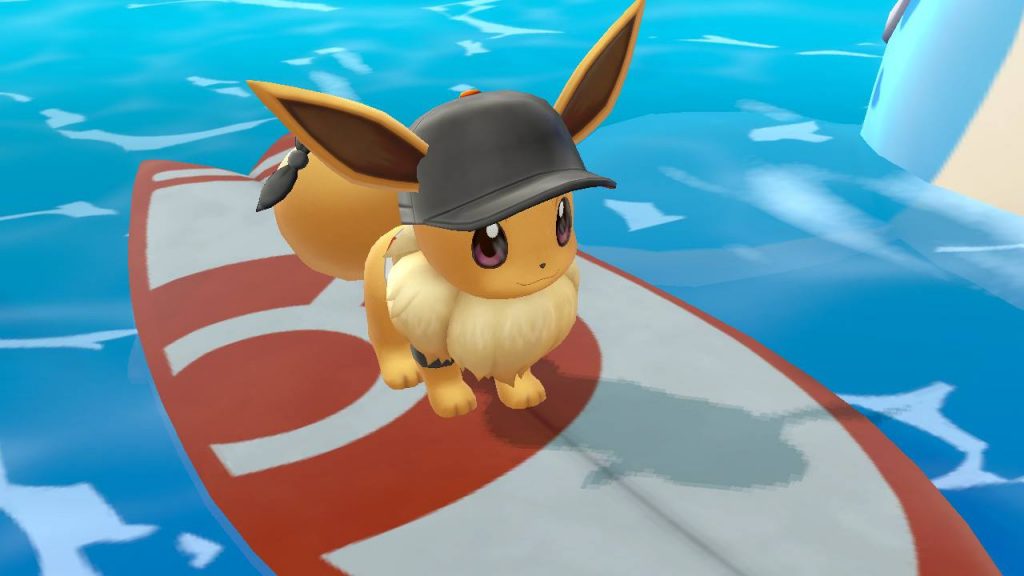 Sea Skim is, in and of itself, a cute little throwback to Surfin’ Pikachu in Pokémon: Let’s Go. © Game Freak

Prior to the game’s release, people had reservations about the idea of “remaking” a game like Red, Blue, or Yellow. Fortunately, Pokémon: Let’s Go isn’t your standard reskin. Unlike games like the Spyro Reignited Trilogy that offer a graphical remaster, Pokémon: Let’s Go takes advantage of its new home on Nintendo Switch by utilizing Joy-Con motion controls.

If motion controls aren’t your thing, you can play the game in handheld mode which adds in a gyro feature but is otherwise your traditional tap-to-throw setup. Alternatively, there’s a new peripheral for the game in the form of the Poké Ball Plus which works not only with Pokémon: Let’s Go, but also Pokémon GO on mobile. Speaking of Pokémon GO, you’ll find several crossover elements from GO in Pokémon: Let’s Go. 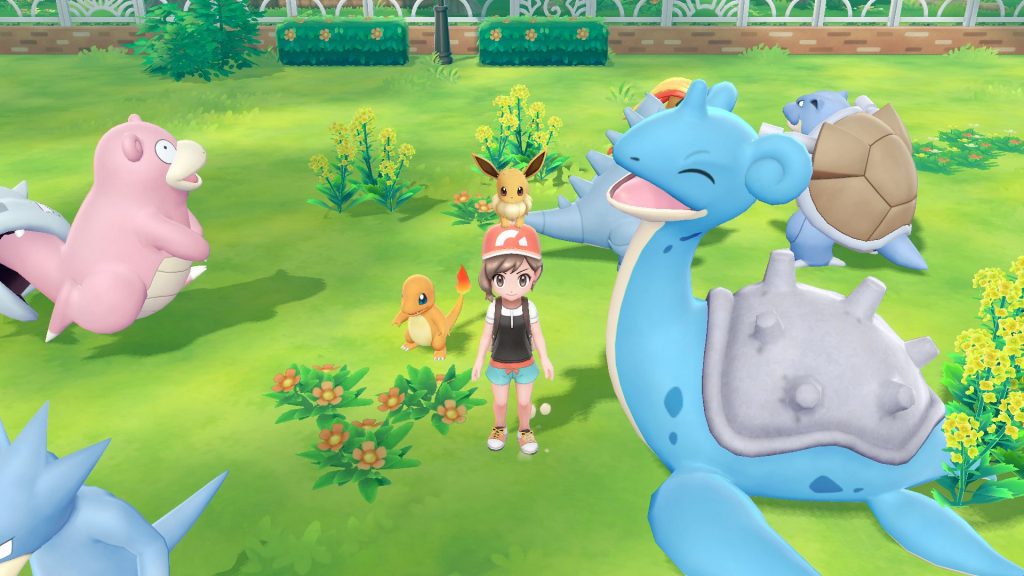 The Safari Zone has been replaced with the GO Park Complex in Pokémon: Let’s Go. © Game Freak

For example, the Safari Zone has been replaced with the GO Park Complex, and the catch mechanic itself feels almost identical to the one found in Pokémon GO. Transferring Pokémon in exchange for Candy has also made its way into Pokémon: Let’s Go, with Candy giving you the opportunity to buff the AVs of your Pokémon.

While random Pokémon encounters in the grass have been retired in favor of visually seeing random Pokémon, the new Catch Combo feature encourages you to get out there and hunt for Pokémon. By catching Pokémon, you can level up the Pokémon in your party. Plus, there are traditional Trainer battles that employ the same strategy of selecting different Pokémon moves and swapping Pokémon based on type advantage. 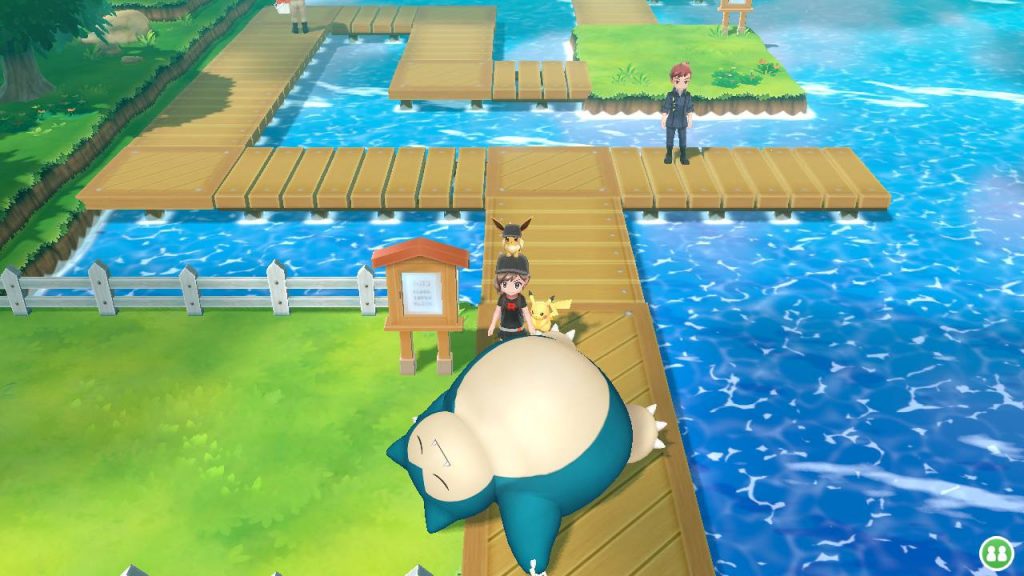 You can ride Snorlax in the style of My Neighbor Totoro in Pokémon: Let’s Go. © Game Freak

Don’t worry, the method of tapping your screen to fight in Pokémon GO isn’t a thing in Pokémon: Let’s Go. Meanwhile, when it comes to recent installments like Ultra Sun and Ultra Moon, the game offers ways to trade your Kanto Pokémon for Alola style Pokémon. There are also little Easter Eggs strewn throughout the game, including how you use the Secret Technique called Sea Skim. If you own a copy of Pokémon: Let’s Go, Pikachu, using Sea Skim may remind you of the adorable Surfin’ Pikachu. Or like how you ride on Snorlax, which looks identical to the way Satsuki and Mei ride on Totoro in the Studio Ghibli film, My Neighbor Totoro.

All in all, Pokémon: Let’s Go may be built on the foundations laid by 90s games like Pokémon Yellow, but it’s very much its own unique, modern game. One with a little something for gamers of any age.