E3 2019 and the Nintendo Invitational showed us extensively what Super Mario Maker 2 can do when players are put to the test on the competitive stage.

With Super Mario Maker 2 launching hot on the heels of June, we have a good idea of what to expect at this point. Our recent preview took a close look at what was new and how much of it was supposed to work. It was cool to get an idea of what was coming, but it was the surprising inclusion of Mario Maker 2 at Nintendo’s E3 World Championships that caught us by surprise and really put the bevy of new features on display through some stunning competition.

Throughout the Super Mario Maker 2 Invitational, we got to watch speedrunners thedragonfeeny, Yellowkillerbee, Abdallah, and The Completionist take on and try to outdo each other at a gauntlet of amazingly made levels crafted in the new system. Grabby hooks, on/off boxes, icicles, and plenty more were on full display. What began as a single player showdown eventually also led to players picking partners and competing with Super Mario Maker 2’s new co-op features to try to be the duo that completed their levels first. Ultimately, it was Abdallah that won out in a fantastic Finals match against The Completionist to claim victory for the entire competition.

We honestly hope that E3’s Super Mario Maker 2 Invitational wasn’t an isolated event because it was awesome. Why? For every bit of the reason you might watch the TV Show American Ninja Warrior. Seeing these players pass or fail each obstacle in a high-pressure situation against one another was a hilarious, dramatic, and astounding viewing experience. When a player failed to pass a point and was relegated back to the start, your heart sank for them. When they dragged themselves across the finish line, it was pure elation. It made us want this to actually become a regular thing.

More than that, it was the perfect way to sell Super Mario Maker 2’s new functions. What better way to showcase how the new tools work and what kind of fresh creativity can be served up in this game then by having good players tackle well-crafted levels in a high-stakes environment? You got to see people that knew Mario like the back of their hand putting their skills to the test against some incredibly varied situations. Whether it ran co-op or solo, it was bigger than just talking about what Super Mario Maker 2 can do ad nauseum. It was a proficient display of skill vs creativity in action. 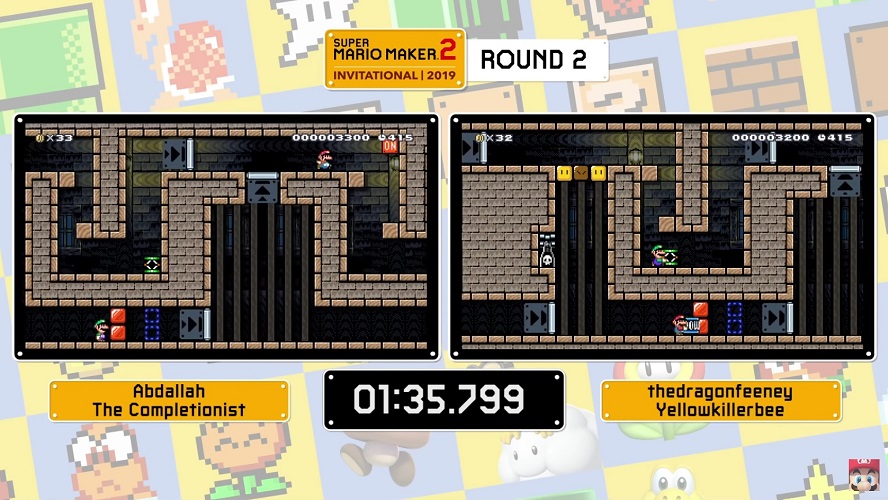 The Super Mario Maker 2 Invitational didn’t just put on a model for single competition. It also showed us duos would be a fun watch as well.

With Super Mario Maker 2’s launch worldwide, anyone who hasn’t seen what this game can do needs to go back and have a good look at the Invitational. Whether you’re someone that wants to see what kind of shenanigans you’ll be playing against on the created stages or a creative that wants to look inside the tool box and get an idea of what the game allows you to put together, there’s a ton to take in from the roughly 40 minute competition. You could easily get an idea of if the game is for you or not. It’s not the end-all-be-all advertisement for Super Mario Maker 2, but it sure does a good job of showing it off from a lot of angles.

And with that, we absolutely put this up as a call-out to Nintendo. Do things like the Super Mario Maker 2 Invitational more. Support this game similarly after launch. Ask for creatives to offer you challenging levels and then pit good speedrunners against one-another. Heck, pit players that aren’t incredibly proficient against one-another and challenge them to be the first to break the gauntlet! Anyone who knows Ninja Warrior also knows that half the fun was watching people fail until that one breakthrough successful contestant. 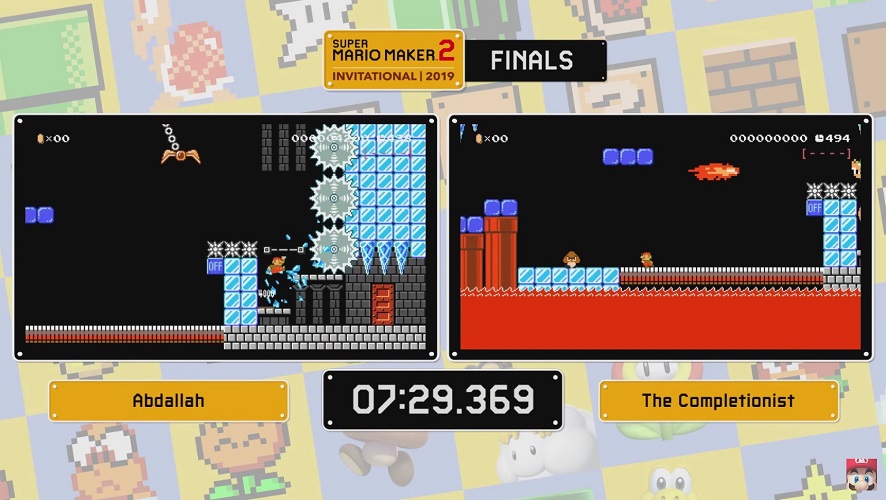 A regular Mario Maker competitive event wouldn’t just be great for competitors. Creatives would also have the opportunity to show off their best work and be put on a grand stage with their level creations.

Even further, the new cooperative play features allow for not just singles competition, but duos competition as well in which teams could participate alongside single runner stars! Who is the best single runner? Which duo works best in sync? That’s the kind of question people would love to see answered no doubt. This is a creative and competitive opportunity just begging to be explored further. Give your enthusiastic community the opportunity to really shine.

We know we’d be watching, and we know we wouldn’t be alone. Otherwise, we’d absolutely hope that someone else picks up the opportunity that the Super Mario Maker 2 Invitational presented and runs wild with it. Super Mario Maker 2 is available on Nintendo Switch on June 28, 2019. Will you be playing or creating? Do you want to see more creative and competitive Invitationals? Let us know!