Creature In The Well Merges Pinball Antics With Adventure Mechanics

The antics of pinball games and hack n’ slash adventure twist together in Creature In The Well to form something quite extraordinary.

If you ever thought that games like pinball could use some hack n’ slash RPG adventuring to spice things up or that RPGs could use more balls ricocheting off of targets instead of monster mob murder and experience grind, then Creature in the Well may have been made for you. That said, nobody should sleep on the game even if that strange set of expectations never came to your mind. This is a quirky adventure built upon mechanics that remind us of ball bouncing games of yesteryear like Arkanoid and Breakout, but there’s a lot of context, artistry, and narrative to the whole thing that not only includes the strange pinball mechanic, but makes it feel like a natural part of the world.

Saving Mirage From The Creature 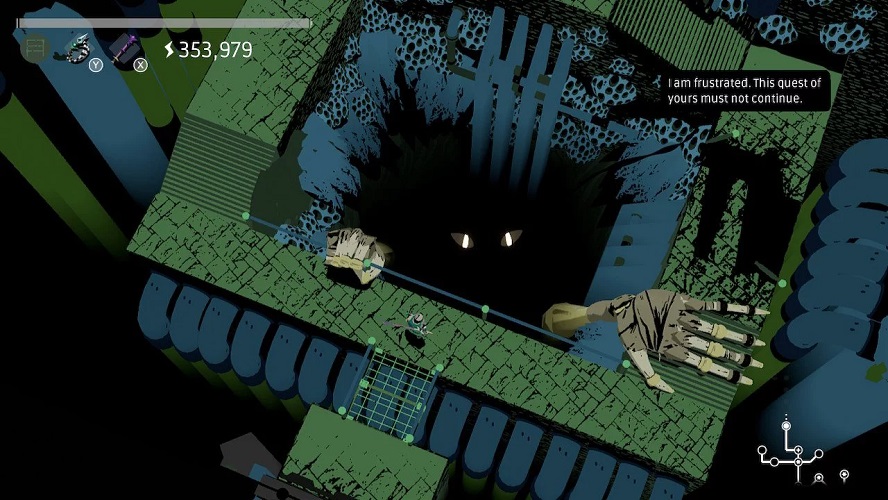 The titular creature in Creature in the Well is your constant foe throughout the game, adamantly seeking to stop you from saving Mirage.

Creature in the Well takes place in a city of Mirage which has fallen under some hard times. A sandstorm rages around the city and threatens to bury it entirely, and the only thing that can save the city is a curious weather machine facility at its heart. You take on the role of a lonely BOT-C unit tasked with restoring power to the facility, but it’s nowhere near a simple task. In the facility’s depths lurks a being who has no interest in allowing the sandstorm to stop and the machine to run. It has sabotaged the facility and turned it into a dizzying array of puzzles and traps.

Fortunately for us, BOT-C quickly gains the tools to overcome the facility’s every corridor. With a unique sword in hand, BOT-C can bat balls of power around areas of the facility at targets which grant the robot energy to restore functionality to the facility, as well as discovering and/or upgrading gear to open the paths forward. Along the way, you are helped by the remaining citizens of Mirage, who help your mechanical pal save the city. The Creature is oppressive in its attempts to stop you and its dreary presence hides in every deep hole, creating a tension of whether or not it will interfere and endanger you or others as you move forward.

Pinball Adventure? How Does That Work? 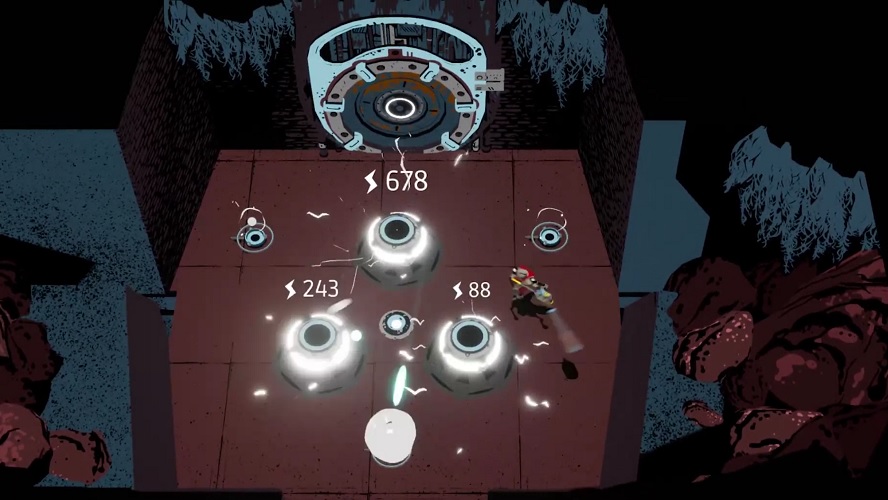 Rather than normal hack n’ slash battles, Creature in the Well tasks players with solving and surviving various puzzles to restore power to the dead facility in Mirage.

At its fundamentals, Creature in the Well carries all the structure of an RPG like Diablo. You gain weapons and clothing as you go that give you useful abilities, all while leveling yourself up and opening the way forward with each step deeper and deeper into the Mirage facility. There are quite a few ‘dungeons’ in the facility, each with their colorful own style and aesthetic. Where it gets wild is when it’s time for action.

You see Creature in the Well doesn’t really have traditional monsters or outside the titular creature. Instead, rooms carry targets that you must bounce a ball of energy back and forth against in order to gather power and complete any number of puzzles to access the next area. Sometimes you need to hit all the targets with speed or accuracy. Sometimes you need to hit them in a particular order. Either way, it becomes more and more complicated as various traps and pitfalls interlaced into the puzzles by the creature threaten to cut your adventure short if you can’t solve the puzzles while avoiding them. Energy turrets, security fields, and more make later puzzles far more dangerous.

The Tools To Fight The Creature In The Well 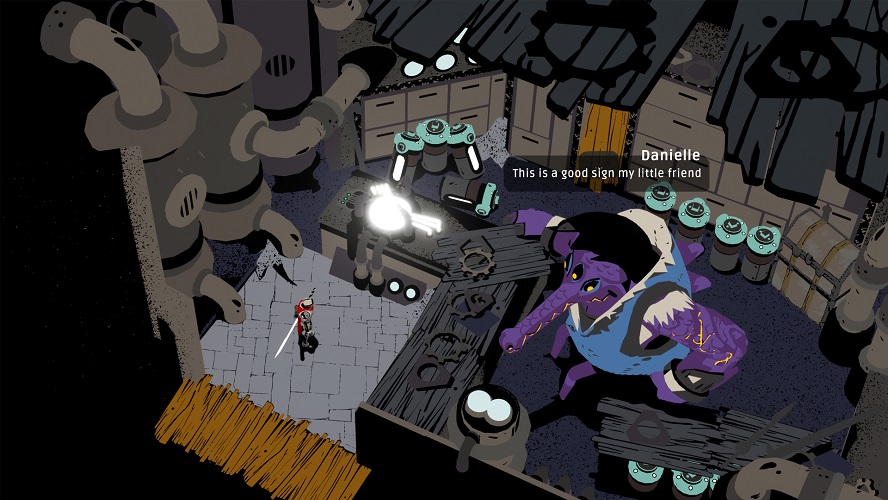 You’re not alone in your journey to stop the creature. Characters like the blacksmith Danielle will boost your equipment, give you info, and help you along your way.

The Creature in the Well doesn’t hold all the cards. Those who remember playing Arkanoid or Breakout may remember any number of power-ups that gave the player special abilities like a longer paddle or magnetism to catch the ball and fire it off at your leisure again. Creature in the Well has this too. As you go through the game, you’ll find interesting new weapons with special abilities. You can catch the balls of energy and fire off more balls in turn at once to hit multiple targets in quick fashion with one while another will show you the trajectory to which the balls of energy will fly, taking out some of the guesswork.

As mentioned above, not only are there means to gain more power in the facility and, but there are a few friends to help you along the way. One of the characters will allow you to upgrade your tools and gear to help you in your journey. Meanwhile, another whose family designed the weather machine shares useful information with you in hopes of helping you understand what’s happening. It’s a game that allows you to use and upgrades the tool you like most to best tackle the challenges of the creature your way.

Flight School Studio crafted a very oddball thing. Creature in the Well not only crafts a rather unsettling mood with the presence of the creature in this suffering facility and city, but it also brings two very different gaming ideas together in a very feasible way. It’s hard to say we would have ever thought to put together a pinball-like game together with RPG progression in such a way, but Creature in the Well doesn’t seem to give much up to merge the concepts faithfully either. If you want to learn more, you can check it out on Steam. Creature in the Well launched September 6, 2019 on Nintendo Switch, Xbox One, and PC. 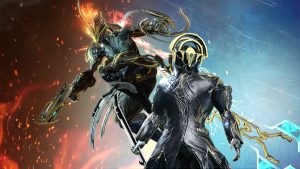 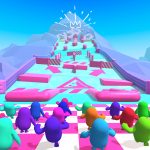