We spoke to Director Nobuya Nakazato on exploring new opportunities with the beloved Contra franchise in the upcoming Rogue Corps. 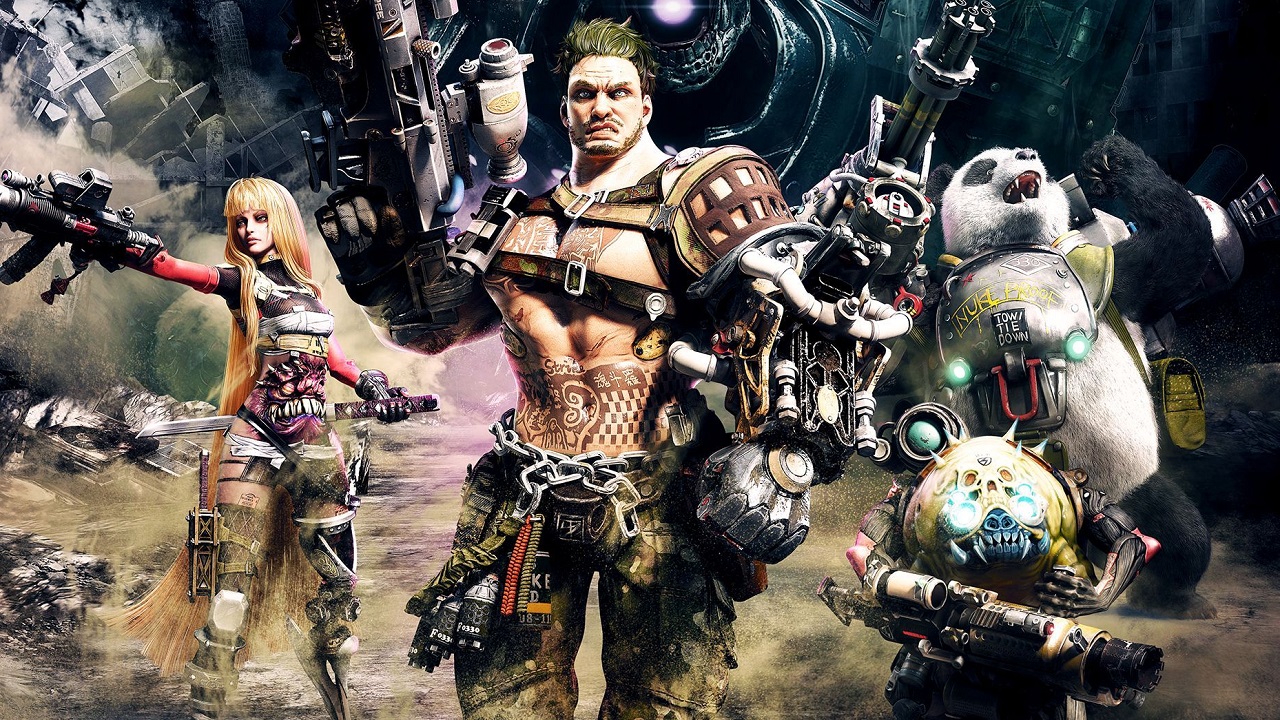 Contra is one of the cornerstone foundations of all run n’ gun gaming. If you had an NES in the late ‘80s or early ‘90s, then there’s a good chance you were blasting through aliens with friends and a spread shot and machine gun or two to go with it. So many years later, Konami continues to return to their franchise with Contra: Rogue Corps and series veteran Nobuya Nakazato is doing things with the game that has seldom been done in the franchise. That said, even if the look of Rogue Corps is out of the ordinary, the heart and soul of running and gunning with friends is bigger and better than ever in the new game.

We played Rogue Corps at Gamescom 2019 and then had a chance to talk with the man himself, Mr. Nakazato, in an interview about the new directions of Rogue Corps.

An Adapting View For All of The Action

Sequences like special abilities give us a dramatic view of the action – just one of many interesting camera angles in Contra: Rogue Corps. [Image by Konami]

One of the first things players will probably notice when they jump into Rogue Corps is the more top-down angle to the action. While it may be alarming to people who have side-scrolling Contra engrained in their vision of the game, there’s a lot of good reason to do Rogue Corps from new angles. For one, it can be done well with the right considerations, and for another, it helps in making sense of the battlefield as Nakazato points out.

“With modern hardware, there’s a lot we can do with the game and we’ve never done before,” he explained. “In the past houses depending on what kind of stage you were in, we had to limit what kind of camera angles we could implement in one mission, but with this one, we want to make sure that in one level you can experience different types of camera angles. Now that we added more playable characters of the game and you can play up to four-player simultaneously, we wanted to make sure that the view didn’t make your characters look so small that it’s hard to tell what’s going on with your team and surroundings.”

Even with all of the updates and experimentation with perspective, Nakazato hasn’t left classic views completely aside.

“In online multiplayer, the camera focuses more fully on the player’s character,” Nakazato further explained. “So there are parts of missions where we move the camera around and you get that sort of 2D classic perspective.”

Indeed, as we played in the multiplayer demonstration, the camera moved a lot depending on where we were in the mission. At some sections, it gave us an arena-like view of the area and enemies we were fighting with, but at others, it either gave us the complete top-down or following-from-the-back view that certain missions in early Contra had. At all points, even with four players and a lot of enemies on screen, it was never hard to understand what was happening in our session. 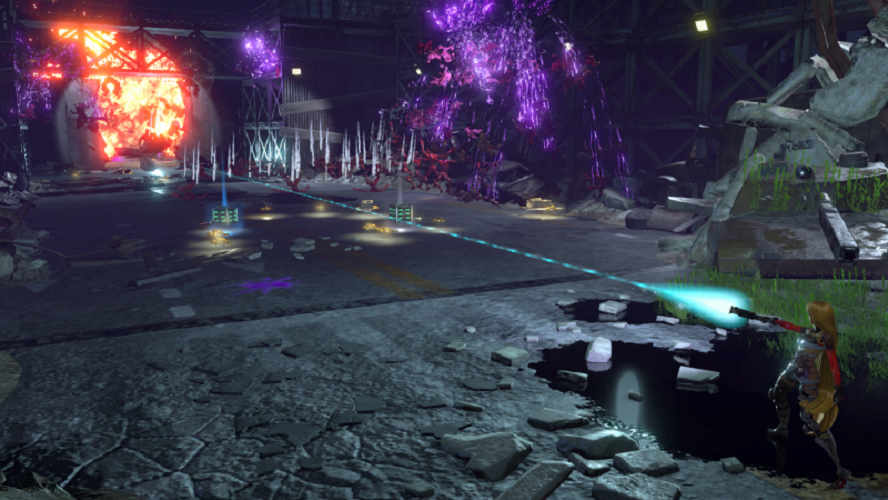 Rogue Corps has a weapon for almost every occasion or want, such as the long-range laser beam below. [Image by Konami]

One of the other more noticeable additions to Contra Rogue Corps is the vastly expanded arsenal. Standards like machine guns, spread guns, lasers, and fire launchers return, but they are joined by a massive amount of new weapons you can collect and keep in a growing inventory accessible between missions as you go through the game.

Each character can carry two weapons and each weapon can be used only so much before it overheats and goes on cooldown, so it’s good to pick and choose weapons that make complement each other to make sure you’re always on the offensive. According to Nakazato, it’s all about showing off what your arsenal can do with friends.

“One of our goals with this game that you go all crazy with your guns,” Nakasato stressed. “One of the things we wanted to implement was being able to customize your weapons so that you can basically show off your playstyle. It’s all about showing your fellow players ‘hey, look at this crazy gun that I made.’ And so it really allows players to make up their gameplay as they go and be very different based what guns work best for them.”

The weapon combos we played around with were vastly different experiences. When we started, we had a simple Gatling gun for standard rapid-fire and a rocket launcher with homing missiles. It was a very easy to use a combo that didn’t require much thought. Then we played around and made a set that fired a four-way laser across the battlefield and a fire gun that instead of firing fireballs out, would be activated and start leaving a trail of fire behind us as we moved, burning enemies that crossed through. There were also weapons the fired drills up from the ground, deployed massive chainsaws, set explosive triplines, and much more. As you amass your arsenal and options, your playstyle is almost entirely up to your imagination in Rogue Corps.

Sounds of Contras Gone By 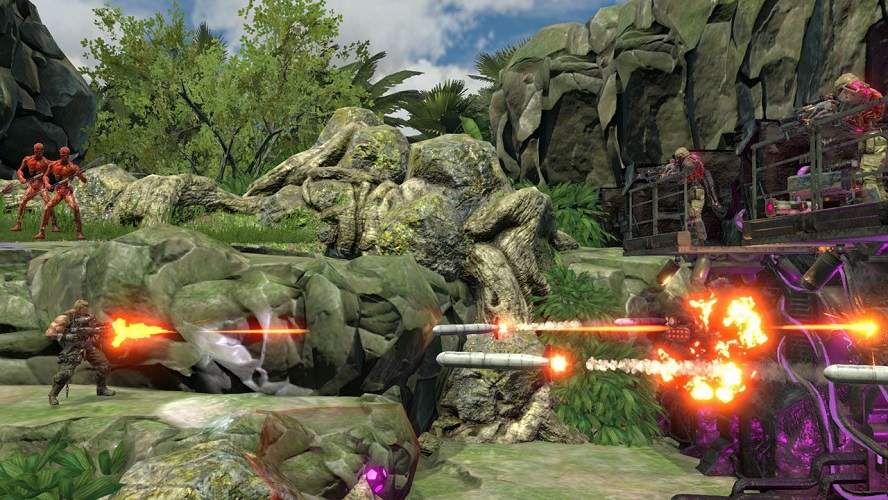 Contra: Rogue Corps isn’t going to be without its share of throwbacks, but it’s all apart of doing everything they can and want to with the new game for new players and old fans alike. [Image by Konami]

Let’s face it: Contra music is some of the most iconic in video games. Even as you’re reading this, you’re probably humming the level 1 Contra jungle theme. So, of course, we needed to know what kind of soundtrack we can expect in Rogue Corps. The demo’s music was a little sparse, but Nakazato knows the riffs of a good soundtrack are just as much a part of a good Contra game as anything.

“We definitely have a mix of older familiar soundtracks as well as new music for the game,” Nakazato revealed. “The ratio is probably a two to one of homage to the older songs as well as adding in a bit of new music. The music where you’re fighting off waves of minions and grunts is a little less present, but once you get into boss fights and certain special segments of missions, that’s when you hear a lot of the crazier music where we had more fun with the soundtrack.”

During the trailer when the characters completed the objective, we definitely heard the classic Contra level complete stinger, so we have faith that Nakazato and his team are bringing us some aural goodies both brand new and remixed classic when it comes to Rogue Corps.

When it comes down to the bottom line, we had fun with Contra: Rogue Corps in our short time with it. The mix of drop-in, drop-out online multiplayer and couch co-op running gunning feels great in the game. The arsenal feels absolutely awesome as well. As much as features like regularly shifting camera angles add new wrinkles, good multiplayer action still remains as the beating heart of Contra: Rogue Corps. 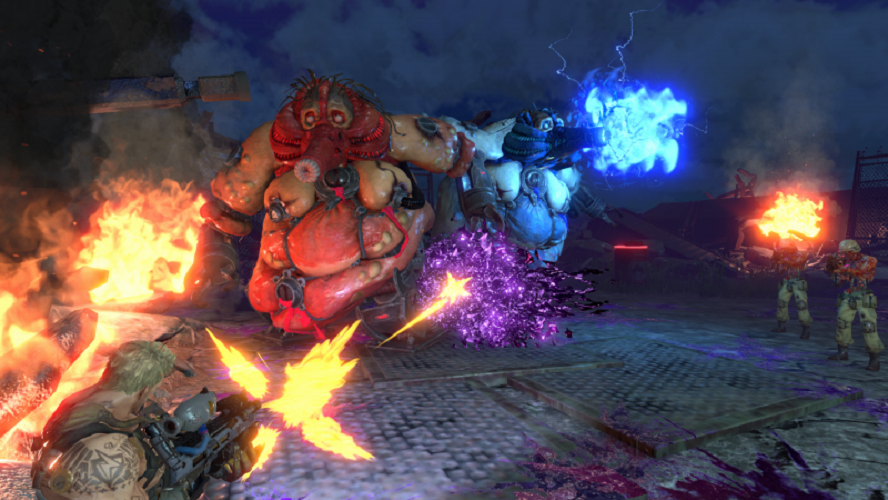 Big ugly monsters are going to need every bullet, missile, laser, and fire shot you have available to give them. So yeah, it’s Contra the way we know and loves it. [Image by Konami]

As a final aside, we had to ask Mr. Nakazato the most important question about Rogue Corps. Will the Konami code work? Unfortunately, it seems we stumbled across a company secret.

“I don’t know how you found out about that, but you’ll just have to try it out when you play the game,” Nakazato told us with a laugh.

Rogue Corps may look different, but the series is still in perfectly good hands with a director that knows their way around a spread gun. We look forward to seeing everything that Contra: Rogue Corps has for us on September 24, 2019, the game’s official release date when it launches worldwide.