Call of Duty: WWII is hitting our gaming consoles and PCs on November 3, but not before Activision gives us all sorts of juicy morsels to tide us over until its release. At this year’s gamescom, Call of Duty: WWII had a whole lot to show off, and we just cannot get enough!

Call of Duty: WWII has taken a page out of Destiny’s book and will be including, for the first time, a dedicated social space. In this area, players can practice their weapon skills at the firing range, challenge other players to 1v1s in the Pit, watch eSports matches live from the Theater, and even jump behind the helm of an AA gun to take down planes and earn rewards.

This seems like it will be the perfect mid-match chill out area where you can gather your thoughts and wait for your friends to get online, all while testing out new gear.

In the video below, IGN gives us a look at many of the weapons coming to Call of Duty: WWII. Included in this list are a lot of fan favorites like the M1 Garand, the M1911, Tommy Gun, and even the German Luger. After years of modern, and even sci-fi, settings, it’s going to be a shock to the system to use these old-school weapons. In saying that, we can’t wait to hear the iconic ping of the M1 Garand.

Anyone who’s been around the Call of Duty eSports scene will know the importance of Hardpoint. OpTic Gaming have become known as one of the deadliest eSports teams when it comes to Hardpoint, so it’s exciting to see this gametype continue on into the second World War setting. In this gameplay we get to see a few interesting mechanics, specifically a detachable suppressor to help keep your position a secret when shooting!

We also got a chance to look at the Team Deathmatch in Call of Duty: WWII. It’s good to see that classic deathmatch is returning to Call of Duty, it wouldn’t be a CoD game without it!

Domination got a showcase on the Pointe du Hoc map, making it another returning fan-favorite gamemode. In it we see the player using an STG44 among many other SMGs as well as a sniper. It’s looking as if there will be dozens upon dozens of guns to unlock, collect, and customize in Call of Duty: WWII.

Last, but certainly not least, Call of Duty: WWII is introducing War Mode, a new multiplayer gamemode that heavily focuses on objective-based gameplay. Anyone who’s playing Battlefield’s Rush mode will recognize this style of play.

In War Mode, it’s one team versus another, in a classic attackers-versus-defenders scenario. The defenders need to build walls and protection in what feels like a mechanic inspired by Call of Duty Zombies. The attackers, meanwhile, partake in what feels like a very Overwatch Payload situation where they need to push a tank through the streets, building bridges and tearing down the enemies’ defences.

War Mode is an intense, pulse-pounding experience where you fight tooth and nail in a tug-of-war situation. You will either need to push into the enemy base with your tank or try and build up your defences to keep your foes at bay.

Call of Duty: WWII is coming November 3, but the PS4 Beta starts on Friday, August 25, with the Xbox One Beta beginning Friday, September 1. We’re getting ourselves ready to dive into the beta and sink our teeth into what is shaping up to be a truly incredibly Call of Duty experience! 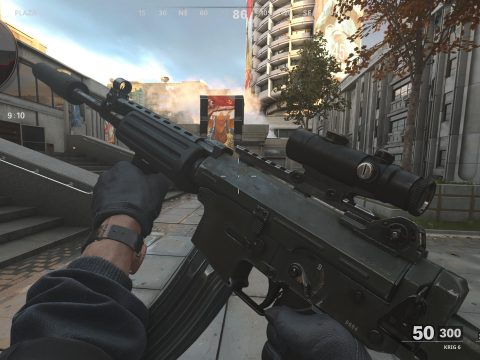