Call of Duty: Warzone Battles Cheaters In A Unique Way

The Battle Royale genre got a massive new competitor when Call of Duty: Warzone entered the fray earlier this year and captivated the video game community with its exciting gameplay and free-to-play nature. Unfortunately, as with many online multiplayer games, cheaters soon began to infect lobbies and make the lives of rule-abiding players miserable. The cheaters accomplished this by using a variety of cheats that would, for example, make them invincible, see enemies through walls, or never miss a shot no matter how far away they were. This extreme influx of cheaters onto the battlefields of Call of Duty: Warzone led Infinity Ward to ban over 70,000 accounts. Unfortunately, the free-to-play nature of the Battle Royale allows for these cheaters to come back and keep frustrating players who are just trying to have a good time playing the game the right way.

Infinity Ward went on to reveal a very unique way that it would be using to combat cheaters in Call of Duty: Warzone, which consists of using the game’s matchmaking to put suspected cheaters together and away from players following the rules. This new method for combating cheaters caught the attention of the community, as no one was expecting to see a solution be presented that would give the cheaters a taste of their own medicine. Plenty of jokes were had to where people lamented about how they would actually enjoy seeing a bunch of cheaters using their cheats against each other in a match with the winner getting the reward of being banned.

However, some high-skilled players have run into problems with this new matchmaking update. It deems their stats to be those of someone who could possibly be cheating when, in reality, they are not, which results in them being matched with legitimate cheaters and back at square one when it comes to getting away from playing with these kinds of players.

In addition to the matchmaking that does its best to match cheaters with each other, Call of Duty: Warzone received dedicated security updates, increased resources across backend tech, studio, and enforcement teams. Infinity Ward will also be adding a player report feature that you will be able to use from the killcam and spectator screens. Players who report a suspected cheater will get an in-game confirmation if the particular player is found to have cheated and is successfully banned. 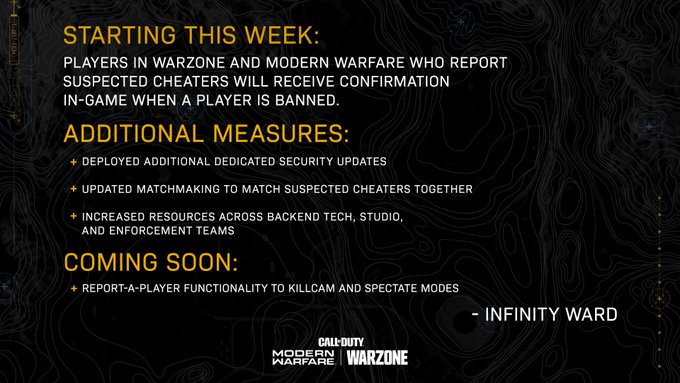 Call of Duty: Warzone update including anti-cheater and anti-hacker measures

Now, you may think that matching suspected cheaters against each other is one of the odder ways that a game developer has tried to combat cheating in their online game. However, it is actually not the first first-person shooter to use this strategy to punish those who cheat. Respawn Entertainment employed a similar cheater purgatory in Titanfall. It put suspected cheaters into the same lobbies as each other, where they were forced to fight against the unfair hacks of other cheaters and had no way of escaping and ruining the fun of rule-abiding players.

Rockstar Games also had an inventive way of punishing players who took what were only supposed to be single-player weapons and vehicles into Grand Theft Auto Online to gain an unfair advantage over other players. Players who were discovered to be guilty of cheating in this manner would see Rockstar Games make their vehicles explode. This sent them a loud and clear message to the cheaters that Rockstar Games knew what was going on and that they were going to fight back with fire. 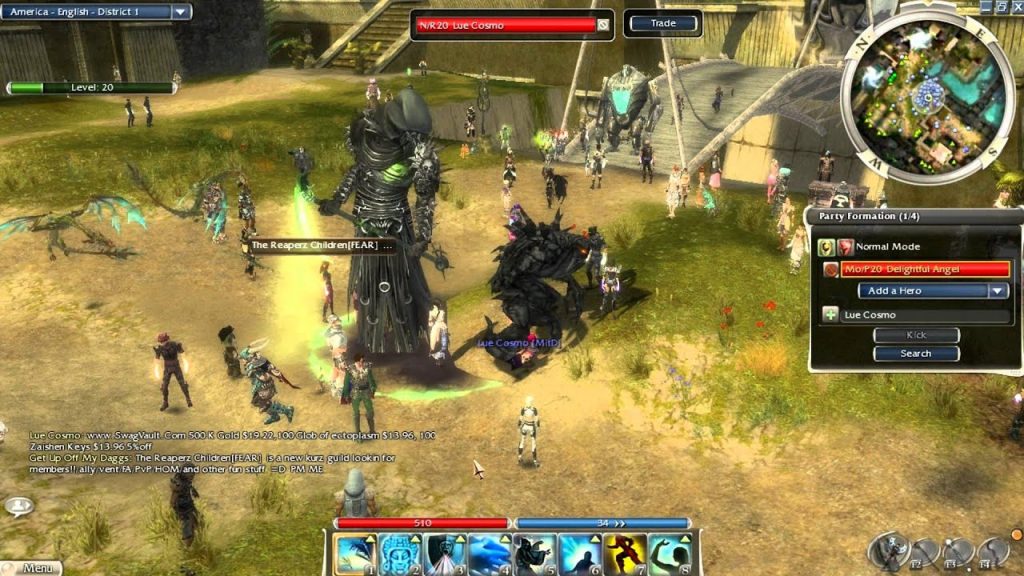 Guild War’s Dhuum appears to claim the soul (account?) of a cheating player.

ArenaNet is another developer who came up with an exciting way to show cheaters that they are not welcome on their game’s servers. Players who were found to be cheating in Guild Wars would be visited by the game’s version of the Grim Reaper. This beacon of death would then literally slice the cheater’s character in half in front of every other player around them, sending a clear message that a cheater had been dealt with swiftly and mercilessly. It does not get more embarrassing than having it declared to a group of players that you were banned for cheating by getting sliced in half by a giant scythe.

Cheating in online games will, unfortunately, always be around. Still, developers have found smart and unique ways to fight back against players who do their best to ruin the fun for everyone else and gain an unfair advantage through methods that you were not expecting to see happen but are glad did.