The Modern Warfare Beta may have come to an end, but most of us were left absolutely stunned and ready for the full experience in October.

The Call of Duty: Modern Warfare Open Beta turned more than a few players into believers in the two weekends it went on. During the Beta period, players were treated to a limited multiplayer taste of the game, but that taste included a look at the progression system, much of the arsenal, plenty of maps, modes and game variants, and the first look at cross-platform play. It wasn’t perfect (no Beta usually is), but what we saw was more than enough to raise our hopes and get us excited for its full release in October.

The weight and impact of the gameplay in the Call of Duty Modern Warfare Beta was a definite highlight of the experience.

Many remember the original Call of Duty 4: Modern Warfare as one of the grand highlights of the entire series. It reinvigorated the franchise and set it up to stand the test of time year after year. 2019’s Modern Warfare promised to deliver everything that made us fall in love in the first place and more.

Going into the Beta, we felt the love poured into even the basics of the game. Movement in the Call of Duty Modern Warfare Open Beta was heavy, plodding, and methodical. The game still moves fast, but the weight of the world just helps to build the impact of every engagement. Every bullet landing feels thick and impactful and every opponent defeated feels like far more than a cheap tally. In short, the weighty gameplay makes it feel more visceral and adrenaline-pumping than a Call of Duty game has felt in years.

The weapons have amazing variety too. Starting with the likes of the M4A1 and MP5 makes for a great baseline that you could simply use all the way to Level 50 if you wanted to, but unlocks like the quick-striking MP7 submachine gun, the close-quarters monster 725 shotgun, and the hard-hitting ODEN assault rifle brought wonderful wrinkles to our combat capabilities. Each gun had a fair share of strengths and weaknesses, and it was genuinely enjoyable figuring out which one fit us best in this iteration.

Changes For The Better In Modern Warfare

Grazna Raid is a perfect example of the variety CODMW is bringing to its new map designs.

It wasn’t all nods to the past and nostalgia in the Modern Warfare Open Beta. Some drastic changes have come to the way the maps are approached. Gone are the days of the three-lane map in favor of a much more varied and broken up terrain. This does the game a great service when it comes to strategic movement. There are still areas and chokepoints built to funnel players into engagement, but the broken structure of the areas really allowed for far more sporadic pathing when it came to where players would find each other and who had the advantage.

Take Grazna Raid for instance. This town fight puts a chokepoint at the center of a series of broken housing and an overhang which is isolates the innards of the buildings around the alley from the combat taking place in the tight space. Outside of that, there is a valley cut with ditches and trenches and covered in wooden crates of supplies, and then there’s an open street next to a children’s park and mansion. Set on each end is a series of back alleys, factories, garages, and more that allow for flanking and or coverage to deploy killstreaks. The whole map has so much variety to it. We definitely had more than our fair share of encounters at specific spots, but the battle never felt completely confined to one part or another.

Smoothing Bumps In The Road

32 players is a lot of players to have talking at the same time. Call of Duty Modern Warfare needs a party system to aid in crossplay communication.

No Beta is really ever perfect and Call of Duty Modern Warfare’s, while great, wasn’t without problems. It’s a fact Infinity Ward assuredly recognizes, having posted what their priority fixes are in a recent Reddit thread based on feedback from the community. Much of it is bug fixes and going after the obvious like being able to shoot through open railings and PC players being able to communicate with console players. As good as the game was, Infinity Ward has their work cut out for them, they know it, and there’s no doubt they’ll go after it head-on.

Even so, we know what we want to see, and it doesn’t appear on that list. Call of Duty Modern Warfare needs a cross-platform party system.  It’s great that we can all play together whether we’re on PS4, PC, or Xbox One, but not so great when it comes to communication. There are things each of these platforms can do, such as Xbox and PS4 parties or Discord on PC, but having to go outside the game to third party programs isn’t a great solution for crossplay. Otherwise if you want to talk to your cross-platform teammates in game, you have to weather whatever fracas is going on in the general lobby. An in-game party system that allows you to have a line of communication with your friends regardless of what platform they were on would be an excellent addition to crossplay in Modern Warfare.

Despite the few complaints, everyone seemed to have had a good time and it’s easy to see 2019’s Call of Duty Modern Warfare is on the right track to being one of the best competitive games in years. The game is set to launch on October 25, 2019 on PlayStation 4, Xbox One, and PC, and a new Call of Duty competitive system similar to Overwatch League is coming soon after. A little polish here and some tightening for the screws there and Call of Duty Modern Warfare is looking like it’s set to have a bright 2020. 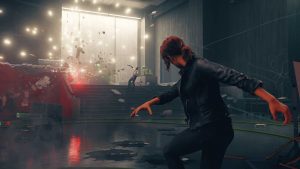