The original Warhammer 40K: Space Marine game from THQ was a pretty by the numbers affair, but it’s still remembered fondly as a decent enough third-person action game for fans of the Warhammer 40K community. It did what few other games have done, and gave fans a chance to experience the power fantasy that comes from playing as a superhuman Space Marine. It even had a semi-decent grip on the Warhammer 40,000 universe, and some alright hack-and-slash gameplay when you wasn’t mowing down hoards of Orks with a bolter.  If anything, it was let down by relatively linear levels, somewhat dull environments, and a fairly uninspired storyline.

Hopefully Saber Interactive (World War Z, The Evil Dead Game) can take its long-overdue sequel in a bold new direction that once again gives players the same thrill of adorning the Space Marine armor and obliterating Tyranids in the new Space Marine game. For everything we know so far about this next outing, read on.

All the latest news and updates on Space Marine 2 can be found just below in the dropdowns. Be sure to bookmark this page to keep up to speed on the latest goings-on.

PCgamer were lucky enough to line up Saber Interactive, the studio developing Space Marine 2, for an interview during this year’s PC Gaming Show.

“In this particular game the tyranids are the main focus,” said Saber’s creative director Oliver Hollis-Leick, “and what makes them compelling is that they are extragalactic locust-like creatures, they’ve come in from goodness knows where, they spread like wildfire, they devour everything in their path, and they leave nothing in their wake.”

“One of the great things about the tyranids is they come in the thousands,” said Willits, “and our proprietary engine, the Saber Swarm Engine, can deliver these epic battles. Just like our previous game World War Z where we had hundreds of zombies, now we will have thousands of tyranids, and you will rip and tear through them all.”

You can watch the full interview on the link. 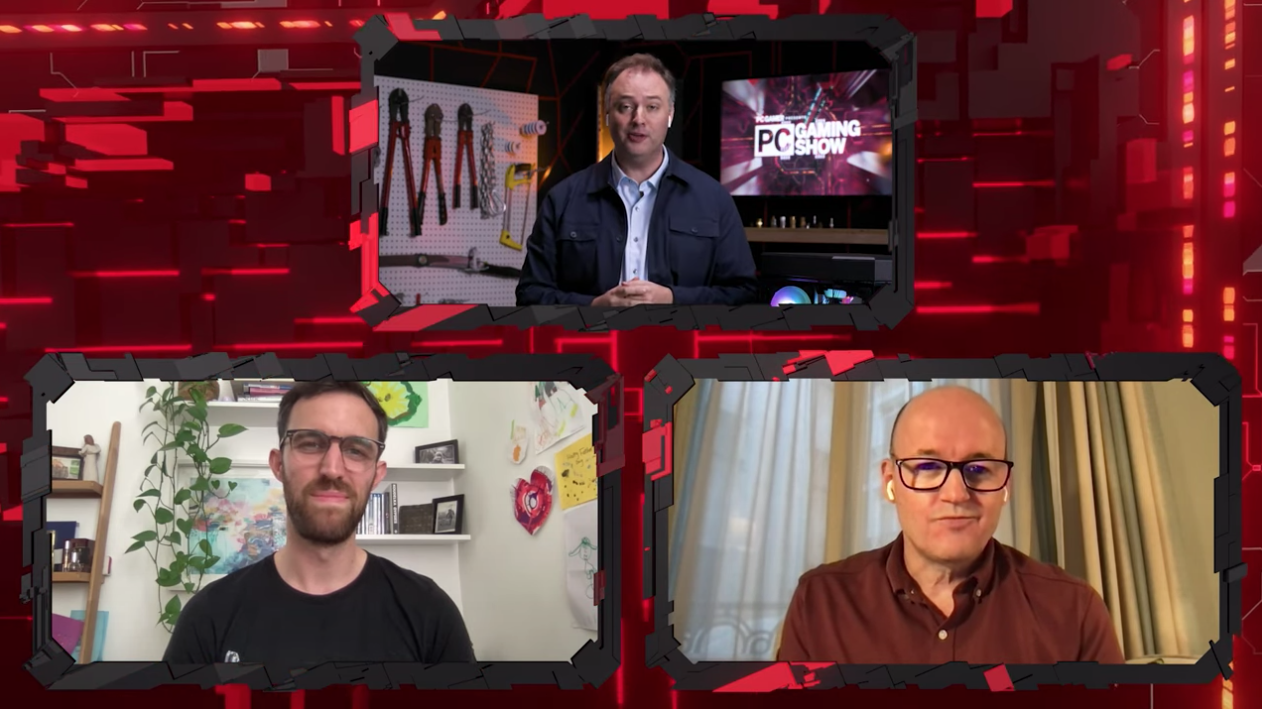 So the Warhammer Skulls showcase gave fans a tiny snippet of new content in a short developer trailer called ‘Foundations of War‘.

The trailer in question mainly focusses on a series of talking heads with the development team, telling us how much passion they’re putting into the project.

The trailer is light on new details, buttttt there is a few blink and you’ll miss it new shots which we haven’t seen before. Including a look at some Ultramarines Thunderhawk Gunships and some giant Ultramarine statue. you can see all three of these new shots, just below: 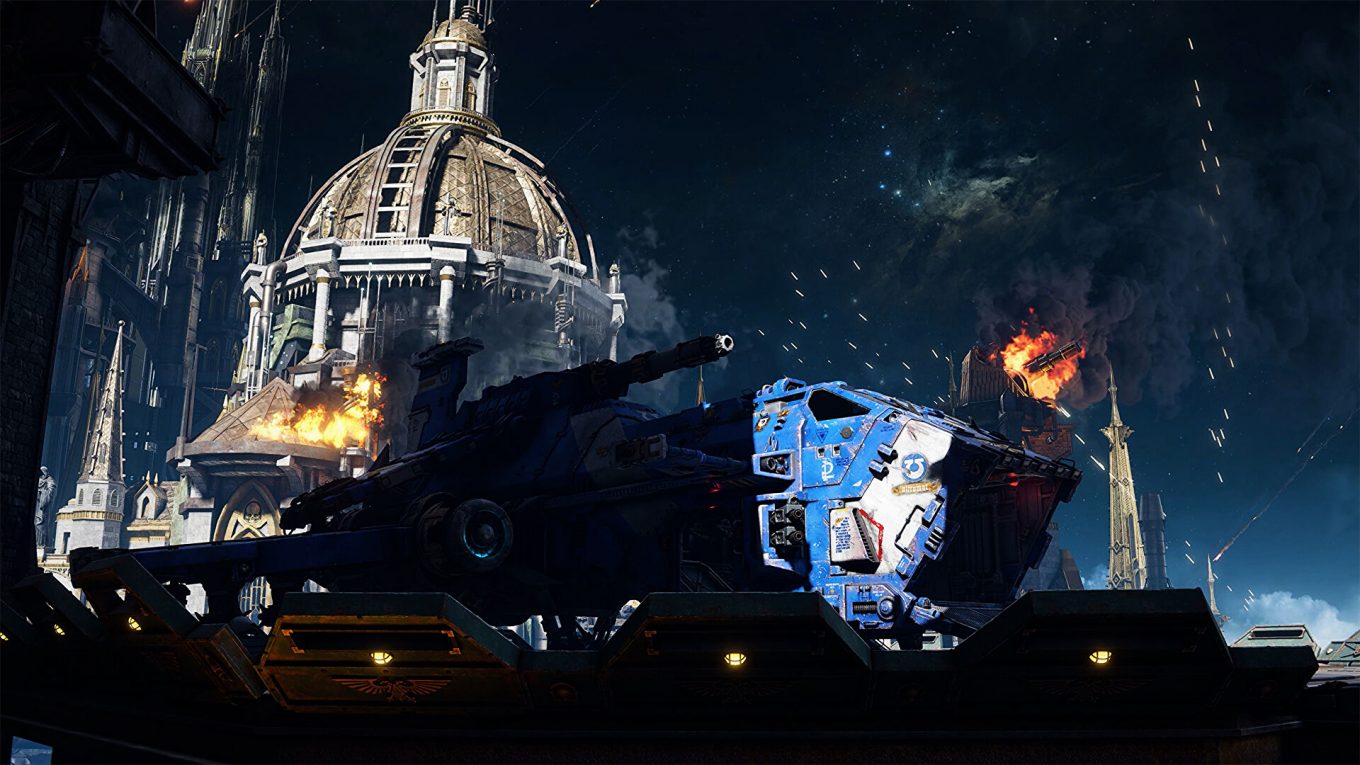 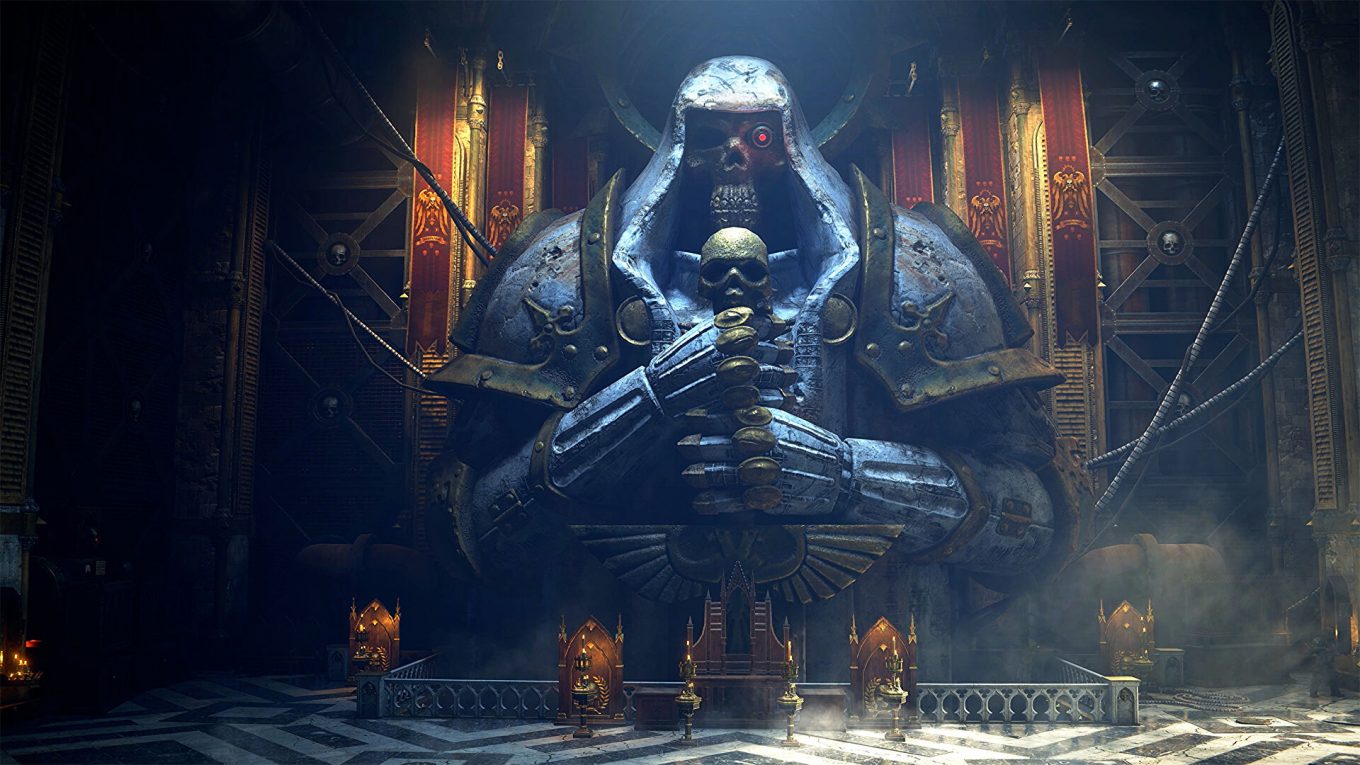 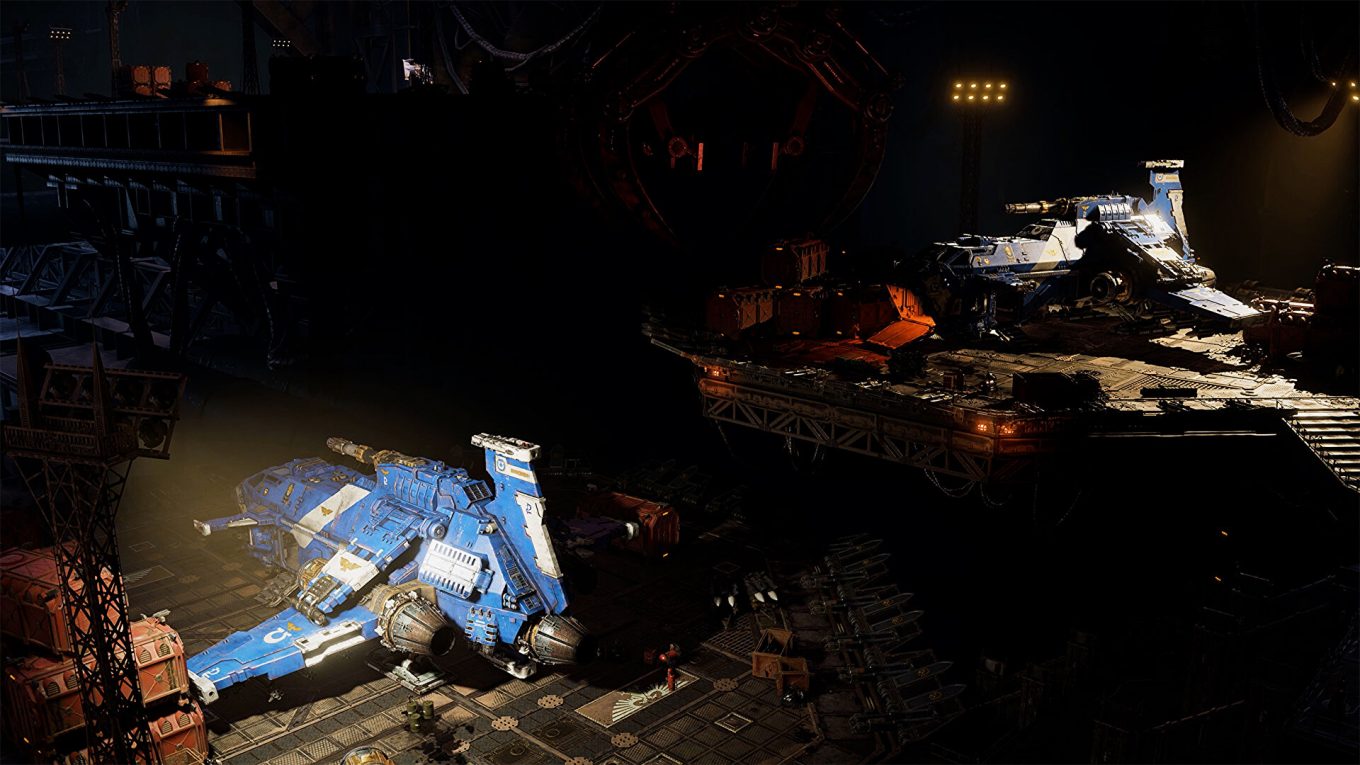 Games Workshop is holding a special Warhammer Skulls showcase on June 1 and we should get some more info and hopefully a deeper look at Warhammer 40,000: Space Marine 2. It’s also going to be introduced by Clive Standen (Vikings and Taken), who as some might know, is lending his voice to Space Marine 2 as Captain Titus. It certainly seems like we could get a meaty reveal for the game, so make sure you tune in on  the Warhammer Twitch channel at 6pm on Wednesday the 1st of June. 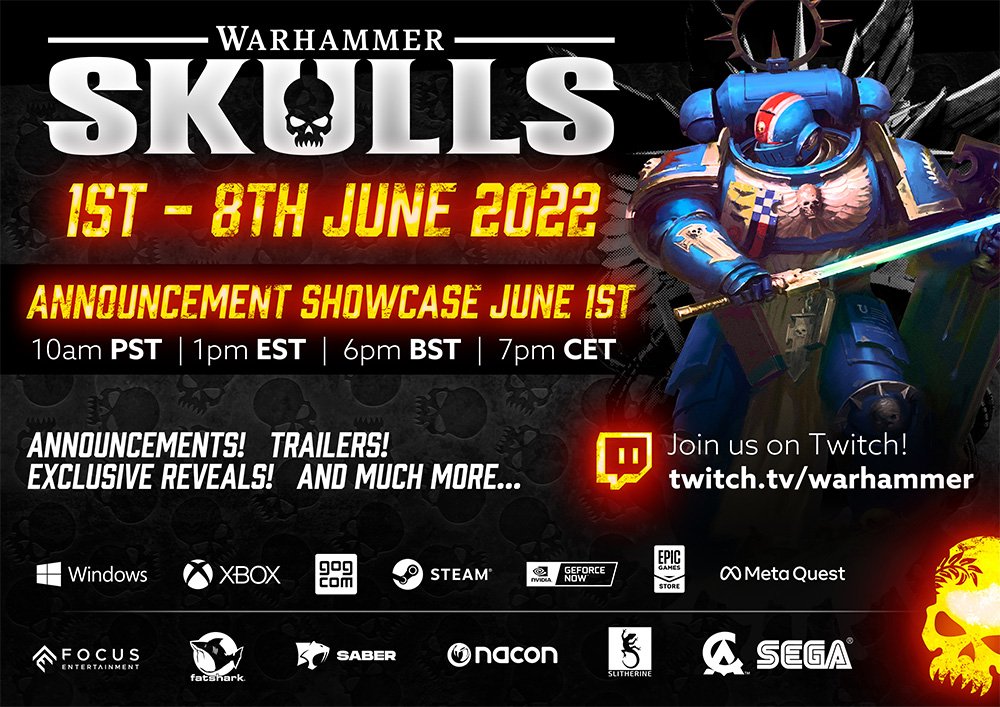 Warhammer 40K Space Marine 2: What Is The Release Date?

So whilst we might hope to see Warhammer Space Marine 2 releasing in 2022, it’s more likely that we see the game launching in 2023 depending on how long the game has already been in development.

What Platforms Will Warhammer Space Marine 2 Release On?

The developers have confirmed that Warhammer Space Marine 2 is set to launch on PS5, Xbox Series X, Xbox Series S and PC.

So far there’s been no mention of PS4, Xbox One or Nintendo Switch, which suggests the game may be exclusively for next-gen platforms.

The only trailer released for Warhammer 40,000: Space Marines 2 so far is the one above, which premiered at the 2021 Game Awards.

The trailer showed the might of the Adeptus Astartes fighting against the monstrous threat of the Tyranids. It starts by showing a group of Imperial Guardsmen cut down by some rampaging Hormagaunts, only to be pushed back by the Ultramarine Captain Titus who saves the day.

For now, this is just a cinematic trailer, but with any luck, we’ll get to see more of the game in the near future.

Although they didn’t reveal any gameplay during the initial trailer for the game, it does seem as though a small slither of gameplay was shown on the Warhammer website.

A small slice of gameplay was added halfway through an interview with two developers from Saber Interactive who are working on the game. You can take a look at this gameplay just below:

Whilst we’d recommend fans of the game take a look at the full interview available on warhammer-community.com, we’ve picked out a few of our favourite lines from the Q&A which seem particularly important: 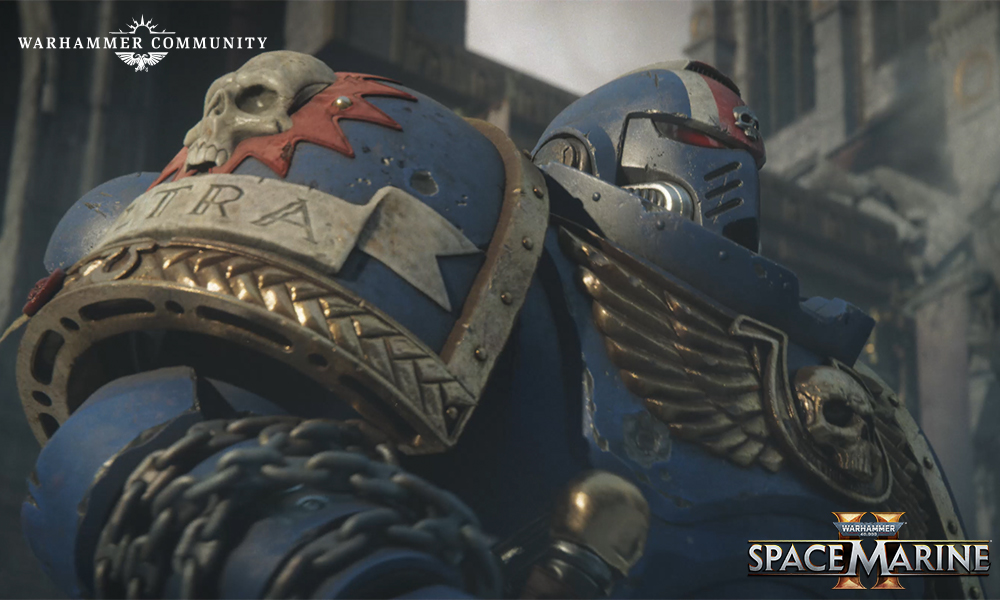 That’s everything you need to know about the new Warhammer 40k Space Marine game, but stay tuned to Turtle Beach for more updates and leaks.