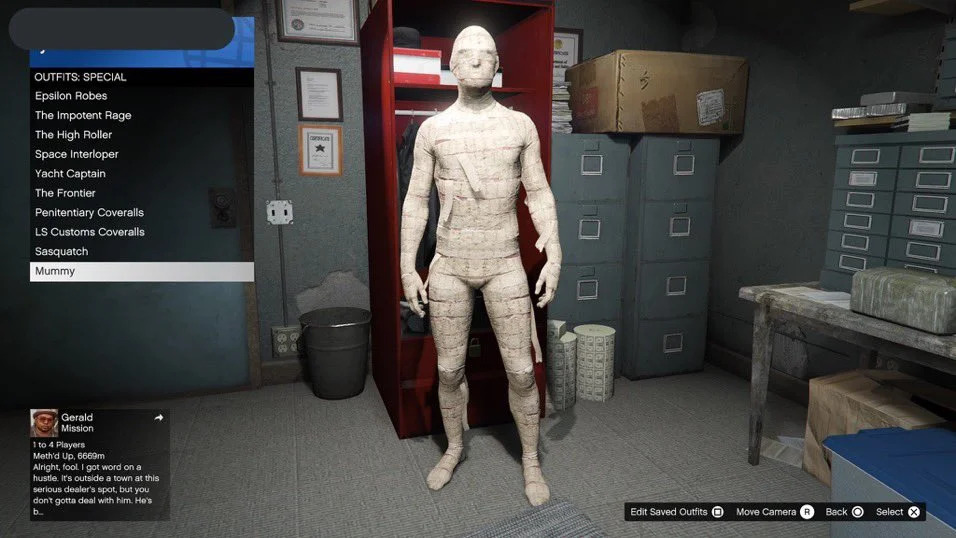 GTA Online has got a thing about strange creatures. Whether it’s your more mythical Sasquatch types or the more commonly spotted Aliens, there’s a certain flavour of madness to the world of San Andreas.

The team at Rockstar always find a way to go that one step further than merely referencing the weird or wonderful, and now it seems they’re getting ready to add yet another piece of the puzzle.

It looks as though GTA Online is going to give players the chance to cosplay head to toe as a mummy, following a new outfit that has leaked. The question on most fans’ lips is likely, how do you get it? Read on, we’ll give you a look at the outfit, plus all the key details!

How To Get The Mummy Outfit In GTA Online

[Original Story Follows] – At the time of writing, the Mummy outfit is not available in GTA Online and is only viewable via an in-game glitch. Originally dataminers were able to find the Sasquatch outfit in the files of the game following the release of the GTA Online Summer Update, which was The Criminal Enterprises DLC. However, it’s still not available as like a lot of content it’s being held back as drip-feed content for the future.

The Mummy outfit seems to be classified under the “special” category, so it is likely Rockstar are holding it back for a future event. We would imagine that the Mummy outfit is potentially being held back until the 2022 GTA Online Halloween Update is released in October. We also wouldn’t be surprised if it’s also a special reward for GTA+ subscribers for the month of October too. This is just our opinion though, so until it’s been confirmed don’t take it for the gospel.

For now, we’ll have to wait and see closer to the time of release. In the meantime though, you can get a look at the outfit thanks to the screenshot Above (via u/John_Doe_727 on Reddit) and below via @MrGreenGrinch on Twitter. (Twitter accounts now suspended)

That’s everything you need to know about how to get the Mummy outfit in GTA Online. If you’re looking for more GTA guides then follow the links below for more helpful tips, tricks, and explainers.