A peek into the Lands Beyond 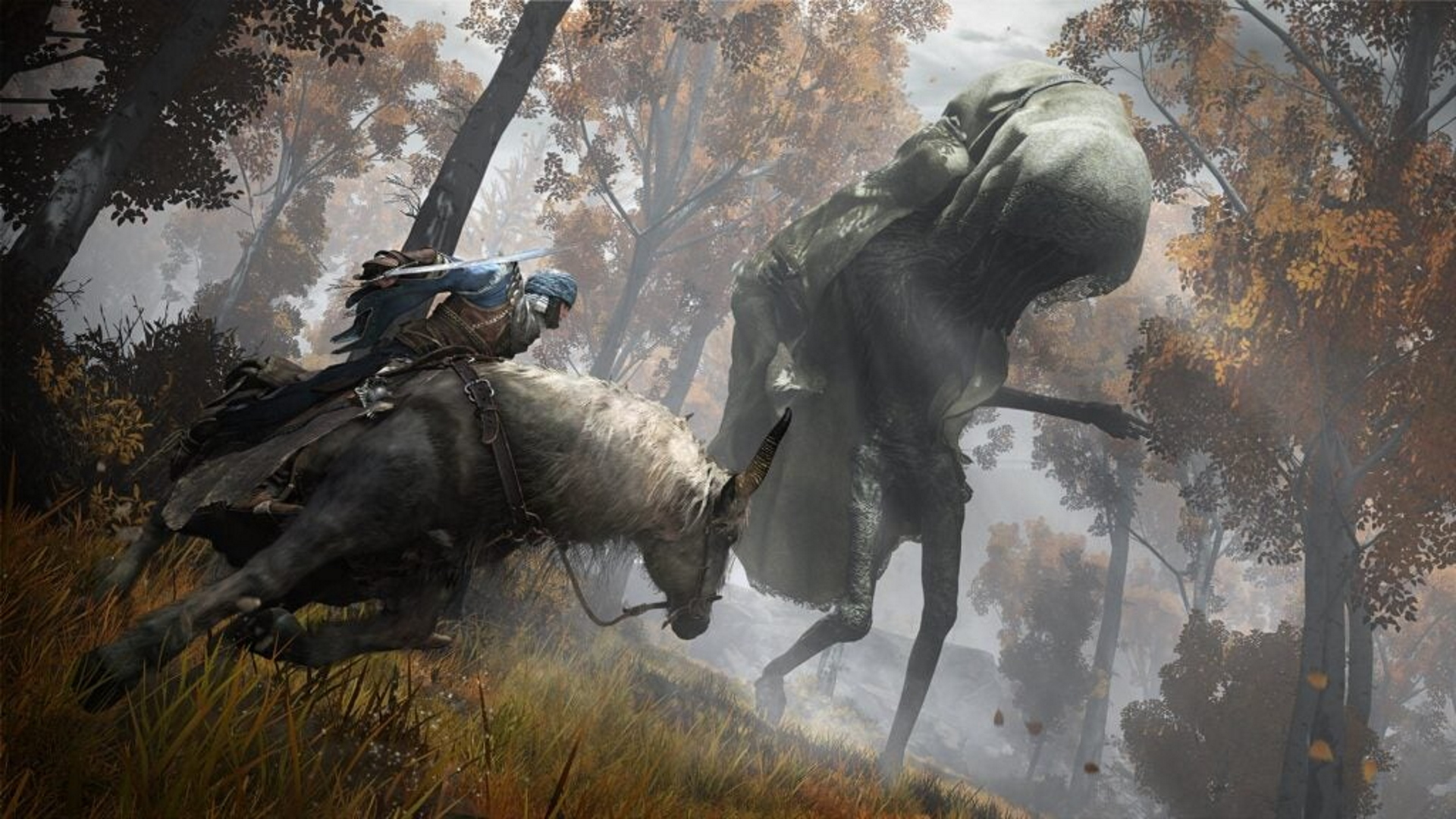 The challenge of your life is only months away. Cut from the same cloth as the Dark Souls and Bloodborne series, Elden Ring is sizing up to be one mammoth of an experience. However, while it bears quite the resemblance to the Souls games, FromSoftware’s latest project is steering the action in a fresh direction. We jumped into the recent Network test to go hands-on with Elden Ring and there’s a lot to unpack, so here’s everything we’ve learned so far. 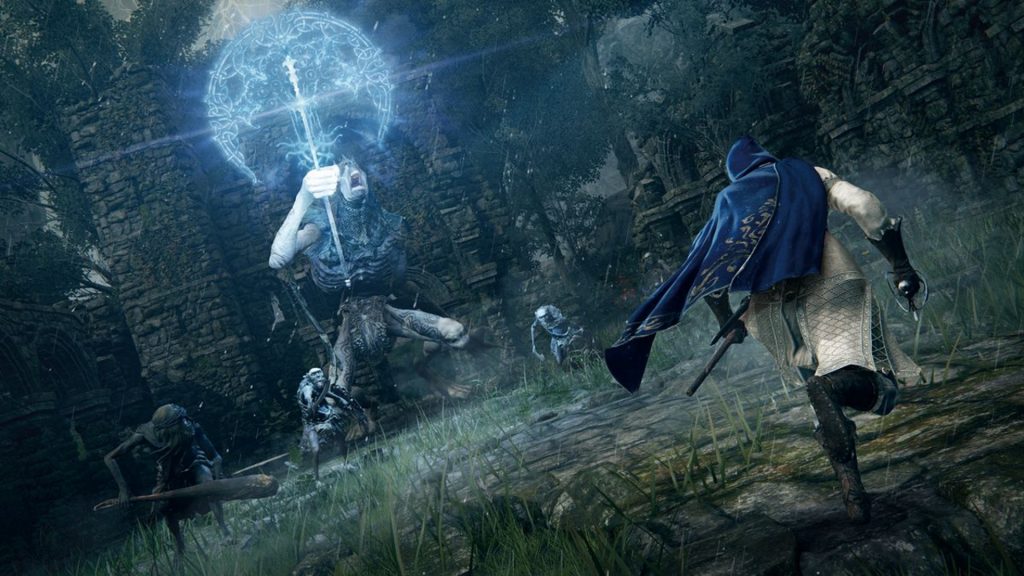 Elden Ring is is open world game, which means there’s even more room to fill with brutally tough bosses.

What Is Elden Ring?

At its core, Elden Ring is an action RPG from the developers of Demon’s Souls, Dark Souls, Bloodborne, and Sekiro: Shadows Die Twice. From dark medieval fantasy to the brutal warring samurai — FromSoftware had seemingly done it all. Elden Ring looks set to change their direction back to both the familiar, yet wholly unique territory.

With a world designed in collaboration with Game of Thrones author George R.R. Martin, Elden Ring takes place in the realm of the Lands Between. The titular ring has been destroyed, and its remains are now scattered around the world, referred to as The Great Shards.

It all sounds very intense, doesn’t it? That’s just the tip of the iceberg when it comes to the complexities of Elden Ring’s lore. But what about the gameplay itself? Well, Elden Ring has a few tricks up its sleeve even for seasoned Soulsborne players.

From has implemented a pseudo-open world approach before, with the intricate level design of Dark Souls and Bloodborne, respectively. But while each area of the map seemingly weaved together seamlessly, there were plenty of caveats due to the hardware power of previous generations. Now, this doesn’t seem to be an issue for the developers, as Elden Ring will adopt a Ghost of Tsushima style approach to its open world.

If you can see it in the distance, chances are you can likely go there and encounter some ghastly enemies. Putting a focus on your curiosity to explore, Elden Ring will have plenty of rich details to uncover as you traverse its cursed lands. There are no objective markers on screen, either — instead, some subtle environmental suggestions will point you to your main goal (much like the wind in Tsushima). The world itself will look gorgeous, too, on next-gen hardware, with a ray-tracing patch planned for release further down the line.

Similar to the Elder Scrolls series, dungeons appear aplenty within Elden Ring and are optional to descend into. You’ll often find yourself going off the beaten path as you explore, so the risk-reward factor is definitely present if you decide to take a wander. Each dungeon will ultimately conclude with an intimidating boss encounter, but defeating them will lead to acquiring some seriously good loot, as well as leveling up your character. 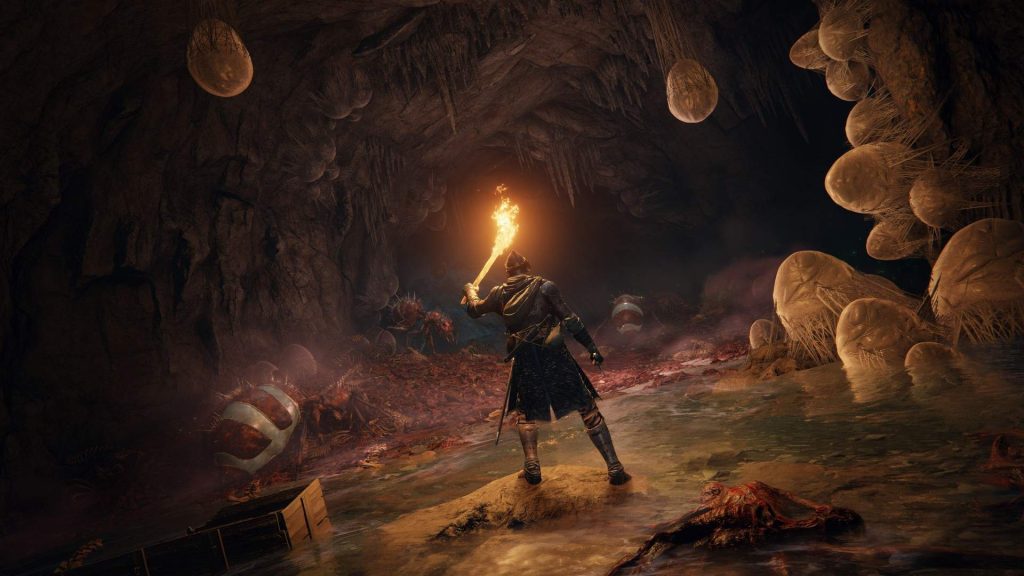 Dungeons will see you delving deep into the dark, and uncovering monstrous foes to battle.

Danger (and Dragons) Lurk Around Every Corner

Beware, because – just like Dark Souls – here be dragons. Enormous, fire-breathing dragons. In Elden Ring, they’re roaming the land and even in the depths of swamps. You’ll no doubt veer off the beaten path to sabotage enemy camps or find mythical weapons lost to the mystery of the world.  When you do, you should be prepared to meet fearsome foes as a result. Bosses are waiting all over Elden Ring’s map, but so too are rewards.

Interestingly, crafting is also included in Elden Ring. You can now turn plants into potions and even bones into throwing knives. It might seem like a lot of walking to explore for resources, but don’t worry, you’ll have a trusty steed to traverse the world with. Eventually, you will die within Elden Ring, but like many of the “SoulsBorne” games before it, you can respawn at Sites of Grace, which are effectively bonfires.

Pick Up Your Sword and Fight

For most players, combat is where the heart of a From game lives and dies. Fortunately, the developers have always delivered the goods in this respect. Elden Ring will be bringing the same punishing-yet-fair combat players of the Souls series has come to love, with new mechanics such as the “counter” entering the fold. Used to stagger your foe in a similar fashion to the infamous parry mechanic, the counter can be a great way to assert dominance over your enemies.

Enemies deal hefty damage, but, like the Dark Souls series, you can read their movesets to learn the telegraphs for each attack with some practice. If there is one thing to note with any of these games, it’s that practice always makes perfect.

Want to specialize in magic or maybe become a noble swordsman? Class selection returns in Elden Ring, meaning you can pool your efforts into specific skill areas to make your warrior, wizard, or nobleman worthy of tackling the toughest of rivals. Each class has access to drastically different skills and spells, the latter of which seem to be set for a bigger part than usual in a FromSoft game.

The genre isn’t known for stealth as such, but Elden Ring will allow players to crouch and backstab enemies in an efficient manner. Weapon upgrades return too, but it seems as that you won’t be able to enchant them like in Dark Souls. This time, the lightning sword stays in the cupboard, unfortunately. Instead, the Ashes of War are an alternative that will alter the special attack of your chosen weapon (and can be applied to multiple weapons in your arsenal).

We barely scratched the surface of the Ashes of War effects during the Network test, but you can expect them to play a massive roles in determining your approach to combat and challenging boss fights.