5 Best Alien Games of All Time

Alien: Covenant has been slowly creeping up on us, and all of a sudden it’s here, screeching and spitting, and generally scaring the s*** out of everyone! In celebration of Ridley Scott’s latest entry into the Alien movie franchise, we thought it’s the perfect time to look back on some of the best Alien games ever released.

Starting off our list of best Alien games is Alien Trilogy for the PlayStation 1. Developed by Probe Entertainment and published by Acclaim Entertainment, Alien Trilogy took all the best parts from the first three movies and created an interactive experience that would make any Alien fan proud.

With 30 levels to play through and three Queen Aliens to kill, the game was chock full of content for an early PlayStation 1 title. Players would take on the role of Lieutenant Ellen Ripley, as she attempts to fight her way through a human colony destroyed and overrun by the Aliens, board the crashed Alien ship, and finally escape. It was one of the earliest FPS Alien games ever released, and remains one of the best.

Alien: Resurrection was another grisly addition to the Alien game franchise, and one that was leaps and bounds ahead of its prequel, Alien Trilogy. It’s amazing what difference four years’ worth of video game graphical progression can make, as Alien: Resurrection really harnessed the power of the PlayStation 1.

Praised for its terrifying atmosphere and horrifying moments, Alien: Resurrection set a new standard for what can be achieved in the first-person survival horror genre. Playing again as Lieutenant Ellen Ripley, players must try and escape a research ship completely overrun with the xenomorph.

An interesting addition came in the form of potential infection. If you were implanted with an Alien egg, you had to stop what you were doing and track down a device to remove it. This small mechanic added to the terrifying atmosphere of Alien: Resurrection and cements it in our minds as one of the best Alien games.

Aliens Versus Predator: Extinction won us over due to its multiple-perspective campaign style where players could take on the role of each of the main characters in the Alien series: Aliens, Predators, and Marines. Where usual RTS games relied on creating buildings, the Aliens Versus Predator: Extinction campaign focused solely on unit management as opposed to the creation of buildings and vehicles.

Each of the three campaign perspectives would use different means of increasing the amount of units you had. Marines would kill enemies and upgrade atmosphere processors, Predators would attract new members to the clan by collecting skulls from the fallen enemies, while Aliens would create a Queen who would create more eggs, leading to more Aliens.

Prior to Aliens Versus Predator: Extinction, Alien titles had been either first-person shooters or third-person sidescrollers, this was a unique and memorable entry into the series, and one of the best.

Released on the Super Nintendo and the Sega Genesis, Alien 3 took the beloved franchise and translated it into a sidescrolling action adventure game, but packed with far more Aliens. The fans of Alien 3 will likely remember arguing with friends over which version was better, the Super Nintendo or the Genesis.

Taking control of a shaven-head Ellen Ripley, Alien 3 tasked players with fighting through countless Aliens on a prison planet. Thankfully, unlike the movie with its singular Alien and no weapons, Alien 3 had hundreds of enemies to slay and weapons to kill them!

Another high point of Alien 3 was the thumping soundtrack that backed every level as you completed an array of tasks. Each mission required you to reach the end, but not before completing objectives such as saving hostages, repairing electrical circuits or sealing doors. The whole story culminated with one of the most memorable endings of an Alien game to date, with Ripley sacrificing herself to save the day. Game over, man. Game over. 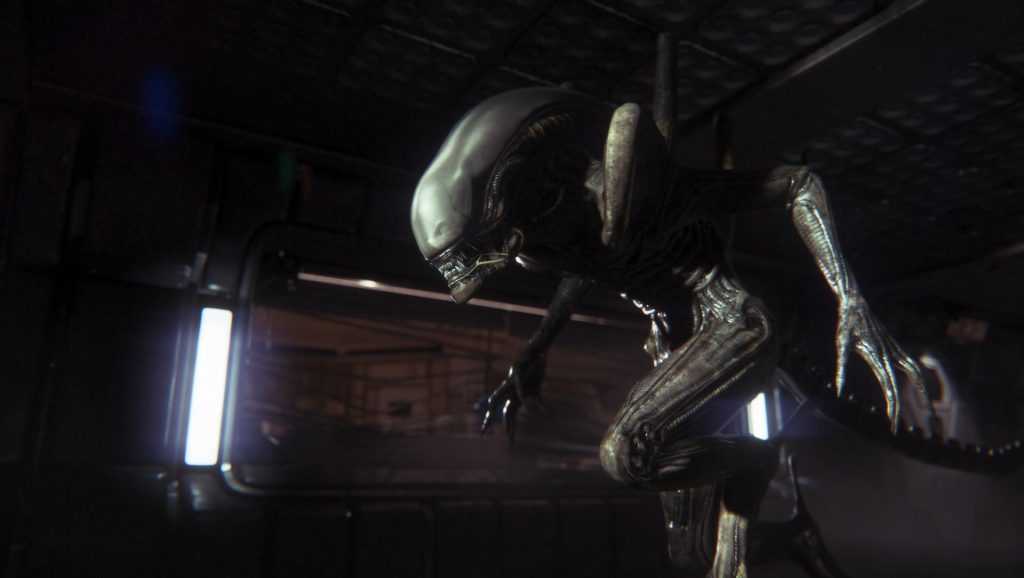 This list of best Alien games ever released would not be complete without mentioning the phenomenally successful Alien: Isolation. For a long time, people had wanted an Alien game that struck a chord with what it felt like to be in an Alien movie. Colonial Maries came close, feeling like a marine fighting an unstoppable force, but people wanted the original terror and survival horror.

Alien: Isolation, unlike the previous titles, demanded you fight, and preferably avoid, a single Alien creature throughout the entire story. Instead of easily killing dozens, you were able to develop true fear toward this intelligent lifeform. You grew a deep respect for this enemy. You slinked through the halls, outwitted it, and eventually sent it packing – but not without having your pants scared off.

What made Alien: Isolation truly terrifying was listening to the Alien creep around in the ceiling or hallways. Using a headset like the Elite Pros with the Tactical Audio Controller heightens the entire experience, as all outside noise is cancelled and the only thing you can hear – thanks to the Superhuman Hearing – is the exact location of the Alien. This is nerve-wracking, especially if you’re hiding in a locker and can hear precisely where it is, willing the Alien to simply wander off and away.

Alien: Isolation delivered it all, a story that took place alongside James Cameron’s Aliens, atmospheric horror – much like the recent Outlast 2 – and gameplay that was expertly tailored toward stealth and intelligence, instead of run ’n’ gun and brawn. Alien: Isolation is without a doubt, one of the greatest Alien games ever released.

Now that Alien: Covenant has burst onto the silver screen, we think it’s time for another Alien game to skitter around and bury itself into our consoles. There are a lot of excellent Alien games out there, but we think the above five are the best Alien games ever released. Do you have a favorite Alien game and movie?